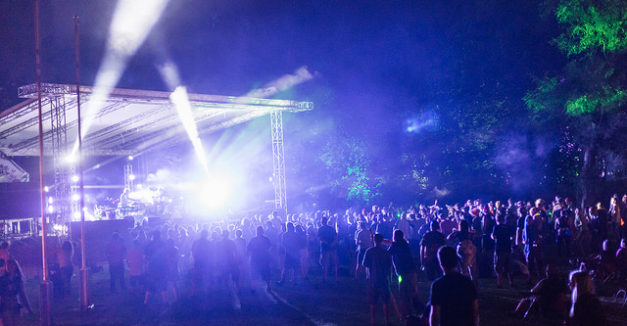 Camping and music met again at last weekend’s Hullabaloo Festival. Concertgoers gathered at Sokol Park in Bellevue Nebraska to take part in the 9-hole frisbee golf course, midnight movies, and forest walks as well as jam out during the 3 day festival.

This year’s concert lineup was curated and headlined by the Kris Lager Band. Check out Saturday’s photos below, taken by James Dean. 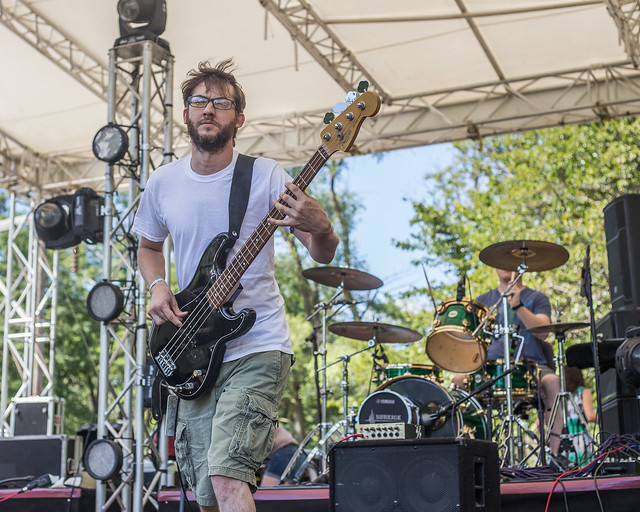 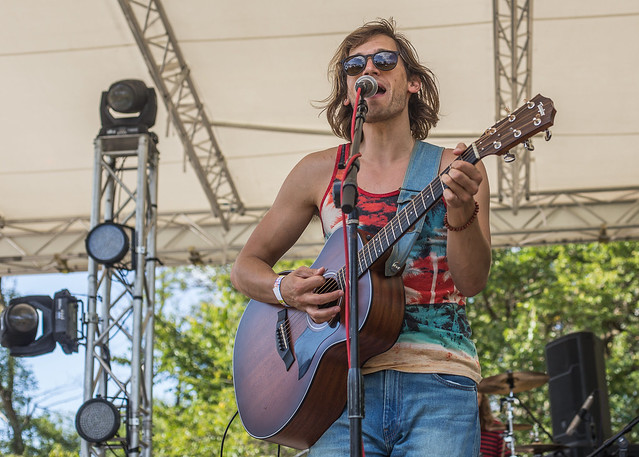 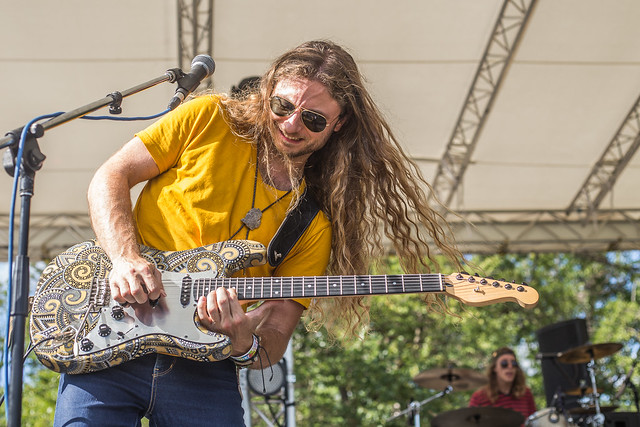 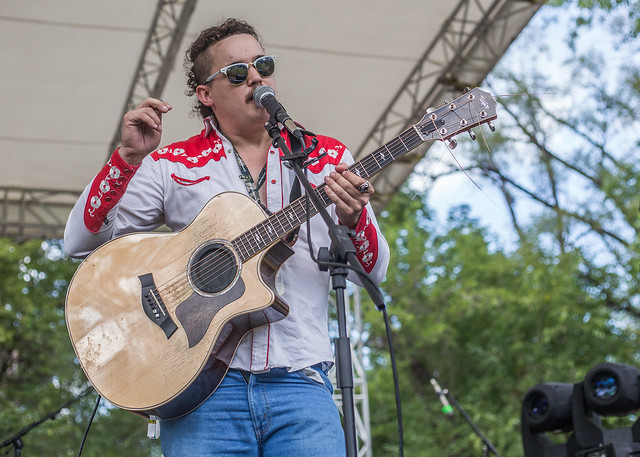 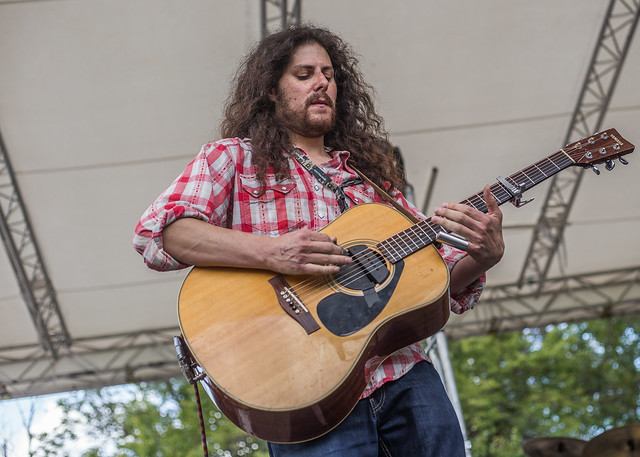 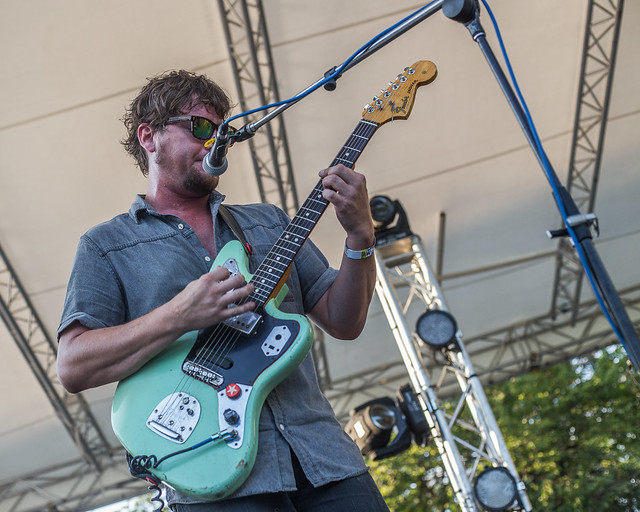 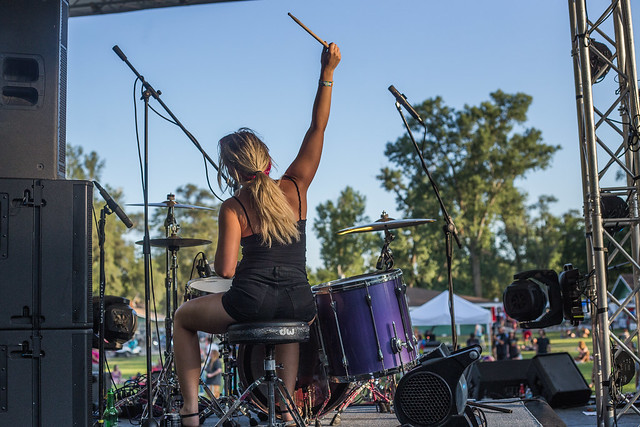 Henry and the Invisibles 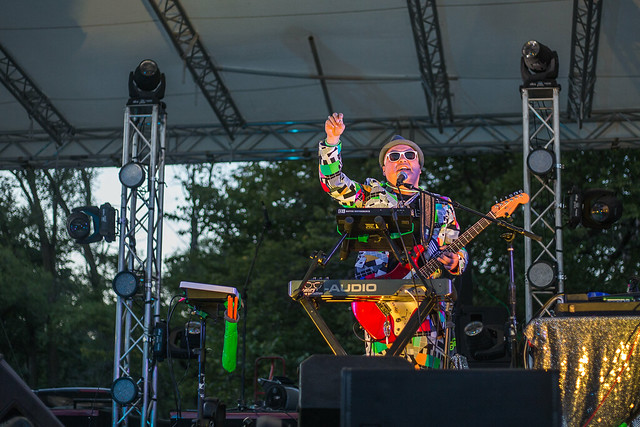 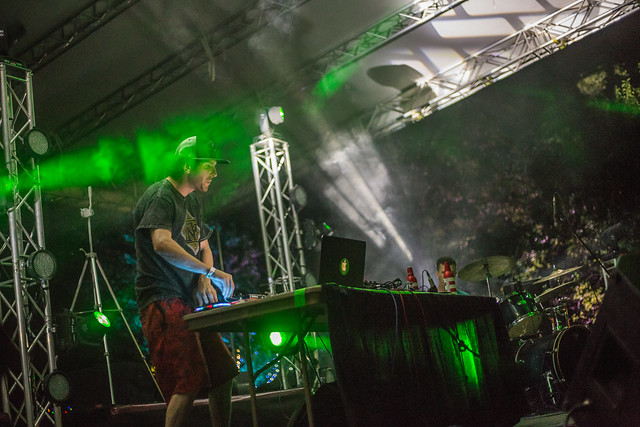 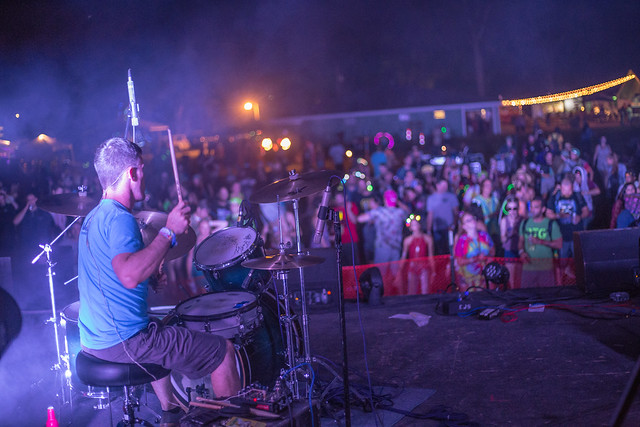 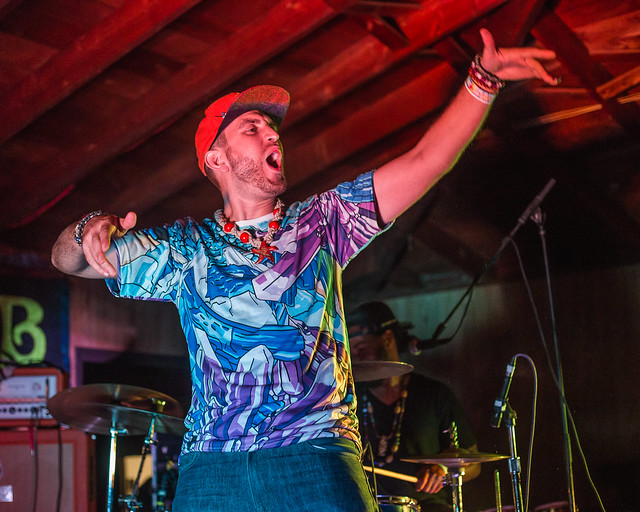 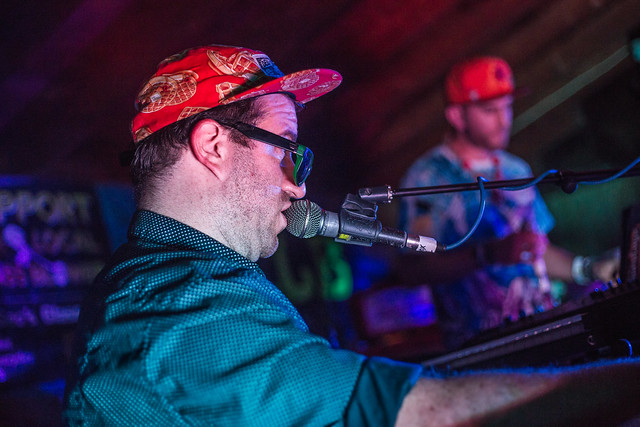 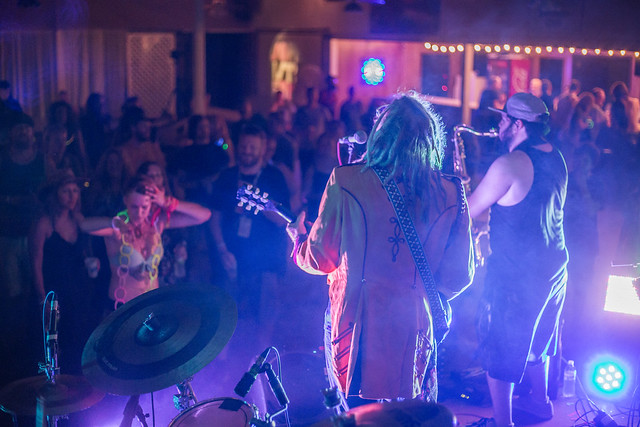 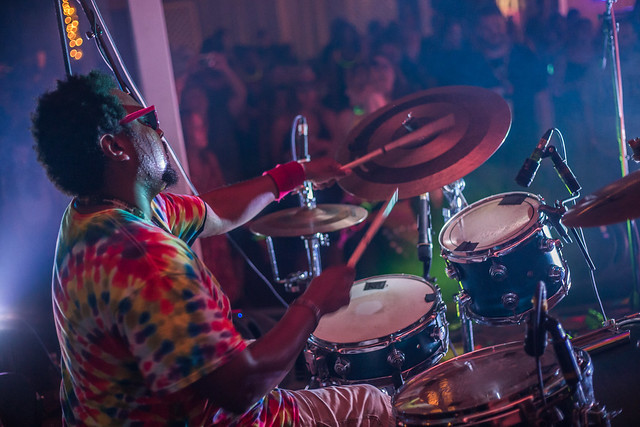 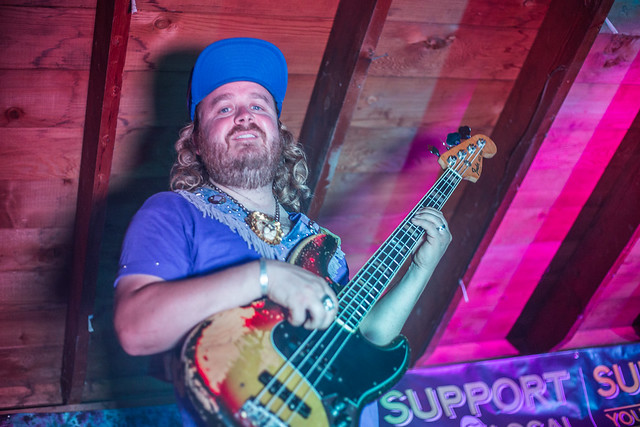 The Shrinks are newcomers to the Omaha music community, but they’ve quickly established their post-punk/gothwave style. Seemingly coming out of the darkness, their self-titled demo was quietly released in April. Since then, they’ve joined the miniature wave of goth bands being steamed out of the woodwork.

Shrinks are Blake Kostszewa on vocals and keyboard, Blue Petersen on guitar, and Josh French on bass. HN caught up with Petersen and Kostszewa after their set at Milk Run last Thursday.

Blake Kostszewa: Me and Blue has talked about this a lot. In our opinion goth is not so much a genre of music; it’s a satire thing to us. Like, I think that if we were to classify our music we would say post punk, wouldn’t we?

Blue Petersen: Yeah.
BK: We wouldn’t really say that it’s goth. Look at bands that are pretty similar like Joy Division and Bauhaus – who’s more goth out of those two bands?

HN: I would say Bauhaus.

BK: Why? Because they sing about vampires and weird shit? It’s almost a satire thing.
BP: It’s more like an aesthetic. Goth is a lifestyle, OK?? The real question is why are we being goth. It was half a joke as first, but we really enjoyed it. We couldn’t be in a post-punk band and wear black lipstick.

BP: You could, but people call you goth!
BK: Recently we’ve kinda ventured off of that and gone towards shoegaze, which ended up being gothgaze.
BP: Dark shoewave.

HN: Who writes your songs?

HN: Out of the Shrinks songs which is your favorite?

BK: My favorite song is “Darkness” to be honest. That song was pretty much all of us at practice playing randomly. I just held down one note and started singing random shit and it ended up being a song.
BP: Which is kind of cool because that’s the song we want to follow that direction. It’s cool that it came from an organic, just playing… and then all of a sudden, ten minutes later it was done.

BK: It was the fastest song we ever wrote and when we recorded it and listened it was like, “this is what we’re trying to do.”

HN: What is your favorite song by somebody else about?

BK: Blue’s favorite song is “When You Sleep” by My Bloody Valentine. [He hums it.] Blue plays that every time we get in the car.

HN: Are you a political band?

BK: I tried to be once. Remember that? We were playing this fast instrumental for a while. We called it “Nonsense” and I just started yelling “Fuck George Bush, Fuck Ronald Reagan” and all these Republican presidents! Blue and Josh both told me not to do it live!
BP: We tried, but we write more and more songs that are really personal, not political.
BK: We’re goth; the only mayor is Dracula in Transylvania.

HN: Does depression run in the family?

BP: Yeah.
BK: You’re just implying that we have severe depression! We do. I would say most of our songs are about being depressed.
BP: Yeah, I’m feel like everyone in our families are pretty depressed and alcoholics, so…

BK: It’s hard not to be depressed. You have some harsh fucking winters. And then you go to the summer and finally you can go outside, and you can’t control yourself. It happens to me every time. In the winter I’m stuck inside so I can’t make a fool out of myself. This summer I’m trying to lock myself down a little bit.
BP: I’m out every night.

BP: Us.
BK: I don’t think it’s a genre of music. Plack Blague is goth-acting but he’s very industrial- sounding.
BP: Recently the Joslyn released thousands of bats in the garden. As far as I’m concerned that’s pretty much the gothest shit. “Hey, let’s hang out at night and release thousands of bats and hang out with ‘em!”

HN: Who is the gothest presidential candidate?

BK: Bernie Sanders. Goths for Bernie Sanders.
BP: There’s great shirts. It’s like Bernie’s hair with horns and like, bats in the background. I mean he’s the most upset and most disillusioned.

BK: He’s the closest to living in the same time…

HN: Do you just mean he’s the oldest?

HN: What’s next on the Shrinks’ calendar?

BK: Maybe moving.
BP: We’re playing with Protomartyr and No Thanks, which is exciting. We got offered a slot on a post-punk/goth festival in Portland and we’re trying to move out there and live there.
BK: We’re planning on releasing something fuller length, somewhere around 7 or 8 songs.  I think we’d agree that we’re more of a recorded band than a live band. I’d like to do that before we leave, if we leave.

After this interview, Shrinks announced their last show will be with Protomartyr at the Slowdown August 12. RSVP here. 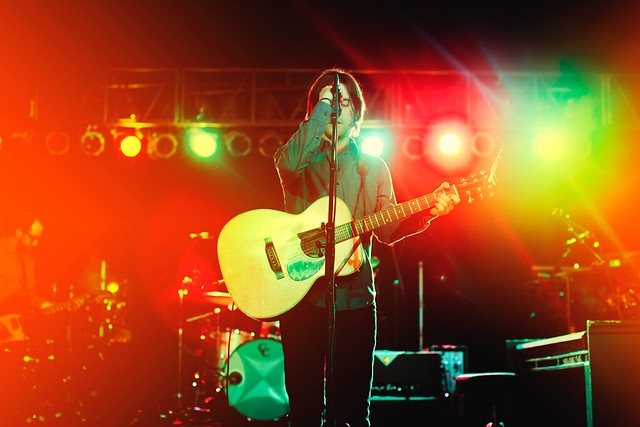 The box set is titled The Studio Albums 2000-2011 and will be available in stores on September 26, 2016, but according to Saddle Creek Records, pre-orders are scheduled to arrive via post on or near the release date.

The box set, which will include Bob Ludwig-remastered copies of Fevers and Mirrors, LIFTED or The Story is in the Soil, Keep Your Ear to the Ground, I’m Wide Awake, It’s Morning, Digital Ash in a Digital Urn, Cassadaga, and The People’s Key, will be available in both CD and colored vinyl variations.

The vinyl box set will carry with it some exclusives. In addition to being a limited run of only 5000 sets worldwide, it will include 10 colored LPs, a foil stamped linen wrapped box, twelve 8 x 10 photo prints from photographer Butch Hogan, an essay by Nathaniel Krogan and a digital download card.

The CD box set will be limited to 1000 sets worldwide and will also include a foil stamped linen wrapped box.

The remastered albums will also be available individually on black vinyl and CD in early November. Although they will be available for pre-order in the near future Fevers and Mirrors and LIFTED or The Story is in the Soil, Keep Your Ear to the Ground will be released on November 4th. The rest will release the following week.

The box sets are available for pre-order via the Saddle Creek Records website. The vinyl set will cost $150 to U.S. customers, while the CD set will ring in a bit less at $60.

The Church and Psychedelic Furs at The Rococo in Lincoln, NE.

1980s Australian dream-pop and psychedelic squad The Church will be playing an 18+ show in Lincoln tonight, joined by British New Wave outfit Psychedelic Furs. General Admission tickets are $25 and will be in the 3rd floor balcony. Dance floor tickets are reserved and will cost $50. RSVP here.

$1 Beer Night is back at Duffy’s and so is the music.

Plus, British blues rock singer Joanne Shaw Taylor and opener Hector Anchando Band at The Waiting Room in Omaha. Doors at 8:00 p.m., tickets are $18 tonight at the door. RSVP here.