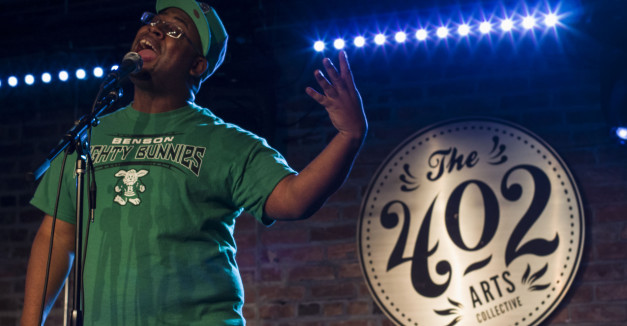 You might have seen the local controversy unfold between Omaha artist Dominique Morgan and the venue 402 Arts Collective last week on Facebook.

You can find the full sequence of events that led to Morgan’s album release show being cancelled on both the artist’s and the venue’s Facebook pages. Many observers clearly felt the show cancellation was an act of censorship and discrimination against Morgan, who’s a socially progressive artist and the founder of Queer People of Color Nebraska. Morgan is also a Hear Nebraska contributor, and the creator of the “I Am” series.

Ultimately, the booking agent — who sent emails to Morgan referencing an “agenda” — has been let go. 402 executive director Ben Shafer has apologized to Morgan and would welcome him back. And the nonprofit organization, which seeks to cultivate “a vibrant network of artists … committed to impacting culture and serving the community,” has updated and clarified its policies regarding performer speech.

Shafer says 402’s actions veered from normal procedure when the venue’s show-booker initially emailed Morgan on April 22. With no official speech policy, 402 typically has verbal agreements with artists about keeping performances appropriate for children. Shafer says he, personally, was familiar Morgan’s work, and did not anticipate any surprises with his performance from the outset.

“We knew [Morgan] was an activist and [that] he takes his role as an artist and his role as a change-agent in our city very seriously,” Shafer says by phone. “He’s a passionate dude.”

“[The sender] basically said ‘the fact that you’re gay and that you choose a different lifestyle [is] offensive to children,’” Shafer says. “That’s what he communicated to the world and that is absolutely not right. We absolutely do not believe that here at the 402.”

Morgan says he was taken aback and upset when he received the initial email from 402’s booking agent.

“The words ‘agenda’ and ‘lifestyle’ seemed to jump at me,” Morgan told us via email. “I was in a room full of artists at Icon One Music [Morgan’s label] and I literally passed my phone around the room to make sure I wasn’t overreacting.”

In the wake of these events, Shafer says that 402 Arts Collective will institute a formal speech policy, which will include a written, signed agreement from artists prior to performances. They also plan to approve all shows through a three-person committee. Shafer says he wants to make sure 402 can continue to provide all-ages entertainment.

“We want to support the community and give young people a place to express themselves in a safe environment,” he says.

Morgan says he’d play 402 again, if he found the overall message of a potential show to be fulfilling.

“I wouldn’t do it just because,” Morgan says. “Maybe with a lineup of LGBTQIA artists or amazing artists of color. At the end of the day I think that email was saying ‘don’t be you.’ At my core, these are the causes I represent.”

Morgan’s rescheduled album release will be May 8 at Barley Street Tavern. RSVP here.

Twinsmith’s forthcoming Saddle Creek album, Alligator Years, is now only forthcoming in a nominal sense. The record is now streaming in full via CMJ.

Expect our review early next week. And catch the album release show May 15 at Slowdown with new Omaha bands Healer and State Disco.

The State Games of America has finalized live music entertainment for its participants, with a lineup aimed at showcasing local talent.

The weeklong event, to be held in Lincoln and Omaha from July 28 through August 2, will bring together past champions of State Games from across the nation to compete in various team and individual events. According to its website, the State Games of America is the largest Olympic-style sports festival in the nation, and is expected to draw 20,000 athletes to compete in more than 60 sports. That means a lot of eyes and ears on the 17 acts slated to perform.

Concerts are scheduled at Lincoln and Ralston competition sites for Thursday, July 30 and Saturday, August 1. Admission is $5, or free with SGA Super Pass. The lineups are listed below:

There’s a few shows on our music calendar today. If you don’t see yours or one you’re looking for, let us know, or add it using the “Contribute” button on our site.

Otherwise, the Kentucky indie rock band Buffalo Rodeo continues its three-night stint in Nebraska — after a Sofar Sounds Omaha set on Monday and a show at Slowdown last night — at Duffy’s tonight. RSVP here. Blét and Clay open the show.