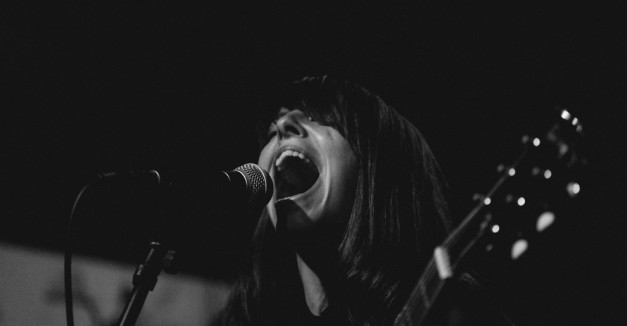 The halfway point of 2015 has brought the usual flurry of mid-year favorite lists from major music publications, and a couple of Nebraska-associated acts have been included among the honorees.

Saddle Creek artists Hop Along check in at number 5 on the Rolling Stone top 25 songs list with “Sister Cities,” the closer to their May 4 label debut Painted Shut. Writer Rob Sheffield heaps onto the pile of acclaim for frontwoman Francis Quinlan’s vocals.

NPR broke its lists down by genre, and included “Waitress” in its top 25 rock songs. It also praises Quinlan’s vocals, saying “[her] voice would kill us even if the perfectly rendered lyrics … didn’t do the job.”

The aforementioned Rolling Stone article also included Desaparecidos, which sits at 21 with “Radicalized,” from June 23 release Payola. Sheffield admits surprise at the strength of the record, also writing “Conor clobbers his slogans with all his customary tact and subtlety, i.e. slightly less than Mother Nature gave a grizzly bear.”

While difficult to pick in any order, it’s no surprise to see either of these bands on lists like these. Hear our podcast team weigh in on both records below. Desaparecidos will be in Omaha Thursday, September 10 to play The Waiting Room (RSVP here).

Before we get to this evening’s shows, take a quick look ahead at the One Percent Productions calendar, which has several new additions this week.

White Girl, the electronic pop project of Kansas City, Mo., artist Martin Bush, returns to the state to play The Waiting Room July 19 (RSVP here). Bush is making the Midwest rounds again after playing both Lincoln and Omaha in April.

In The Valley Below also makes a return on October 27, this time playing The Waiting Room (RSVP here). The art folk duo performed early in day at No Coast Fest in early June, and their return grants a second chance for fans who couldn’t make the daytime slot. Their single, “Peaches,” has been a radio mainstay since it’s release on 2014 LP The Belt.

See the complete additions to the One Percent schedule below, which also include dates with Bazile Mills, Satchel Grande and a tenth anniversary Secret Weapon show.

Today is Canada Day, and what better way to celebrate than with a parade of local acts playing all Canadian hits on one stage. The Waiting Room hosts the event, which will feature performances by Michael Campbell, Vago, 24 Hour Cardlock, Sunless Trio, The Electroliners, Tara Vaughan, The Prairie Gators, Kait Berreckman and Castor. Entry is $8, and there will be Canadian beer and snacks. Crossing our fingers for Alanis Morissette covers, poutine and Jos Louis snack cakes. RSVP here.

Over at Lookout Lounge, Boston punk band Who Killed Spikey Jacket headlines a stacked, international punk lineup. Also slated are Tokyo punks The Erections and South Dakota’s Dirty Rotten All-Stars. Rounding out the bill are Omaha’s D.C.Y.C and Bib, the latter of which will make their live debut. Entry is $8 ($10 for under 21). RSVP here.