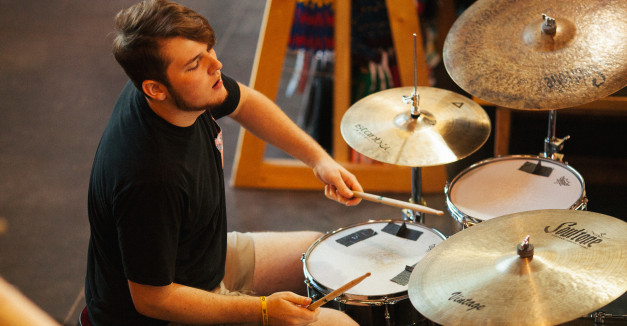 Get ready for Hear Nebraska Vol. 3.

This weekend, we launched a pre-order Kickstarter campaign for our third annual compilation of Nebraska music. It’s our second compilation to be released on vinyl, featuring ten of Nebraska’s most active, exciting and diverse music acts.

We’re honored to have two previously unreleased tracks on the compilation — “Journals” by Outlaw Con Bandana and “Junk City” by Ladyfinger (ne).

Not to mention, it’s just a really great record. Here’s the tracklist:

For $20, Kickstarter backers get the vinyl. For as low as $5, get a digital download. Higher-level rewards include t-shirts, signed copies of the compilation, LP carrying cases, test-pressings and free entry into the compilation release shows.

On Friday, April 17, we’ll host Jake Bellows, The Bottle Tops and Universe Contest at The Zoo Bar (RSVP). On April 18, Bellows, Ladyfinger and Both play The Waiting Room (RSVP).

Omaha hard rock band A Wasted Effort will hit the road next month for a tour down to Texas.

A Wasted Effort’s Derek Talburt tells us this will be the band’s first time touring southward. Texas made sense because the band’s manager lives there and “huge venues,” like Stereo Live in Houston and Gas Monkey Live in Dallas, were draws. It’s officially themed a Spring Break Tour, as the band is playing Corpus Christi’s spring break party.

The band won Best Hard Rock Band in 2013 for the Omaha Entertainment and Arts Awards after releasing its EP Riches to Rags. Check out the dates below the video.

You’ll be seeing more of Super Ghost around.

The post-rock band began in June 2014 as a two-piece but has since expanded to four. Super Ghost released three demos in November. Guitarist-vocalist Jake Newbold and Obi Maina also play in Lot Walks. Pat Stutzman has played in The Decaturs, which recently announced a hiatus.

Super Ghost is touring the Midwest in June and has a handful of local shows coming up. Check out the dates below.

Funk band Funk Trek released a video for “B Balling with Obama” over the weekend. The video was shot at Studio Blue in LaVista earlier this month. Jeremiah Weir shot and edited the live video.

Funk Trek was recently nominated for an Omaha Entertainment and Art Award for Best Progressive/Experimental/EDM.