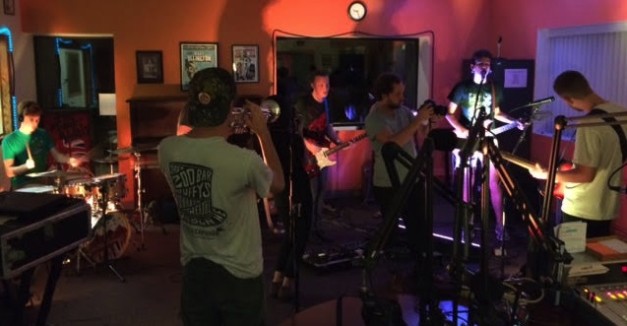 If you are a regular listener of community radio station 89.3 KZUM, all week you’ve heard one programmer after the next espouse the virtues of its existence. Tonight at 8 p.m., Hear Nebraska FM will be on the air to anchor the homestretch with a show I feel exemplifies every reason to support KZUM. Here are a few reasons why.

Mike and Kerry Semrad will join us at 8 p.m. to help kick off the show. Since the very beginning of HN FM and as often as possible, we’ve strived to bring consistent, eclectic, local live performances to the KZUM space. These are musicians, producers, songwriters and emcees who live and work right here in our communities. The voices you hear are in some way distinctly Nebraskan, whether transplanted or homegrown.

If performances like these help the quality of our programming, they certainly — and equally as importantly — help expose audiences to a wide variety of culture and art. We’ve had everything from folk to bluegrass to hip-hop to hard rock and everything in between. You could hear the six-member hip-hop/rock of AZP one week and a soul/R&B singer/songwriter like CJ Mills the next. Two weeks ago, we had one of the largest performances ever in I Forgot To Love My Father — and, to program director Ryan Evans’s memory, the first ever in-studio light show (we’ll publish that video in the coming weeks. Coupled with live interviews, audiences gain insight into these creative minds and their art.

We also like to think these help foster and strengthen the artistic cycle, in some fashion or another. Not only can artists use the show as a platform for promotion, but since we make every effort to record video and audio of each performance, it’s a renewable promotional tool. Add in our weekly all-Nebraska music playlist, and you get a neatly wrapped package bursting with the sounds of our state.

So whether you’re a listener of Hear Nebraska FM or any other KZUM show, please consider supporting community radio during KZUM’s Fall Pledge Drive. Visit the website here, and click the “Donate” button in the top right corner. You can flag your donation for HN FM or any other show. And as always, listen in tonight from 8-10 p.m. via 89.3 FM or live stream at KZUM.org.

In case you needed one more compelling plea for community radio, Here’s what former managing editor and longtime HN FM host Chance Solem-Pfeiffer had to say:

“I stumped for HNFM and KZUM seasonally in my couple years of hosting the show. And each time, the situation — that inherently uncomfortable position of asking for money when you really do need it all the time — asked for some new rationalizing or dressing. It was never hard to come up with a reason to keep funding the station, just challenging to imagine what might connect with someone driving home from a long work day or unwinding in their living room. Clearly, HNFM books Nebraska musicians of every stripe for live in-studios, and with its weekly need for 30-odd songs is the frontlines of sharing new Nebraska with an audience that might never know it exists. Then, of course, there’s the ways in which KZUM touches, motivates and encapsulates the tightknit, but eclectic, crew of Lincoln community members who want to strengthen the city’s collective body, mind and soul. All of this is worth supporting.

But here’s a new way of thinking about it, at least for me. With any sort of media outlet, and let’s choose one that brandishes music in this case, your experience in the audience is curated by someone. A host or producer is using taste, preference and an attempt at objective judgment to bring you the “best of something” or the information that will strike you as relevant. Who the curator is makes all the difference for what arrives on your end. When you support KZUM and HNFM, you’re supporting voices (physical and metaphorical) that are inletting to you, new, old and diverse Nebraska art each week. No one is looking over a KZUM programmer’s shoulder, touting numbers or sponsorships or obligations to outside interests. This is “independent media” as a free organism where that adjective, “independent,” means everything. In several important ways, the person sitting in the studio is like you: someone who cares about the community and about the most inquisitive, impactful and enjoyable art-and-entertainment it’s capable of nurturing. That’s the only directive.

So, invest in yourself and the desire that most of us have to connect with what’s close to us where we live. Be aspirational. You won’t get to all the shows, meetings and events you hope to. Life gets in the way. But don’t sweat it. Just turn your radio on, or fire up your laptop speakers. This show, and this station, are looking out for your best, most involved, most interested, self.”

Opera Omaha’s production of The Barber of Seville opens its two-night run Wednesday at Orpheum Theater, and will feature local performers onstage. A local men’s chorus of 16 will provide backing, while Omaha resident Ron Chavala will play Ambrogio.

Filled with iconic and instantly recognizable music, Rossini’s classic The Barber of Seville remains a perennial favorite. In a comedy of outrageous proportions, the barber Figaro must use every trick in the book to confound the lecherous Doctor Bartolo and bring together the charming Rosina and charismatic Count Almaviva.

Tonight, Opera Omaha runs its final dress rehearsal before opening night. Check in with your preferred local media outlet on Twitter to follow along, as the Omaha Opera will be host “Tweet Seats,” where reporters will be live-tweeting from a specially designated section.

The Barber of Seville is directed by Michael Shell and conducted by Steven White. Find tickets to both Wednesday and Sunday’s performances here. Wednesday’s show time is 7:30 p.m., while Sunday’s matinee starts at 2 p.m.

Eagle Seagull, The So-So Sailors and Little Brazil at O’Leaver’s

The defunct, formerly Lincoln-based indie band Eagle Seagull played its first show in five years at O’Leaver’s Friday. Comprising half original members and half newcomers, it celebrated the ten year anniversary of its debut self-titled LP. HN contributor Rebecca Lowry was on hand, and wrote a few words on the concert, which also featured Omaha bands The So-So Sailors and Little Brazil.

“There’s nothing quite like being stared down by a Face Value-era Phil Collins on a Friday night, other than maybe being stared down by a Solitude/Solitaire-era Peter Cetera or the head of a cardboard cutout of Patrick Swayze. If you’re unfamiliar with the vinyl-jacket sleeve backdrop of the O’Leaver’s pseudo-stage/performance area, the club is one of Omaha’s more storied rock venues and home to Eagle Seagull alum and Live at O’Leaver’s spearhead, Ian Aiello. While you have likely read a handful of accounts of the new patio area, the actual club is forever shoeboxed in with smoke-dingy walls, booze-fused carpet and Crocodile Rockers recounting legends of the shows of yore. Friday night’s crowd of leather jackets and burgeoning winter beards only accentuated the room like a coffee table book or a new aloe plant.

The So-So Sailors frontman Chris Machmuller, seated behind the upright piano staged in the center of the room, cracked a joke or two to corral the full room’s attention before setting out to play. Given the cacophony of synth sounds that has modernized this era of piano rock, sometimes it’s nice to hear the dynamics of a musician’s fingers to the keys in relation to hammers on piano strings. Aaron Markley’s restrained touch on synths left ample room for Machmuller to coax the upright into pulsing life. Sisters Andrea and Kara Purdy’s blended background vocals seamlessly weaved into the soundscape, at moments barely decipherable as voices from another keyboard effect. Literary, epic, at times discordant, the band met Mach’s Salingeresque scores with a practiced and paralleled fervor.

That these established Omaha rockers seem to be playing more new numbers than old could signal a few new albums are on the horizon. The So-So Sailors and Little Brazil, in kind, had sets that left their audience intently listening rather than participating.

Ghosting in with a cloud of noise, Little Brazil drummer Matt Bowen tore through with the full force of the kick drum, jump-starting the night into overdrive. It’s safe to say the Little Brazil sound has evolved with the lineup change–all the usual early nineties influences are present, but they’ve shrugged off their poppier sound for an edgier, almost crotchety rock approach. Possibly raw from the recent Desaparecidos tour, lead singer Landon Hedges’s voice was hemorrhaging emotion. Borderline battle cry at moments, scratchy and still melodic, every word felt important. All the while, Danny Maxwell’s fuzzy, growling bass left every surface in the room abuzz.

The night’s premise and conclusion lie in the reunion of Eagle Seagull. As the audience grew to its largest size, one couldn’t help but wonder once the set began what anyone was really there for. To see? To be seen? Eli Mardock and company put on a fun, no-frills, intimate set, only to be met with a crowd more interested in their own conversation than in the performance. A handful of Lincoln-to-Omaha transplants were up at the front dancing, singing along and enjoying themselves in the front row, but the largely local crowd was positively frustrating. In spite of this fact, Mardock seemed to be in good spirits, playing the old songs and making banter with the band. For those there for the reunion, the night was a raving success.”

HN contributor James Dean went to Duffy’s Tavern Saturday night to catch Freakabout and The Killigans play the season’s final backlot show. Sources say it was one of the busiest nights for the club in recent memory. Check out Dean’s photos below: 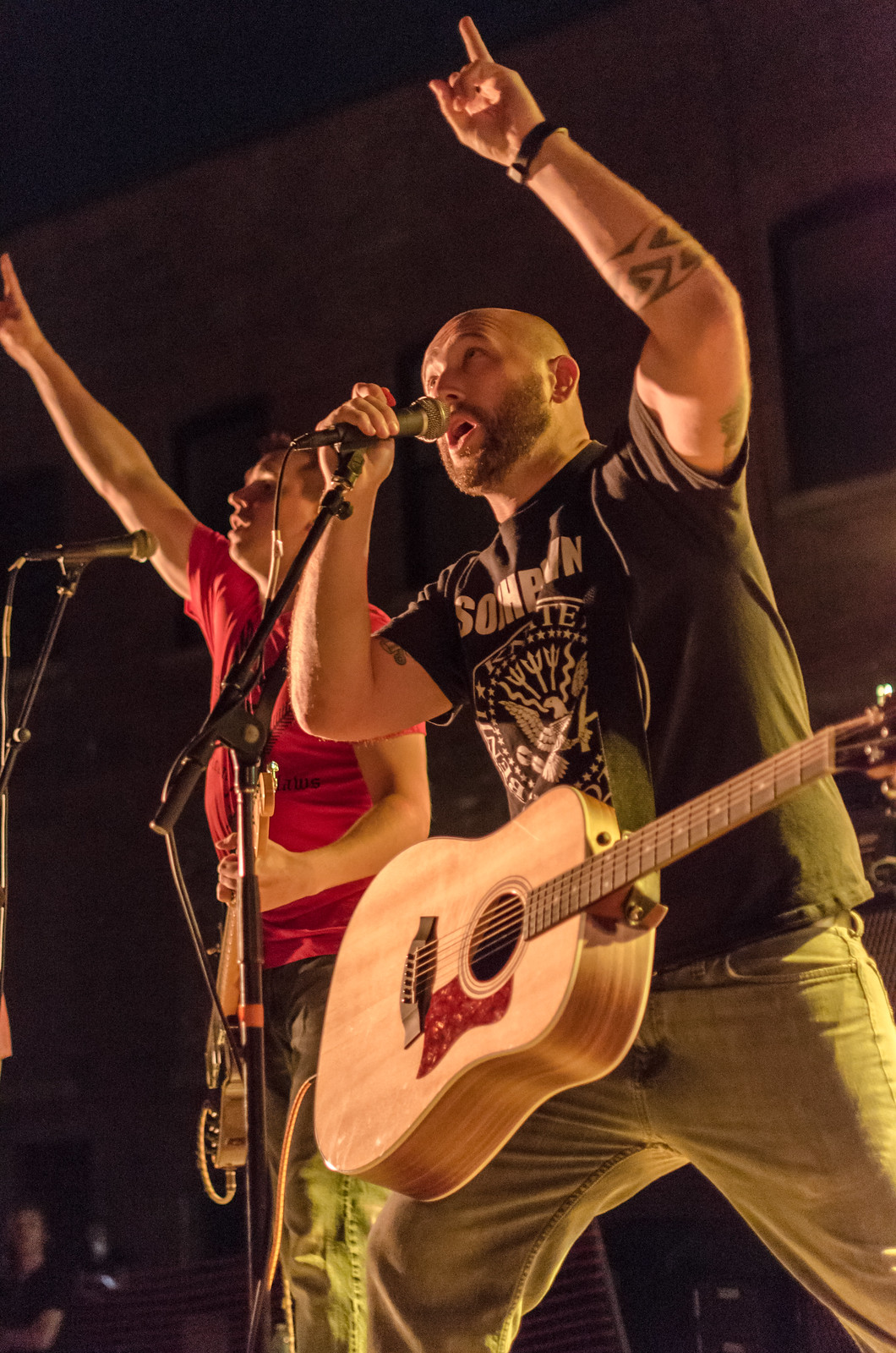 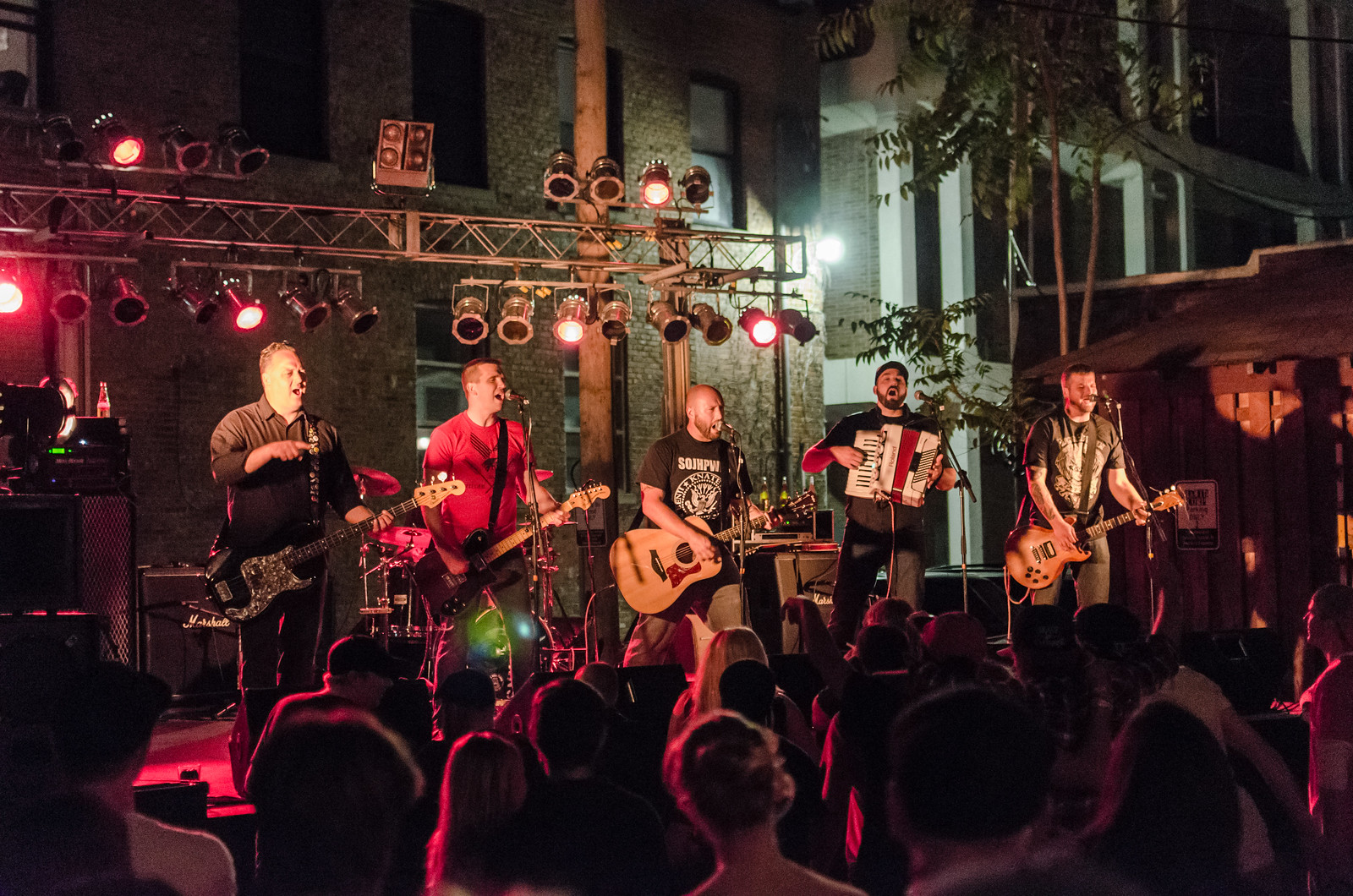 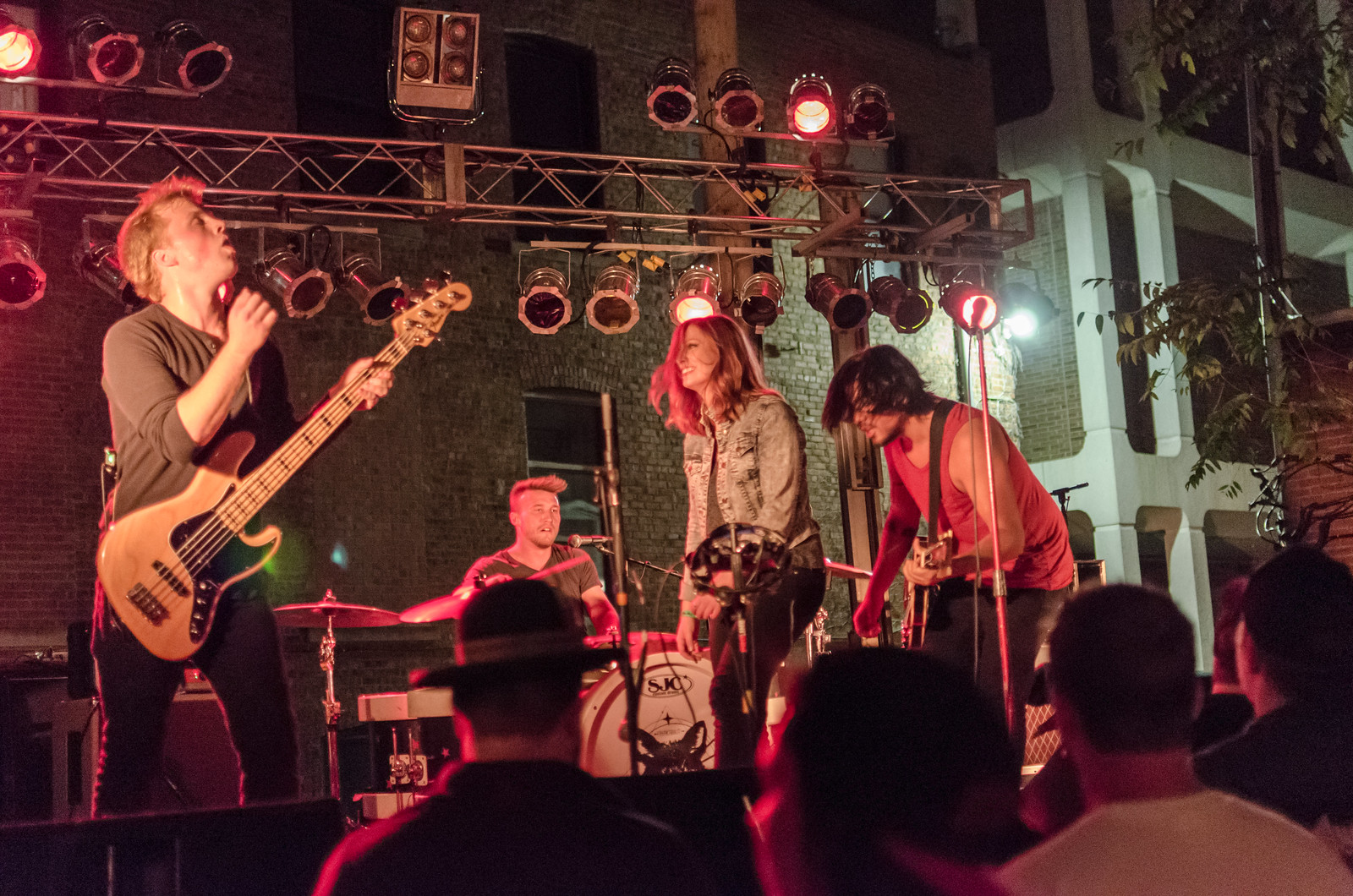 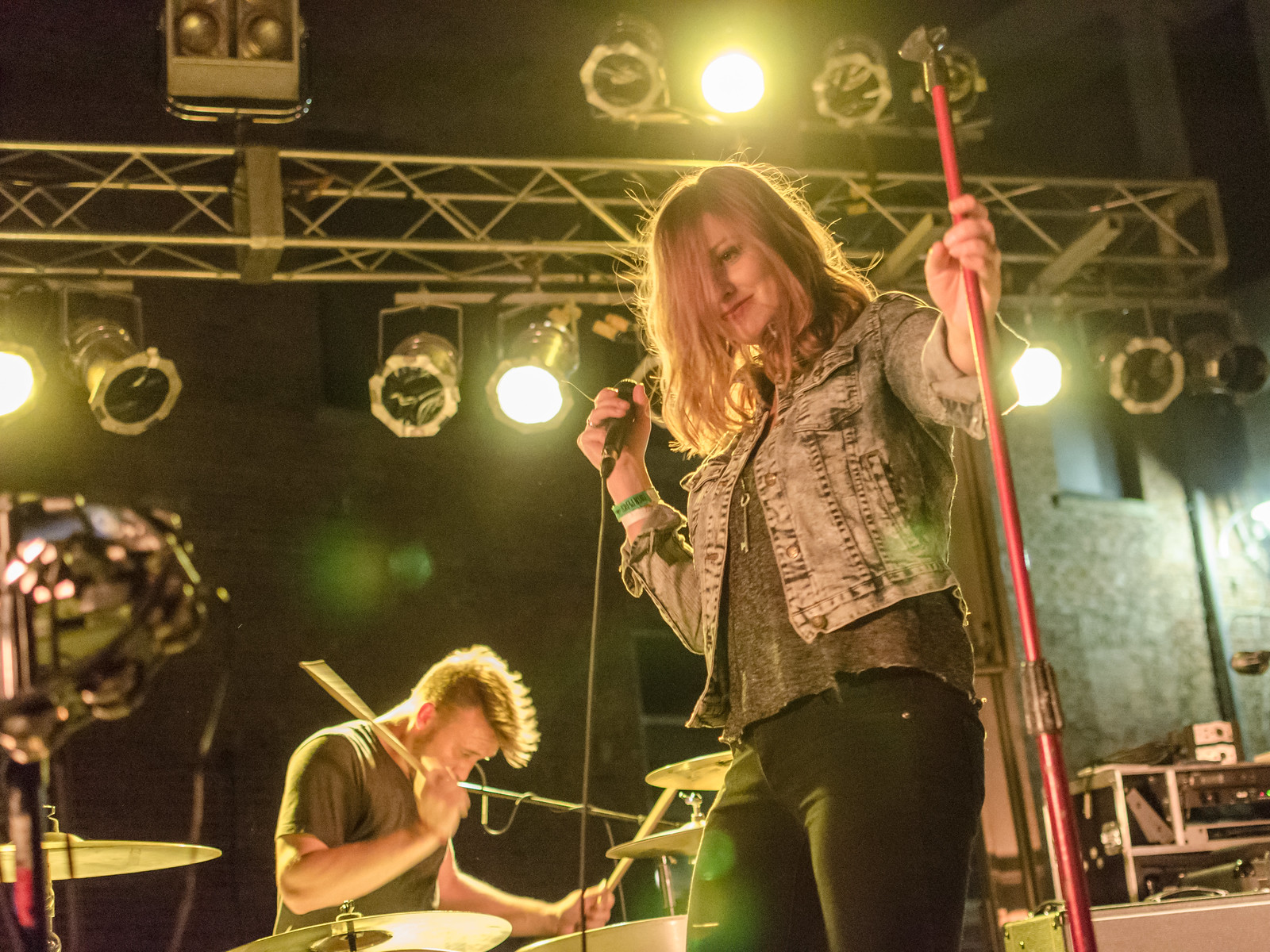