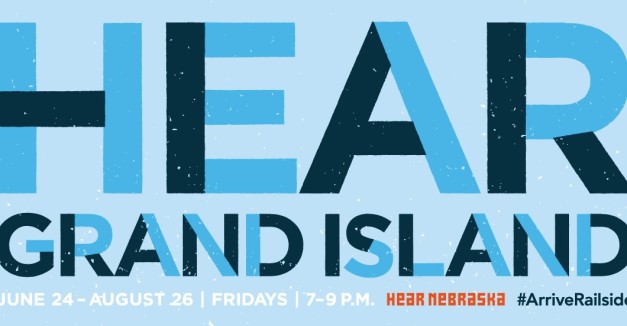 “Grand Island is prime, eager and ready for a concert series and opportunity like this. We’re excited to see the impact on the arts community as well as the quality of life this will have, and it’s only the beginning,” Anson said. “There’s so much talent in Grand Island and not just musically. Being part of bringing Hear Nebraska to GI is exciting — but what’s more exciting is the potential and opportunity that things like this open up for us all.”

“After the Grand Island Good Living Tour show, [Omaha folk songwriter] Simon Joyner mentioned how 20 years ago, no one thought Omaha could have a thriving music scene,” Norman says. “We don’t see any reason why Grand Island couldn’t become known for awesome music culture in Central Nebraska in a similar way. We hope the area’s artists and leaders will be encouraged by this development and be inspired to continue the great work they’re doing in new ways.”

HN’s programming expansion into Grand Island joins the Good Living Tour concert series in the organization’s push into Greater Nebraska. It represents another step toward its vision to make Nebraska an internationally known cultural destination.

“​Everyday, amazing national bands drive right right past Grand Island en route to and from Denver, Kansas City, Des Moines, Chicago and Lincoln/Omaha,” Norman says. “We believe Hear Grand Island is an important step toward developing Grand Island’s music community and industry, so we can start getting more and more of those bands — and others — to play concerts in the city.”

Mellema says events like these benefit their host cities more than just financially.

“Although the economic benefits are very real, the effects go deeper than that; it helps to enhance and deepen our entertainment culture,” Mellema says.

Hear Grand Island lineups and further details are on the way. RSVP to the series here, and stay tuned for future announcements.

An unusually busy Monday begins in Omaha, where Oakland beach punks SWMRS plays Lookout Lounge, 320 S 72nd St, with The Frights. SWMRS comes hot off its debut album Drive North, fittingly produced by FIDLAR frontman Zac Carper. The four-piece has toured recently with Wavves and Twin Peaks. The Frights also released an album in February (You Are Going To Hate This), also with Carper. Local bands The Beat Seekers and The Way Out open the 8 p.m. show. Entry is $13. RSVP here.

And in Lincoln, Brooklyn singer/songwriter Xenia Rubinos plays Vega, 350 Canopy St, with Jacoby Vann. Rubinos blends Caribbean, R&B and indie rock styles together for a unique, soulful sound. Rubinos signed with Anti- Records earlier in the year, and is currently on a U.S. tour. Entry to tonight’s 9 p.m. show is $12. RSVP here.