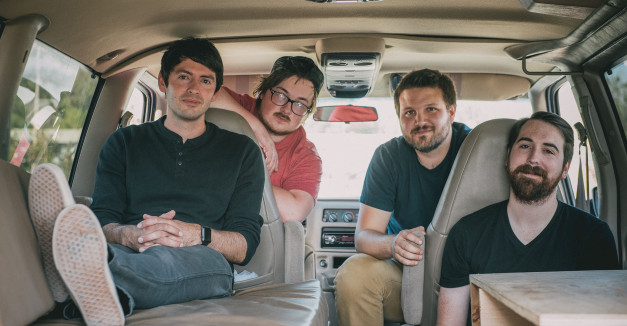 By the climax of Gramps’ new single “Captain Skyhawk,” frontman Django Greenblatt-Seay has surrendered. Crunchy power chords and guitarist Tim Walker’s flaring leads flank his half-spoken tenor as it describes a struggle that comes to a head at the song’s crescendo.

With “Captain Skyhawk” — the first peek at the Omaha quartet’s forthcoming self-titled EP — the band hasn’t reinvented the wheel, but that isn’t necessary. The catchy track falls somewhere between a harder-rocking Wilco and a bouncier, sunnier Saves The Day, and would feel right at home on any road trip playlist.

Gramps releases that self-titled EP the first week of December, and will play the subsequent release show December 11 with Millions of Boys and Uh Oh (RSVP here).

Review: ‘Dust On Our Boots’ by Township & Range

(Editor’s note: the following review was submitted by HN contributor and All Young Girls Are Machine Guns frontperson Rebecca Lowry.)

“Have the Sons of Old Nebraska play my funeral dirge; somewhere in the Sandhills, where the land and the sky converge…”

From the very first line of Township & Range’s new EP, Dust On Our Boots, Omaha’s Travis Linn gives us a taste of the regional, rural fare he touts as the crux of his project. Be it a murder ballad with a plan so cunning that even after draining the “Harjo Slough,” all anyone finds are snakes, or a barn burner about a fortunate night on the Benson strip, splurging on some top shelf libations: the neighbors, the neighborhoods, and the neighboring countryside take seat, front and center, in Linn’s songwriting.

The writing on Dust On Our Boots follows in the traditions of old Americana legends like Jimmie Rodgers, Hank Williams and Woody Guthrie. While Linn manages to keep true to standard Americana sounds, he has successfully merged a traditional-leaning writing style with the fun and fuzz of a guitar pedal or two. Teaming up to fill out the T&R sound are Linn’s old Black Squirrels bandmate Kate Williams on backup vocals and accordion, along with Corey Stroud on bass and Steve Vincik on acoustic guitar.

This Friday, November 27th, on one of the busiest bar nights of the year, there are an abundance of shows to go to in the Big O. If you’re in the mood to hoot-n-holler, the Township & Range crew at Reverb Lounge will give you plenty to shout about (RSVP here)

Your family is going to be in town. Tonight and tomorrow, there will be plenty of chances to escape political incorrectness and football for live music. Let’s get to the run-down.

Tonight, See Through Dresses plays Reverb Lounge with Lawrence, Kan., band La Guerre. The Omaha indie rock band just returned home from its regional Midwest/East Coast tour. This the final show of said tour, supporting the band’s recently released End Of Days EP. La Guerre is Katlyn Conroy, formerly of Cowboy Indian Bear. Of note, this might be the first all-ages Reverb Lounge show (let us know in the comments if there has been another). RSVP to the 9 p.m. show here.

Barley Street Tavern hosts the 6th annual Canned In Benson Food Drive. Performers include John Klemmensen, Matt Cox and many more. Food and cash donations to benefit the Food Bank For The Heartland will be collected at the door. RSVP here.