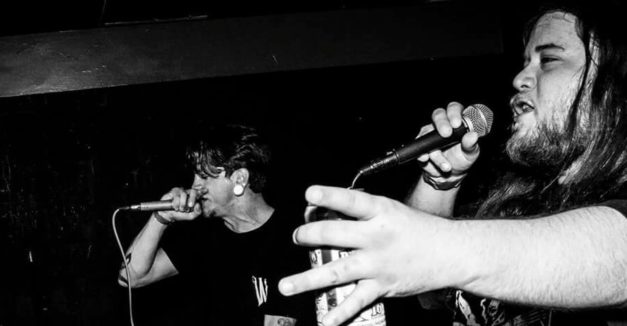 In the movies, “High Noon” is typically when two parties, at such a schism that words fail to find a solution, meet to resolve the conflict with violence: a gun fight, or a brawl, usually a cinematic walk-up or prolonged stare-down.

So from the moment “High Noon” (today’s premiere track) begins, one can feel the blistering sun pour down from the sky and emanate off of the flat, dusty Earth. Or in the case of Omaha rap duo Finch X Kovacs, it’s smooth, hot city concrete.

The group’s hardcore influence permeates the bulk of their work, fueling their intensity on “High Noon.” Travis Finch draws first, words spilling out like quick fire as he describes a man at the edge of his frustrations. Walter Kovacs dives into the second verse, not as backup but as the second wave of unfiltered aggression, drawing a harder, thinner line in the sand.

Listen to the premiere of “High Noon” below:

Two Omaha business partners are throwing an event this weekend to highlight local and regional craftspeople.

The inaugural hutchFEST, a one-day community and artisan celebration, happens this Saturday, Aug. 13 in Midtown Crossing at Turner Park. More than 100 curated vendors from Omaha, Lincoln and around the Midwest gather to showcase modern maker design, quality handmade goods and relevant found objects.

hutchFEST was founded by hutch owners Nick Huff and Brandon Beed. Their store, established June 2013 and now located at nearby 33rd & Farnam, offers new and vintage furniture as well as local artisanal designs.

Over the past three years, the pair has traveled to Kansas City, Denver, Des Moines and Minneapolis, as well as all over Nebraska, in search of top handcrafted and hand-selected goods. hutchFEST intends to connect all of those dots.

“We currently support and sell from over 40 local makers at hutch, and are always looking for other opportunities to support our larger Midwest community of makers,” Huff says. “hutchFEST is our opportunity and continued commitment to finding and providing a marketplace for talented artisans across the Midwest.”

Nominees for the OEAAs are chosen by public vote, which closes Wednesday, Aug 31. Cast your nominations via the OEAA website here.

The nominee reveal party happens from 6-8 p.m. and is free to attend. RSVP here.

Omaha indie pop duo The Hottman Sisters are heading out on tour again to cap the summer.

The band’s three-day jaunt includes dates in Madison and La Crosse, Wisc. and Chicago. The trip is the Hottmans’ third burst this year, following brief runs in California and Minnesota earlier this year, all in the run-up to its debut EP This Two, which dropped July 8.

See tour dates in the flier below:

Tonight, Marah In The Mainsail plays Duffy’s Tavern, 1412 O St. The Minneapolis-based group spins a yarn of rocking, cinematic folk with the vastness of In The Valley Below and the dramatic imagery of Florence & the Machine. Most recently, it released full-length album Thaumatrope in April 2015. The concert previews Marah In The Mainsail’s appearance at this year’s Lincoln Calling, the downtown Capital City festival that happens Oct 6-8. AZP opens tonight’s show. RSVP here.

Across the street, see Zakk Wylde at The Bourbon, 1415 O St, with Tyler Bryant & the Shakedown and Jared James Nichols. The former Ozzy Osbourne guitarist and Black Label Society frontman released his sophomore solo album Book Of Shadows II this past April, two full decades after his first solo effort. In the meantime he’s released 16 albums between his other two projects and cementing himself as one of the foremost metal guitarists. Tickets are $33, RSVP here.

We just added more than 100 events to our statewide calendar. Check them out here. If you do not see your show or one you plan to attend, emails news@hearnebraska.org, or add it yourself using the contribute feature here.