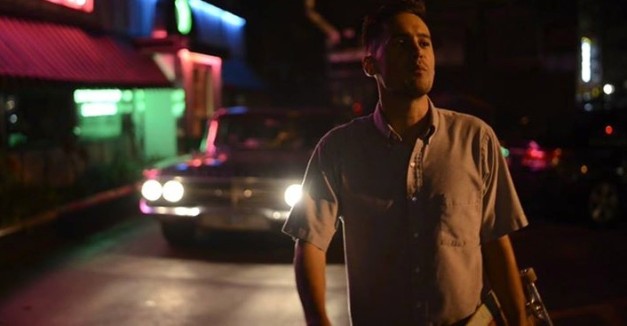 In case you’ve missed it, there are still three more days to catch work by some of the area’s most talented independent filmmakers, curated by Omaha musicians.

Local film buffs will recognize returning directors Nik Fackler and Derek Pressnall, Aaron Gum and Harrison Martin, all of which entered music videos. Fackler nabbed two credits: one for Icky Blossoms’ Craven-esque “In Folds” video with Pressnall and screendance film “Journey to Shiva-Loka.” Gum directed Fink’s “This Is A Part Of Something Greater” video, a nod to Stanley Kubrick and other horror auteurs, while Martin created M34n Str33t’s “Nite Owl.”

After finishing its run at Film Streams, the showcase will head to Iowa City’s Filmscene October 19, Des Moines Social Club in Des Moines October 21 and Kearney’s The World Theater November 6-8.

Nick and Tyler Talbott have returned to Nebraska, and are set to tour the state as a duo next month.

The Talbott Brothers’ state tour starts Nov 14 at Reverb Lounge with special guest Evan Bartels. The pair then head to The Lark in Hastings, The Bieroc in McCook, and a handful of other Greater Nebraska towns, ending in Kearney post-Thanksgiving.

The folk duo just recently made their way home from a northwest tour that took them through southern Idaho and much of Oregon, including up the coast.

Tonight, Brooklyn hip-hop group The Underachievers plays The Waiting Room with Pouya & the Buffet Boys, Kirk Knight and Bodega Bamz. The Underachievers comprises the duo of rappers AK and Issa Gold, and is part of the East Coast collective Beast Coast with Pro Era and Flatbush Zombies. Flying Lotus signed The Underachievers to his Brainfeeder record label in 2012, flying them out to Los Angeles one day after hearing their recordings. They’ve release two mixtapes, an EP and two LPs in the years since, most recently dropping Evermore: The Art of Duality Sept. 25. Tickets are $20, RSVP to the show here.

Over at Duffy’s Tavern, Milwaukee, Wisc., band S.S. Web plays to the tallboy night crowd with Lincoln’s Willy Citro & The Dusters and Warbonnet. The punk/folk trio self-released three albums in the three-year span from 2011 to 2014, and tour behind them relentlessly. Donations are accepted at the door. RSVP here.