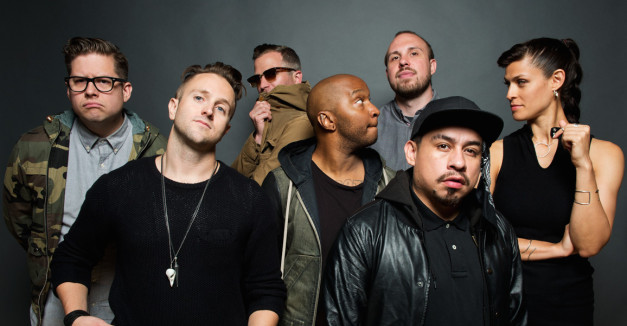 Seven members deep, in a unified and famously DIY hip-hop collective, it’s hard to call any member of Doomtree: “the [adjective] one.”

At different times, emcees P.O.S., Dessa, Cecil Otter, Sims and Mike Mictlan and producers Lazerbeak and Paper Tiger all welcomely take their turn articulating the group’s championship-chasing team dynamic. All know their role, at the same time as they profess to raising each others’ games. Despite solo projects and solo careers, they’re all draped in Doomtree’s intellectual, but blue collar, banner.

So Paper Tiger, a.k.a John Samels, is not “the [adjective] one,” but he’s one of seven, each with her or his own personality. He’s relatively introverted, and works well (at least initially) alone. He’s the only member of the group to leave its Minneapolis homebase, and he lives and works in New York City.

On Doomtree’s third and newest album All Hands, released in January of this year, Paper Tiger’s place can be both the most and least subtle thing on the harder-than-ever new record. His contribution lives in watershed synth lines in the song “Marathon,” that quietly change the trajectory of a song. But along with Lazerbeak and Cecil Otter, Paper Tiger must also make sure the musical foundation of Doomtree can withstand five rappers singing, shouting, chastising, confessing and testifying on top of it.

In the following interview with Paper Tiger, we discuss his instrumental solo material, how Doomtree is represented through graphic design and the summer he spent in a van with no air conditioning.

Hear Nebraska: I was surprised and interested to find out how much of the graphic design work you’d spearheaded for Doomtree over the years. I was curious, because it seems like one of the limitations of doing design for a seven-person group might be analogous to the things you have to get around doing music for a seven-person group. You can’t put seven people’s faces on every single flyer.

Paper Tiger: You’re absolutely right about that. It’s very hard to please everyone. Really, what I’ve done more in the last couple years is quality control, making sure everything is staying on brand and everything is printed correctly.

HN: When you say “staying on brand,” how have you gotten around being able to put seven square photos of everyone on stuff? Symbolism clearly plays into it a lot.

PT: It’s part of the aesthetic we started from the very beginning, kind of gritty and punk rock. We had no money at all, so we were making 200 CDs at Kinko’s for 50 bucks and trying to sell them. We’ve tried to keep that going and the aesthetics kind of follow that.

HN: Did you have a hand in the conceptual creation of the album cover for All Hands?

PT: I actually didn’t. [P.O.S.] headed that one up this time. He had an idea for it. Kind of nautical theme and the idea of the follow up from the last album, how we could continue it … “All hands” could mean a lot of things. Not that the ship is sinking, but that we’re doing this together.

HN: So I saw you guys for the first time when you came down to Omaha for Maha Music Festival this past summer.

HN: You were definitely one of the first acts that kind of woke up the noon-day crowd. I think I was taken aback by the sheer sonic size of what was going on. And I don’t even think, at that time, All Hands had been announced yet. And then here comes a new album that might hit even harder. Is there a specific point in the process where you or Lazerbeak or Cecil [Otter], when he’s contributing to production, where you guys say, “It’s gotta be bigger?”

PT: I think more subconsciously. The way we work on a lot of this stuff is super collaborative, but it’s not really all of use sitting in room together usually. It’s usually I start something or they start something and we trade back and forth. And every time you pass something back and forth, it kind of just gets bigger on its own. There’s more layers and more things going on. Especially on long songs that have a verse for every single member, you can’t just have a four-bar loop going for five months. You have to have a structure that’s interesting.

HN: As you guys have played progressively bigger rooms or fields, have you gotten better at hearing what you think will work or stretch floor to ceiling?

PT: Again, I think it’s subconscious. Because we don’t ever really talk about music that way. 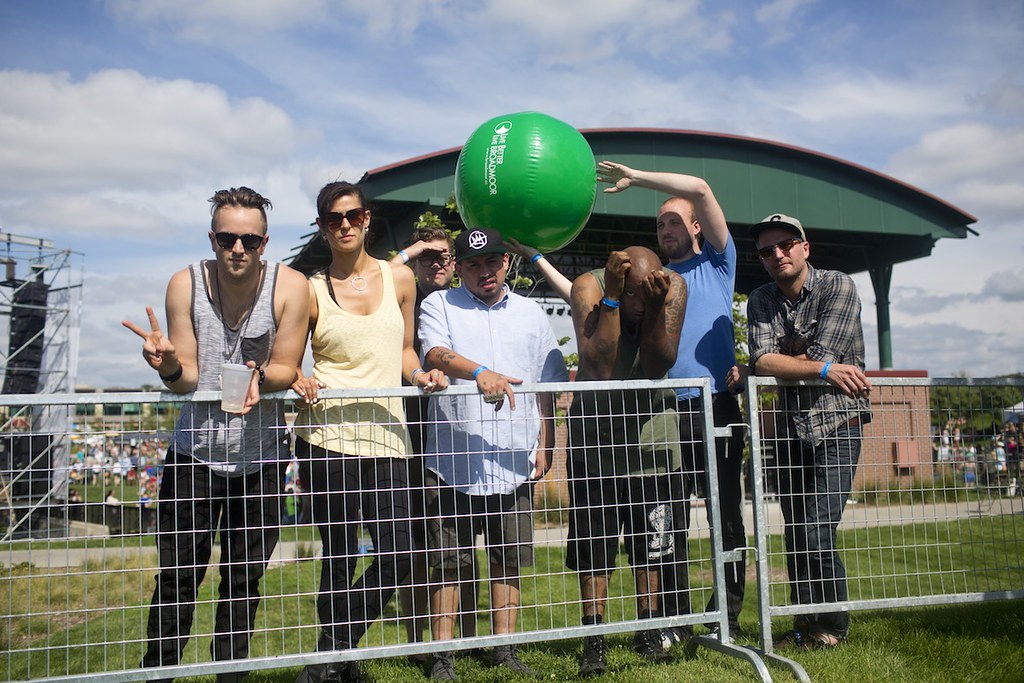 photo of Doomtree at Maha 2014 by Nickolai Hammar

HN: How much of being successful or enjoying your time in Doomtree is finding a small pocket and making the most of it? There’s just not that much real estate with seven people.

PT: There’s definitely competition within the vocalists. Not one-upmanship. But like, “Oh shit, someone brought it up to this level, so I have to be on that level.” I don’t know that much about that side of it. I tried rapping once, and I was terrible, and I’d never ever do it again.

HN: Then, talking strictly about the production side of things for a second … once the record is done, does that sort of exist for you on its own? Because there’s a lot of music subtleties going on there that you’d love on headphones sitting alone somewhere, but would get totally lost in a 200-person room. Is there part of you that looks fondly at little things that happen on the record that exist only there?

PT: Yeah, absolutely. That’s also part of just how we consume music in general. There’s certain things I will gladly want to hear more in a headphone situation where I’m digesting on that level. I’m less concerned with that if I’m going to a show and want to see raucous, big gestures. It kind of balances both.

HN: I was thinking about the last 15 second of “Final Boss,” where there’s this really nice little outro that kind of sounds like a sliding guitar. That’s the sort of thing everyone would miss in a big room. That’s Lazerbeak’s song though. Do you have any little easter eggs like that on the record you like?

PT: I know there’s a bunch. There’s a moment at the end of “Marathon” that I kind of wrote a 32-bar part for it, but it’s pretty mellow. At the end, there’s these big synth notes that come in and change it up a bit. That’s a part  I really enjoy on the record.

HN: And I wonder, kind of touching on the same thing, when I go back and listen to your solo stuff, like Summer EP or Made Like Us, it’s really kind of composed in a layered, but linear, way. Where parts come in and they leave and it definitely goes to a place much different than where it started. I wonder if that’s a certain kind of compartmentalized writing for you, as opposed Doomtree which necessitates coming back to the big hook or the group chorus.

PT: There’s a few different things in play there. A lot of that stuff I used to do was pretty sample-driven, writing off a sound loop or something like that. Which we’re not really doing any more for legal reasons, or because it would change our sound drastically. So much of our newer stuff is more high volume. But also, when I was making some of those, I was very aware they were going to be instrumental. So maybe it started out as a beat for someone to rap on, but then I still had to make sure it was a coherent piece of music without a vocal to carry it from verse to chorus to bridge.

HN: For lack of a more eloquent way to describe it, is that harder? Or more intensive?

PT: I don’t know if “harder” is the right word, but it’s just a different practice. Different thinking. For me, the only thing that’s harder about the process is that it’s harder to call it done … because it’s also my personality to kind of tweak things forever.

HN: Is that part of what makes it work for you to live in New York away from everyone else? Do you work pretty well in that way?

PT: Yeah, it’s worked out surprisingly well, actually. I was concerned about it at first. I’m in Minnesota all the time for meetings and shows, so there’s enough balance for me to feel like I’m part of the group as much as everyone else, but can also do my own thing.

HN: The last thing I was gonna ask you, was I was curious if you could elaborate on a story — someone asked you a one-question interview one time and you mentioned you’d lived for an entire summer in P.O.S.’ van. Was there more to that story?

PT: It was actually my fist real tour. It was one of the hardest tours any of us has ever done. It was me and Sims and P.O.S. We did the Warped Tour the summer of 2007. And we did it in an old, broken van that didn’t have air conditioning and the van was so full of things. It smelled like pee everywhere, and it was hot and we were sun-burned and dirty constantly. It was a boot-camp-type experience. But it was also great being my first experience with extensive touring, because everything else since then has been kind of a piece of cake.