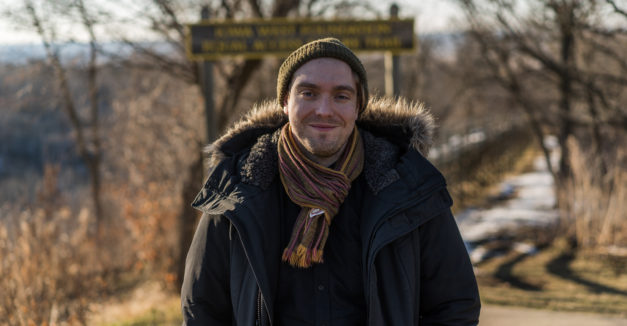 “Tell you somethin’ I don’t think about,” croons Braden Rapp as the irony drips like the melting snow around him. “You Should Know” is replete with detail, the mental imagery so lush and specifically impeding to its narrator — a strong headwind, its prescient forecaster — as to defy the coy defense in its opening line.

So that line, then, feels like the shield between an oppressive gale and Rapp, who performs “You Should Know” deep inside Hitchcock Nature Center for the latest episode of Love Drunk. Whatever the ordeal, its weight is crushing, the devil appearing, as if on his shoulder, in a cocktail tuxedo or a sleazy car salesperson’s haircut. It’d be enough without Rapp’s mid-song admission of ruination, divulging outright what the lilt in his voice betrays.

Rarely do we hear the Omaha musician at such an elemental level. As of late, Rapp’s vocal versatility is on display fronting both Lonely Estates and For1egn Body, one an indie pop outfit and the other a dynamic vehicle for instrumental craft a la Circa Survive. While inherently less grandiose — played solo on an acoustic, after all — the vocal performance and storytelling is as dramatic as anything in Rapp’s repertoire. The ultimate irony is that word of this pain will never reach its catalyst.

Watch Rapp perform “You Should Know” below: