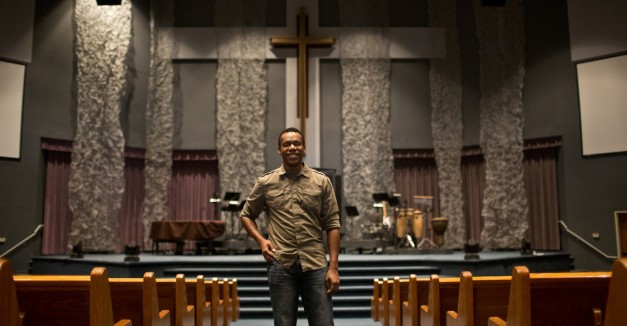 He had to. The church’s largest event, the annual Singing Christmas Tree takes a full year to execute properly. The 41-year tradition of music and theater constitutes almost 400 people with 14 presentations over three weekends. It was unlikely enough that a community newcomer inspired an uptick in enthusiasm and attendance in his first year.

“I felt like there was renewed vision,” Clayton says of the 2014 Singing Christmas Tree event. “There were a lot more young people involved in the music portion.”

Perhaps more unlikely, though, they’re not going to do it in 2015.

Agreeing to step away from the very event that drew him to Grand Island demonstrates the level of community inventiveness and risk-taking Clayton is undertaking, hoping to foster a GI Free Church known for more than one event.

“The church does more than that throughout the year,” Clayton says, listing plans during out June 28 interview for a veterans’ celebration event on July 5, as well as outreach plans for the church to help restore local homes.

Through a pleasantly languid Mississippi accent, Clayton speaks with too much enthusiasm to call it a drawl. Years of vocal training appear naturally when he’s excited. Taking breaths without pause or incident, he rolls through plans to diversify every part of church culture, save its commitment to the gospel. He says that’s what it needs to adapt to the 21st century.

He’s demonstrative from behind his office desk, like the answers to evolving questions about music’s place in church have been locked, loaded and maybe brimming over for years. Marketing, after all, is part and parcel to his job, the “creative” portion of his title implying a desire to retain young churchgoers by fostering a multi-generational atmosphere.

That goal might rear its head most plainly in the music he curates and directs on Grand Island Sundays. Traditional hymns have long ruled the moment, but Clayton expresses admiration, and beyond that, a need, for rock, pop, gospel, latin music and more.

“There are churches all around us closing down because people are not meeting there,” Clayton says, further explaining the need for people not to “make the hymnbook God.”

“Is it because people held fast to traditions?”

His leadership style and cadences are apparent after just a few minutes of opening the floor for Clayton to talk. He will be deeply earnest and philosophical when need be — “the universe is always making music” — but the overriding rhythm is one toward accomplishment. How can he be positive, but also be constructive and direct?

Yes, they’re commands he’d give to an ensemble or his private saxophone students at Yandas Music in town or to the Grand Island Senior High school band, where he’s an assistant instructor.

But they also sound like instructions to a boardroom or a sales team or a room of designers. Roll with it. That’s history of church music, after all. DeAundrae Clayton isn’t the first person to suggest mixing it up.

“It went from Gregorian chants to, then, lyres, to then everything with organ,” he says. “When drums came in, people resisted … you never conquer music.”

He’s gravitated toward young people in the community for a number of reasons, not the least of which is probably that he’s close to their age. Clayton delights in their energetic, expressive playing and their constant closeness to joy when they perform. And in young musicians, Clayton finds perhaps his greatest catalysts for keeping the church’s music community-oriented and changing.

It’s back to the invisible band, as he models what it’s like to musically transform the face, not the message, of a traditional hymn.

Clayton is miming the hi-hat with his tongue against his teeth. He pseudo-conducts with the confidence, the near swagger, of an ex-drum major, lifting his chin on the downbeats as if to squeeze a little extra focus.

“The youth are like, ‘man, what’s this new song?’ Clayton asks feigning their surprise, like a kid hearing The Beatles for the first time and assuming it’s a new band.

“Well,” he pauses, “it’s actually been out quite a while.”