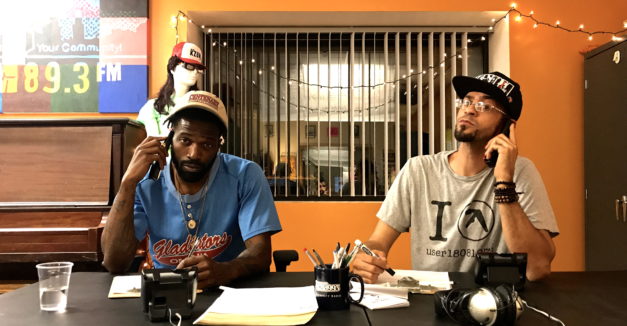 The following script was read live on the KZUM airwaves immediately preceding Xoboi’s performance on Hear Nebraska FM. Audio of the live session and interview with Xoboi and Marcey Yates follows. The Dilla Kids perform this Saturday, Sept. 16 at the New Generation Music Festival; RSVP here.

The Crisis Actors EP, the most recent entry into The Dilla Kids catalogue, opens with a man being arrested for a reason that blatantly seems to make no sense. Before Marcey Yates and Xoboi, tonight’s guest, weekend-cruise through the seven deadly sins, “Pride” pitches its titular indulgence as instead a necessary defense mechanism. In reliable order and style, Xoboi takes the baton from Yates mid-track and carries it effortlessly to the finish.

The Omaha rapper claims influence from kingpins Andre 3000 and Mos Def, and you hear odes to the same soul and groove in the sampling and spots of similar rhythmic-based delivery, both conscious of the song and its needs but protective of his time. Often the second in the Dilla Kids’ one-two punch, Xoboi’s positioning is more a stylistic decision than a hierarchical one. Both bring relaxed, laid-back deliveries that flow with a particular track’s demands, which gives their work a natural feel. But while Yates is a shade more aggressive in leading the way, Xoboi drives his point home with a reasoning, conversational style.

The entire package — smart sampling, comfort within the hip-hop skin — owes some direction to Xoboi’s musical lineage. His grandfather is Cliff Alexis, who is basically the steel drum guru of North America as leader of Northern Illinois’ world-renowned steel drum band and an expert instrument builder. Xo’s father is also a reggae drummer with groups in Minneapolis. Xoboi himself started on drums and trombone, which may hint at why so much brass finds its way into his tracks, and why he chooses features [on tracks by Omaha rapper Mark Patrick and Yates] with deliberate intent.

While Xoboi remains focused on The Dilla Kids, he maintains a style and name all his own, finessing his way through the surface of Omaha’s upper hip-hop crust. He’ll bring it to a wide audience Saturday, opening for Talib Kweli and Rakim at New Generation Music Festival.

You all get a taste of it now. Here’s Xoboi with “BeastMaster.”