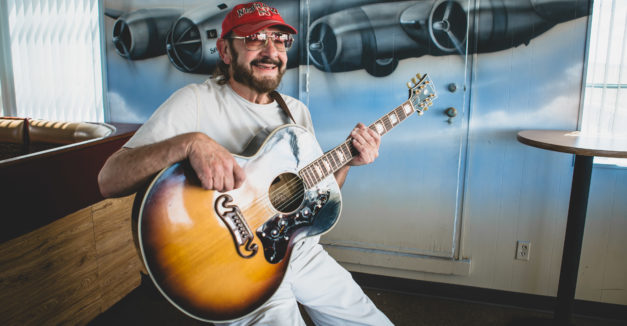 Norfolk songwriter Jim Casey yips out a little howl during the bluesy instrumental breakdown of his live performance of “The Wolf,” and it sounds as though he might fancy himself the solitary scoundrel, at least in spirit. But those days have passed, as we find in the second verse, when Casey’s gravelly voice sings of taxmen coming for his money and the devil for his soul.

Casey wrote that song in 1979, just after he purchased his first home just blocks from Hwy 275 on Norfolk’s south side. He was in the midst of “the pressures of life” as he puts it, with a partner and a newborn son that forced him out of touring life as Jim Casey and the Lightnin’ Band (you can imagine the six-piece ensemble behind him, and not just when he hollers “Play it, boys!”) He says it gave him an altogether new perspective.

“I must have sobered up when I looked at [my son] and thought, ‘Oh my God, what have I done?’” Casey says. “It was gonna be a tough job.”

“The Wolf” is all about the common issues and concerns people deal with when starting a family. Casey lists government, religion, homeownership and one’s relationships with wife and children. The animal now comes for him, though he maintains a bit of roguishness himself, which manifests as his local performances today with longtime band The Smoke Ring. Perhaps music, even fleetingly, allows him back into the pack.

Watch Casey perform “The Wolf” below.