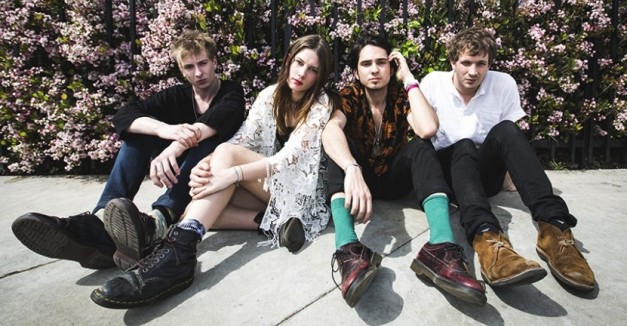 On the first track of their debut album, My Love is Cool, North London natives Wolf Alice sound as if Portishead were asked to record a True Detective theme. Frontwoman Ellie Rowsell’s voice floats high and clear above the ominous and distant percussive drip of her bandmates —  Keep your beady eyes on me / to make sure I don’t turn to dust… — a gymnastic feat portending the shapeshifting to come: Blink, and you’ll come back to a different band.

On other songs, like “Giant Peach,” they recall the bratty pop-punk of statesiders Potty Mouth; “You’re a Germ” goes from 0 to head-banging riffs in about 35 seconds; meanwhile, the bittersweet “Bros” stays abreast of any of the band’s harder materials, all sweetness and longing for a simpler time. The twelve songs (plus a hidden track) of My Love help shake the grunge-literalist-revivalist reputation Wolf Alice gained with their early releases, though the 90s rock influences still ring strong.

It’s possible such a developed and varied portfolio could only be produced by a band both as youthful and experienced as Wolf Alice. They’ve been putting in work for a while, starting in 2010 as a folky duo of Rowsell (then just 18) and guitarist Jeff Oddie, and have since evolved into a quartet that comes armed with lean, sharply intelligent songs that draw from a veritable potpourri of genres, pulling guitar-based rock music into the 21st century.

More than five years into the project though–and a barrage of Grammy, Brit, NME and Mercury Prize nominations–you’ll find a band still taking it day by day. Rowsell, in conversation, speaks softly and has a studied gift for understatement, calling the band’s recent double win (Best Live Band, Best Track) at the NME Awards “a good night out.”

When the band started, “I was just trying things out,” Rowsell says via phone. “I wasn’t 100% sure music was what I wanted to do.” But Wolf Alice has long been operating on what seems like a make-it-or-break-it mentality. Tireless performers, the band converted to career musicians about two years ago.

“[It was] not because we had money, but because it became very full time,” Roswell says. “Taking that much time off work, I probably would have been fired.”

The backup plan to making music? Making music. Asked about a Plan B, Rowsell trails off into more DIY financing options.

“We got to a stage where we were like, we’re probably not going to get signed, so we start thinking about other ways to get money to put out an album, or how we could do it without the budget…. You don’t always need a record label, but we’re lucky.”

Label support aside, moving up into the big leagues comes with its fair share of responsibilities too, including navigating the twin beasts of industry and media — both machines which frequently concern themselves with image over product.

Roswell brushed on the pigeonholing implications during a recent guest spot on Annie Mac’s BBC1 show. “I have had an experience where someone tried to tell me what kind of woman I’m going to be in the music industry. Am I going to be like a Patti Smith, or a Florence and the Machine?” Both idiosyncratic, both powerhouses; neither a Wolf Alice.

“No one ever asks about the lyrics — no one asks me what things mean,” she reflects, and you get the sense she wishes interviews were more often a place to talk shop, rather than what she’s wearing on stage or what touring’s like.

“I was quite nervous [to be on that Annie Mac show],” Rowsell says. “I feel like no matter what you say, in this day and age, people are going to get annoyed about it.”

The nerves go away in her own music, where she channels her strongest voice–where she sings, where she shouts, where she can talk about herself. On examination, the statement My Love is Cool is colored with a twinge of paradox, intimacy with glamour.

The line is a hidden song at the end of the LP, but initially seems plucked from the woozy stoner-rock track “Freazy,” where Wolf Alice’s mission statement is finally let loose:

Who cares if you like them or not? Instead, Wolf Alice — named for a short-story character raised by wolves — is just seeking its own kind, a clarion call the explosive act sends out throughout the disc: on “Bros,” for instance, “Are you wild like me, raised by wolves and other beasts?”; or “Freazy,” “You can join us if you think you’re wild / You’re can join us if you’re a feral child”.

Wolf Alice’s trademark seems to be this unusual marriage of coolness and love, style and substance. “Believe me for my meat and myself,” said Gertrude Stein, and Wolf Alice is prowling in the shadows of the campfire, deeply visceral, deeply physical, uncomfortably laid bare and an undeniable rock act.

Charlotte Murtishaw is a first-time HN contributor. Murtishaw has written for Stereogum, among other publications. Reach her through HN’s managing editor at andrews@hearnebraska.org.