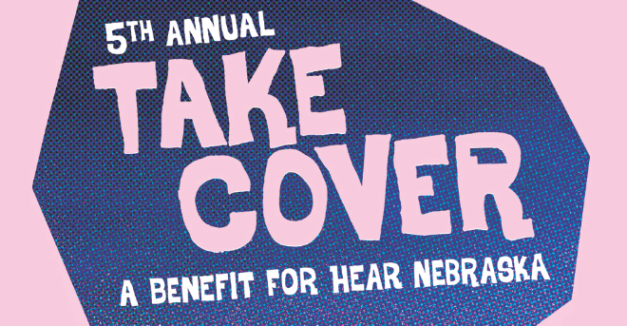 Have you ever wondered what your all-time favorite Nebraska songs would sound like with a little spirited re-imagination? After the fifth-annual Take Cover Lincoln filled Zoo Bar to capacity, we’re ready to take the show to Omaha.

For the uninitiated, Take Cover consists of two shows — last weekend at Lincoln’s The Zoo Bar and this Saturday at Omaha’s O’Leaver’s — comprising 37 total Nebraska acts. Each will reinterpret one song by an influential Nebraska musician, plus perform one original.

But there are a few exciting changes this year. Nebraska comedian Ryan de la Garza will emcee the Omaha show, tossing an added spice into the mix. Nearly all performances are by full bands, where past years comprised mostly solo or stripped down sets. And proceeds help support HN’s paid internships, which we are proud to offer for the first time in 2016.

Take Cover rolls to Omaha this Saturday, Jan. 30, at O’Leaver’s (RSVP here). Read on to find out which songs our group of bands will cover, including contemporaries in A Ferocious Jungle Cat and High Up, classics from Tilly and the Wall and The Faint and a pair of Digital Leather reworkings.

The song we decided to cover is “Agenda Suicide” by The Faint. First of all, we are all big fans of theirs, and we wanted to try something outside of our comfort zone and see if we could do it justice. All of us in the band have pretty diverse musical backgrounds, but we all kind of ended up coming from the same roots more or less. Being a little on the greyer side of life, this song also brings us back to a more youthful era, so to speak.

Plus we also will have a very special guest joining us to perform this song. The legendary Dereck Higgins will be adding some keyboard texture to our interpretation of this song. He has been a huge influence on all of us and to be able to play with him makes this a very special occasion.

We are covering the song “Love Song” by 311. We have selected this song, because it’s in a lot of ways different than the type of music that we play. That’s what makes this ‘Take Cover’ event so much fun, is getting to perform a song of a different genre, from years past. Music of the early 2000‘s was very influential to each member of The Hottman Sisters, and ‘Love Song’ is definitely reminiscent of this time era. It is a heart-wrenching, honest, and somewhat sappy song about a lover, and I mean who doesn’t relate to and love that? Plus, the vocals in the chorus of this song are begging for that sibling harmony, which we can’t resist.

[Editor’s note: though the song is The Cure’s original work, we’ll take it]

“Two Weeks,” by High Up. As soon as I had heard the first few seconds of Fink’s voice I said yep she’s legit. She emanates so much soul and elicits all the feelings I personally want to feel when hearing a soul song. I like challenges as they bring about growth or lessons and am nervously excited for this one in particular. This song drew me in like a moth to a flame. I hope to do it some justice. Since I have recently started my band I have been debating on the types of sounds I want to create. High Up’s music has reminded me of how powerful a soul song can be. I’m grateful for that!

Well Aimed Arrows will be covering the song “Girl’s Name” by Millions of Boys. We’ve had fun playing with them and have seen them perform on many occasions. This was always the song that stood out as our favorite.

We are covering “Young Doctors In Love” by Digital Leather. we choose this song because we feel it means a lot of things to a lot of people. to us it’s a fun, fast, loud, and super fucking catchy tune. and since we’re not big talkers, we hope our rendition brings more music fans to seek out more of Shawn’s and Digital Leather’s music.

The song “Abacus” from Arliss Nancy is one of the sweetest pieces of music I’ve ever heard. I think it is amazing knowing a person from one of my many favorite bands had come from the great state of Nebraska, and took his talent, art and love for music to anther place and get together with some great guy’s and turn it into something beautiful. That’s why I chose to do Abacus, plus Corey said we could.

“Off This” by Eric In Outerspace. We’re huge fans of these guys and we think it’s time to take the next step from band-friends to something a little more serious, you know maybe some sleepovers or cook them some dinner or something.

Anyway, the song is catchy as hell. That hypnotic bassline mixes perfectly with a great vocal melody and blasts into the powerful chorus. It’s super fun to listen to and shout along to, and we’re really excited to give it a shot.

We are covering Tilly and the Wall’s “Tall, Tall Grass.” It was my bassist, Jon Ochsner’s suggestion and I immediately was all, “DUH! I love that song!” I relate directly to the lyrics and “O” is my favorite Tilly album. I didn’t realize they were a Nebraska band for years until some passing conversation between dances late one night in my boyfriend’s kitchen. We also have just the guitarist for that crazy noise part at the end. “When there wasn’t anywhere for me to go, I stumbled into deep love with you rock n’ roll.” I know I’m not alone. I can’t wait to sing along with you.

High Up is covering “Studs In Love” by Digital Leather. Not sure we need to write a paragraph on that!

We’ve chosen “Dites Moi (Song for Françoise Hardy)” by The Subtropics, from their double cassette on Unread Records. Two of us had the honor of contributing guitar/bass to this track. The Subtropics have never performed the song live and Vegetable Deluxe feel it is our duty to share with the affable patrons of O’Leaver’s what should be an international, multi-platinum pop hit.

I chose to do a cover/ remix of A Ferocious Jungle Cat’s “Feed The Vibe” from the band self titled LP. I selected this song because I vibe with it a lot. I love music that touch me and inspires me. It makes a good cover song because its up my alley in terms of jazzy and funky music.I love to sample music. I think it will be a lot of fun to put a hip hop spin on it.

Noah’s Ark Was A Spaceship is the best band in Omaha and has been for a while. We settled on covering “Wrecking Ball Girl” by them mainly for selfish reasons because this distortion-lead song is super fun to play but also because NAWAS has been incredibly generous to all four of us and we wanted to pay tribute to how great those dudes are and the band is as well. What potentially gets lost in the whole song is how great the lyrics are too. It’s nuts how catchy some of the lines are. Should be a fun night and we’re pumped try and do our best Noah’s Ark impression.