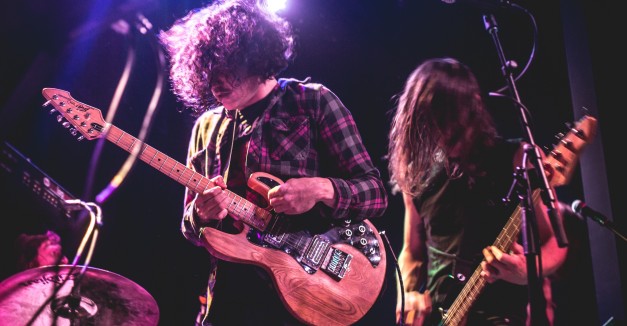 Digital Leather has taken on many a different look since Shawn Foree started what was then a bedroom project in the early 2000s. As Foree says himself, “We’re not AC/DC.”

If there’s a thread to trace back through more than a decade of synth punk, it’s Foree’s self-labeled nihilistic lyrics and deadpan delivery. Digital Leather’s latest LP All Faded (June 23, FDH Records) is flush with examples. “Might as well stay in bed the whole day” sounds less like a manic, paranoid agoraphobic and more like a cold pronouncement of one’s introversion. “I wanna die because I’m useless and I’m stupid,” is treated with the same mundanity and commonality as having just dropped one’s science textbooks in the hallway during passing period.

The difference with this record lies in the solidification of its Omaha-based lineup, which for the past couple of years has included The Faint’s Todd Fink, as well as Johnny Vrendenberg (bass), Ben VanHoolandt (synth) and Jeff Lambelet (drums). Fink produced the record, giving it what Foree calls a “burnt sound.”

Together, they’ve crafted heavier, busier material than the band’s audience has heard to this point. Foree credits VanHoolandt with the added noise element.

“It’s easy to throw some guitar pedals on a table and make random sounds and think you’re a genius,” Foree says. “You have to know what you’re doing with a synth.”

Hear Nebraska: Digital Leather has taken on a much different look since 2012’s Modern Problems, and it seems to start with a heavier synth sound on All Faded. What drove you and the band in that direction?

Shawn Foree: Every Digital Leather album is different. We’re not AC/DC. It would be boring to make the same record over and over. We have been getting heavier, though. I guess we get more badass with age.

HN: On what is probably a related note, the addition of Todd Fink seems to have opened up a few instrumental boundaries. How did his joining the band come about?

SF: Our mutual friend, Donnie, set up a meeting. We didn’t really know each other, but we became friends pretty fast.

HN: As a follow up, you’ve said All Faded is Digital Leather’s noisiest record to date. In what ways do you feel Fink, John and Jeff have helped the band evolve?

SF: Don’t forget about Ben. He’s actually the one adding the noise element in most of the songs. There’s an art to it. You have to know how to use a synthesizer. It’s easy to throw some guitar pedals on a table and make random sounds and think you’re a genius. You have to know what you’re doing with a synth.

HN: Much of the lyricism on All Faded carries a kind of “so-what” attitude towards everything from eschewing the responsibilities of one’s day to wanting to die. It feels kind of like a way to cope with things like that, and I wonder if that’s how you think about it?

SF: Hmm. Not sure what you mean. The lyrics are nihilistic. There’s a theme. It’s not really about coping, though. I don’t feel a need to cope. It’s more fun saying negative stuff. There’s plenty of happy music out there anyway.

HN: You told CMJ earlier this year that you dislike the “tour” moniker for a series of shows. How do you approach a string of tour dates in a way that makes sense, or easier to digest?

SF: Anything less than 10 days is a jaunt. After that, I guess you can call it a tour. Or whatever. That’s just the way I look at it. It’s a tour when you get home and never want to leave your bed again, but then go out that night because you’re still in tour mode.

HN: You seem to have a habit of balancing as many as three or four different projects at once. Last year, you had releases from Digital Leather (the split with the Hussy), TIT, and Diode. What are the benefits of maintaining so many creative outlets? What are the challenges, if any?

SF: It’s good to have a few projects going just to keep you on your feet. Keep you busy. You can spread yourself thin though. There’s a bunch of other projects I’d like to start, but don’t have time or the ambition I guess.

HN: Blackstone Fest is set to be a larger sort of celebration. It’s essentially a block party. Is there anything to playing a larger home-base show that adds extra excitement? Do you approach it any differently? How so, or why not?

SF: It’s always fun to play in front of a mix of people who know our music and those with virgin ears. No matter if we’re in a tiny club playing in front of twenty people or a larger stage in front of few hundred, our show always maintains the same energy level. It’s fun. That’s why we do it.