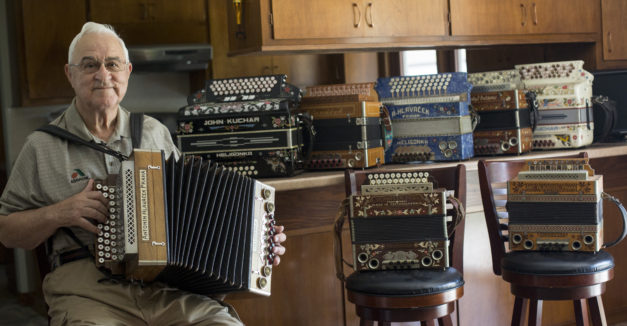 By now, Laddie Bruha has played his button accordion at more than 30 funerals.

In the dining room of his ranch style home in Ord, 80 year-old Bruha recalls the first one.

“It didn’t used to be the thing, to play polka at a funeral,” he says in a heavy Czech accent. “One friend requested when he died, he wanted me to play a couple numbers at his funeral. Of course when I brought the accordion to church people kind of frowned. But I played them, and after that a lot of older people came and said, you know it’s kind of nice, I think I’ll have you play for my funeral.”

And so he did.

Here in Valley County, which, in the late 1800s, was settled largely by Czech Bohemians. But even as the region’s cultural roots fade into the sandhills, celebrated by few, Bruha lives on and the traditional music of his family with him.

He began playing decades ago–as soon as he was old enough to hold the accordion, he says. Learning the instrument was practically his birthright, after all.

Bruha began performing as a teenager and hasn’t stopped. He recalls when polka had been more popular throughout the state, playing annual festivals and weekly gigs in places like Omaha, Grand Island, Lincoln and towns smaller than Ord. For a while, it must have felt like every county had at least one polka hall. It’s even how he met his wife, who has since been his constant companion. They used to dance together every Sunday, when Valley county still had a place for it.

“She always went with us when we played,” he says. “Except for twice. Once it was storming, once she was sick.” 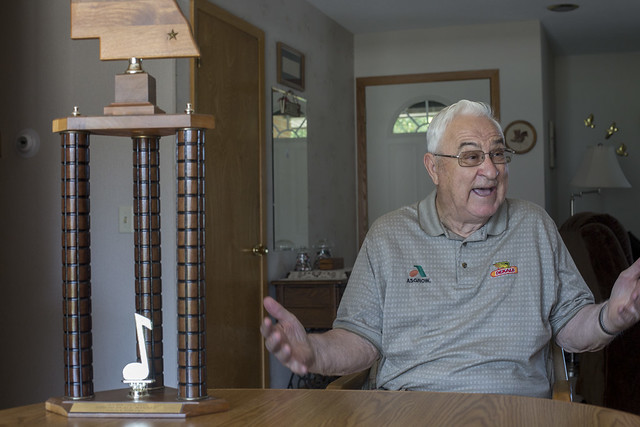 Through the years, he’s amassed an impressive collection of honors and accordions. He and his son were both inducted into the Musicians Hall of Fame* and he’s won a number of statewide and regional competitions for his traditional playing techniques.

As for accordions, he has ten at home and at least five more in storage. Some were hand-made in the Czech Republic, older than he is. Some he came by through family members, others he bought from the family of deceased players. Each instrument is immaculately kept. Pearl buttons are kept free of grime, ornately etched silver plating is polished to a shine.

We ask if he’ll play one for us and his eyes dance with life.

Several weeks ago, Bruha had back surgery. He’s not supposed to lift anything heavier than 15 pounds. His smallest accordion hits the mark on the nose, so that’s the one he plays. 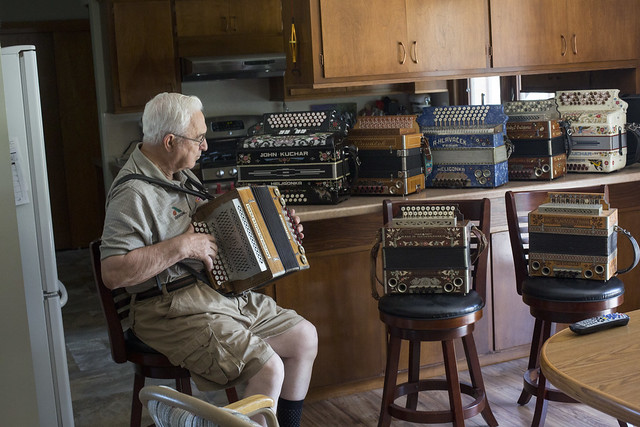 Standing next to his other nine accordions, he plays a lively tune, lovingly drawing out all the texture the accordion can muster. The instrument’s ability to evoke both gaiety and lament at once is perhaps unmatched. In Bruha’s hands, it means a sort of lonely and tender nostalgia. As he plays, he disappears to somewhere else. His eyes stare into the middle distance, oblivious to his surroundings.

Always a learner, Bruha says he has lately been watching Youtube videos of some of the best contemporary Czech players. He’s trying to master the trick of bass runs, where his fingers tap out quarter- and eighth-notes rather than the more traditional technique of holding the bass notes through the melody runs. It’s an ability he greatly admires in the players he watches online.

He tries it out for us and he’s not there yet, but he’s getting close. 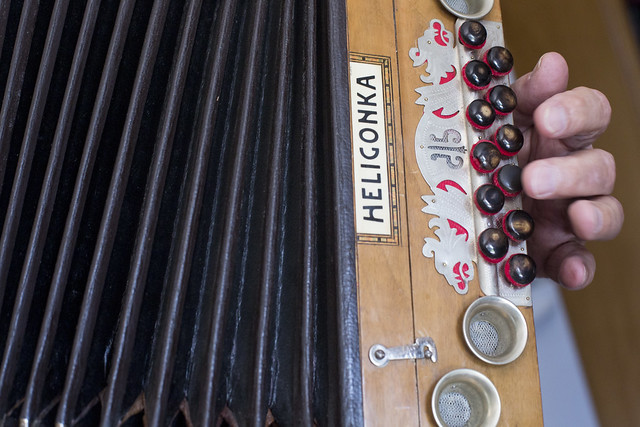 There’s the feeling that each new song or technique Bruha and others like him learn breathes a little more life into the traditional music. And that matters, as the number of funerals he’s invited to play increases.

“It’s very sentimental,” he says of playing funerals. “The first couple times, it was hard. But I’ve redone my state of mind. This is the last thing I could do for that person. That makes me feel good.”

*The Musicians Hall of Fame was created in 1999 to recognize Nebraska musicians for their time and efforts in promoting and preserving Czech heritage.