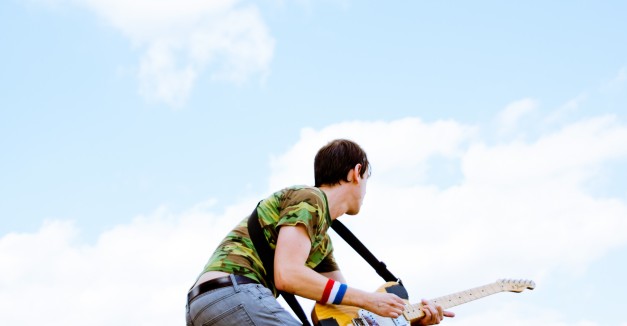 Prior to the final onslaught of The Thermals’ “Hey You,” singer Hutch Harris takes a giant breath, both exaggerated and not.

Exaggerated, because the act of willfully recording a gasp for air means you don’t want the effort going unnoticed. Not, because in the first two-and-a-half minutes the public heard from The Thermals’ new We Disappear, Harris’ voice, as close to soulful as it probably gets, is an unrelenting storm of cold water. He’s gonna need that breath.

In the mission statement for We Disappear, Harris confirmed diving into a tricky lyrical maw of contemporary technology. It’s a record about humans using and misusing the tools of the day toward and against art’s two eternal subject matters: death and love. While in its purest fire it sounds like The Thermals’ are railing against your tweets, there’s some genuine confusion in the record’s 10 songs.

On an album where bassist Kathy Foster and drummer Westin Glass preserve the trio’s near-flawless melodic punk balance, producer Chris Walla (formerly of Death Cab For Cutie) is on hand craftily expanding the band’s range. “Hey You” has more clarity and zip than the depressed lo-fi punk of the band’s 2013 Saddle Creek debut, Desperate Ground. But then there are frayed and hissing intros and outros reminiscent of Death Cab, and when extra distortion joins the fray it’s as a conduit to some fainter emotions.

Our album review podcast, On The Record, reviews The Thermals’ latest below. Catch the band in Omaha on May 6 at Slowdown.

Recent On The Record episodes review McCarthy Trenching, Anna McClellan, The Good Life, Desaparecidos, Digital Leather, Big Harp and more. Listen to all the past episodes below.