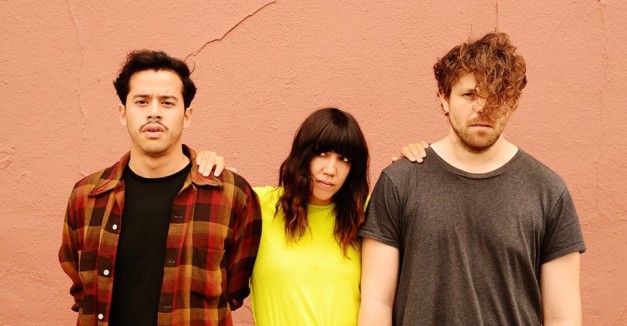 Since the release of 2013’s Chain Letters on Saddle Creek, Big Harp’s endeavors have come in brief jolts, virtually ignoring the climb-and-slope feeling of an album press cycle.

Last year, the duo of Chris Senseney and Stefanie Drootin-Senseney released the German-TV-inspired music video for “Numbers.” Then, a 7-inch on Fat Possum. They recorded what could be material for multiple records without fanfare. They added Daniel Ocanto as a permanent drummer, and then returned to the live stage with a frantic new sound — too withholding to be surf music and too hooky to be outright punk.

And the art reflects the band’s career choices. The album, too, careens as though the Big Harp that gave us two Saddle Creek albums of contemplative and increasingly experimental folk music never existed. Even Chris Senseney’s singing voice is completely devoid of the drawl you assumed was natural enough over the course of 21 studio album songs.

Born out of various sessions with acclaimed Austin producer John Congleton and then former Rilo Kiley bassist Pierre de Reeder, Waveless is defined by its sheer speed, its fuzz pedals and the exhibitionist instrumental prowess enlivening songs that would feel completely reckless in other hands.

Listen to our review here:

Big Harp is on tour now through November. Find those dates here. Stream the album’s new single and listen to past episodes of On The Record below: