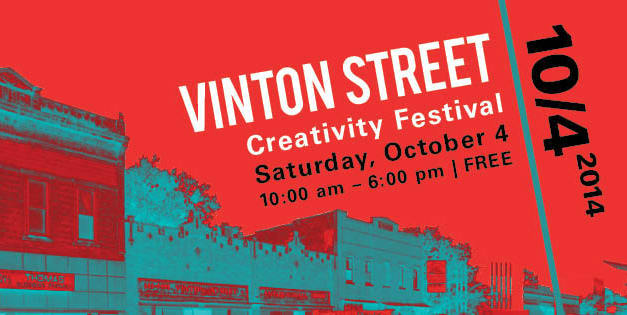 Think of Saturday’s Vinton Street Creativity Festival as the opposite of a stalled town hall meeting.

Instead of an endless rattling of gripes, businesses and community members in South Omaha’s Deer Park neighborhood have convened for the last three years with a constructive solution to the issue of graffiti and tagging in the area. Part and parcel to that mission is combatting incorrect perceptions that it’s an unsafe or unruly neighborhood. The Vinton Street Creativity Festival aims to do it with a free day of art, music and food, from 10 a.m. to 6 p.m. on Saturday. RSVP here.

“What I love and respect about this event,” says Ryan Tewell, creative director at The Apollon, a participating neighborhood company/gallery space, “is that it represents an effort by a community of people to say, ‘Okay, we have this problem. Instead of complaining about it, what can we do to make it better?’ I think our city will always benefit from that kind of solution-oriented approach to solving problems.”

In addition to street art, chalk artists, local food trucks, an educational “playlab” for kids and demonstrations from the Omaha Creative Institute, this year also boasts a ramped-up presence from local musicians. Hear Nebraska is co-sponsoring the day, and M34N STR33t, See Through Dresses, Hector Anchondo and BOTH will perform.

“What I love so much about music as an art form is that it’s often so much more approachable [than visual art],” Tewell says. “Sometimes folks resist coming to our art gallery because they’re ‘not really arts people.’ I doubt anyone has ever used that excuse to skip a M34N STR33T show and what they create is every bit as much art as what we show in the gallery.”

Tewell and The Apollon moved to the Deer Park neighborhood in June 2013, though Tewell says he was around the 2013 festival a month earlier, as he knew The Apollon would be moving in soon. What he observed was something encouraging, given his own artistic convictions.

“I was struck last year, that unlike some other events that are largely about vending and commercial art, this event was trying to keep live art making and building relationships between artists and neighborhood residents central to its mission,” he says.

“That excited us because we believe in the idea of artists becoming active in their communities as agents of social change and we saw a lot of potential for that in this event.”

From 2009 to 2013, The Apollon was a Lincoln-based roaming arts company. The decision to settle in Deer Park, Tewell says, was a response, in part, to the artistic atmosphere at work. Since then, they’ve sometimes faced judgmental or fearful questions about whether the neighborhood was safe or teeming with gang activity, precisely the reason the festival’s reach and influence must extend beyond Saturday’s proceedings.

“I’ve said for some time now that if I can convince you to come to South Omaha I can change your mind about South Omaha,” Tewell says. “That doesn’t work, of course, if you’re not here. Reinvigorating a neighborhood like this one is, in part, about helping people imagine possibilities and encouraging them to be a part of that growth. Had I gotten an invite to the festival in 2012, The Apollon may have moved to the area sooner.”