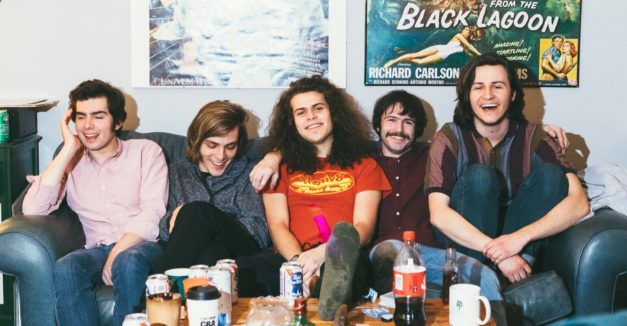 There is an inherent duality surrounding Chicago rock band Modern Vices. On the one hand, the young and active four piece band has made a measurable impact in its hometown. It has been on tour with fellow Windy City natives Twin Peaks, and plays frequently in the Midwestern metropolis.

There’s also a lot that makes the five-piece a Chicago band; it hails from and takes cues from the garages and bars of the scene. Their clever writing and grunge roots sound a bit like like Petty Crimes, The Lemons and other contemporaries from the region. Their guitars are fuzzed out, vocals soaring and drums driving an undeniable garage rock sound.

On the other hand, however, their music twists an old idea into what the band has dubbed “dirty doo-wop.” In their 2014 self-titled debut album, the group put on display their novel take on 1950s pop and ubiquitous garage rock. In tracks like “Smoke Rings” and “Baby,” the band explored the swaying, bluesy and wailing style of familiars like Elvis Presley and The Platters while building on the modern sonic foundation of touring-mates Twin Peaks and other modern rock and roll bands.

In short, it is a fresh take on an idea that, when combined with vocalist Alex Rebek’s clear, powerful, old school baritone, makes so much sense. The two buzzy and ringing guitars from Thomas Peters and Peter Scoville wander and waft around familiar doo-wop chords. The planted bass work from Miles Kalchik and cloudy, splashy drums from Patrick Hennessey seals the band’s dirty-wop charm.

“We’ve played a couple festivals, but this will be one of the biggest ones,” Rebek says of Lincoln Calling, “so that’s really exciting.”

According to Rebek, the post-punk noir on which Modern Vices has built an audience was somewhat of an accident. Although he says he was influenced in his late teens by the great pop and rock and roll singers of the 1950s like Sam Cooke, the “dirty-wop” distinction was originally a joke between the band when their first record dropped, Rebek says. But the label has stuck.

“We want people to feel like we sound a little familiar, but we sound different in a way that they are trying to compare us to something, but they can’t,” Rebek says.

Modern Vices’ budding fan base will soon be treated to another project. Although Rebek played his cards close to the chest as far as how and when their new music will manifest itself, he was certain it was on its way. Rebek laughed at the secrecy, but said mixing is underway and the release goal is early 2017.

He laughs again. “That’s all I can really say right now.”

As they take to an increasingly busy road and recording schedule, The band is looking at new identities and directions to explore as they look towards the future and their newest project. And their place in Chicago has influenced the music they want to make, Rebek says.

“We are just slowly progressing and making music that we feel is unique for Chicago itself,” Rebek says. “We want to intrigue people with interesting sounds. It’s not necessarily going to blow up in Chicago. I mean that’d be cool, but we have a good sense about it all.”

“We’ve been expanding our horizons for the shows we’ve been playing,” Rebek says. “Our newer music is definitely changing and it’s making our set more interesting in a way where we don’t have a set genre.”

Rebek says that while the band will maintain its distinctive, nostalgic threads, it will not shy away from forging a new identity again.

“It’s hard to say what kind of sound we are going for, but we are trying to experiment a little bit. We want to set ourselves apart, make people feel a different way.”