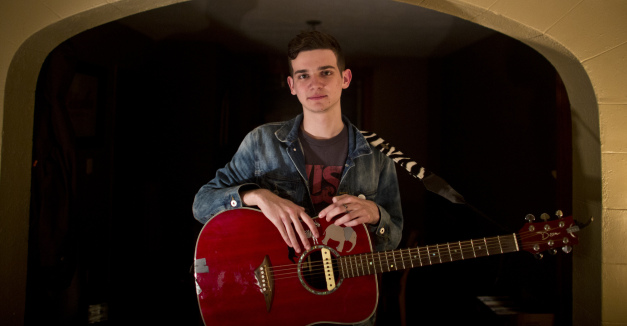 JP Davis’s guitar looks like an early childhood bedroom — a carefully-selected, stimulating color slowly given over to the more brash design tastes of a toddler. In this case, it’s a parade of zoo animal stickers marching around the guitar’s soundhole.

The deliberately waggish choice is visually arresting in the latest Sonata Session, I Forgot to Love My Father’s “I Understand, I Can’t.”

But the animals, like so much else about the track and video, are a perhaps intentionally ironic miscue. There’s no room for whimsy here.

In keeping with tongue-in-cheek choices, there’s the melodramatic band name, pulled straight from the same sensibility that prompted pop-emo bands like Fall Out Boy and Brand New to call early tracks “Reinventing the Wheel to Run Myself Over” and “Okay I Believe You But My Tommy Gun Don’t,” respectively.

And while “I Understand, I Can’t” is indeed driven by melancholy, sentimental power chord progressions, Davis uses his arrangements to put some distance between his song and its emo core.

Likewise, Davis dominates the camera’s frame for the first third of the video, giving the impression of another solo Sonata Session, until the song itself shoulders a full-band and the camera pans to reveal the other four players in the room.

And “I Understand, I Can’t” features Davis wailing intuitive lyrics, the song pushing on its own folk-driven limitations without mismanaging those steps. The spare guitar gives room to a sonorous cello, but the track never erupts into anything too large for the song’s ambitions.

The song shines its light back on solo-Davis before ever bursting into a predictable and lofty chorus sung entirely in vowel sounds.

Check out I Forgot To Love My Father’s new split tape here.