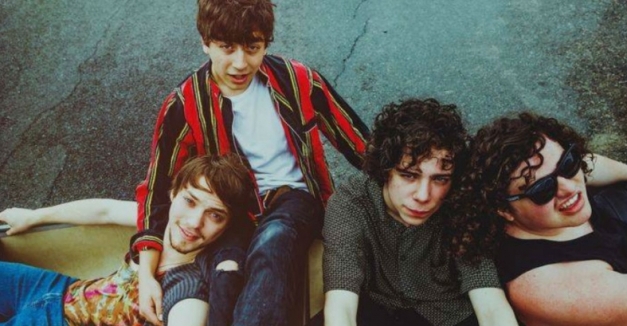 Chicago-based Twin Peaks might see themselves as a group of normal kids, but from the outside, they read more like a group of enterprising rock musicians. The narrative of the band’s rise to notoriety is as familiar as the term “buzzband.”

In the last year, the garage rock quartet has played at South by Southwest (after which they picked up a manager), their hometown Pitchfork Music Festival and, recently, Fun Fun Fun Fest in Austin. Pitchfork has been giving them attention lately, and the group’s second release, August’s Wild Onion, has garnered considerable press.

And every piece (including the one you’re reading) wants to talk about the same thing, at least for a little bit: these guys are young.

To be fair, they are young. Bassist Jack Dolan says that only one of them is 21, the rest are 20. After ditching college on the West Coast for a record deal with Autumn Tone, the four returned to Chicago to live with their parents (a convenient, rent-free home base for anyone trying to make it as a touring musician).

“We just kind of laugh about it,” Dolan says. “Most of the people we hang out with on the road are older. You could say we’re mature, but that might be pushing it.”

Dolan calls The White Album and Exile on Main Street two of the biggest influences for Wild Onion. And those are lofty, if not nebulous, ambitions — kind of first entries into music discovery, early tastemakers for any 15-year-old boy with a guitar and internet access. Arguably, everyone is influenced by those albums.

If those comments come off as naive or dull, though, it might only be misinterpretation. There is, at least according to Dolan, some calculated critical basis for choosing such lofty touchstones.

“[The Beatles and The Rolling Stones] didn’t really hold anything back and they didn’t try to make the whole album sound too much alike,” Dolan says. “We knew the songs [on Wild Onion] were going to sound a lot different from each other.”

So, where Exile on Main Street may be lauded for its deft blend of gospel, country, rock and soul genres, we can also tip our cap to Twin Peaks for acting as that same kind of cultural blender. Add two parts Ty Segall, one part youthful angst, one part coming-of-age recklessness, one part Tame Impala, blend and top off with an unabashed sense of cultural awareness.

Because first, there’s the band name, ripped from a cult-hit David Lynch TV show that was dead-in-the-ground when the band founded in 2010. There’s the Dolan-penned track “Sloop Jay D,” a titular play on Beach Boys’ “Sloop John B.” And a music video for “Flavor” that could double as a Coors commercial for the underaged crowd.

That inclusion of, and reaction to, the culture of which the band is a product and in which it participates, might not be intentional. Strangely, it might just be a by-product.

“Our generation is connected to that sort of thing, in general,” Dolan says. “We don’t try to put that much pop culture into (the music), but we know it’s relevant and that people connect with it.”

Purposefully or not, though, it’s hard not to read Twin Peaks then as an antidote to artists that pretend they’ve been working in a vacuum. Think acoustic-guitar-wielding, folk-playing gentlemen who would never admit to the existence of cell phones or Twitter in a song.

“We’re not trying to portray ourselves as anything we’re not,” Dolan says. “We’re just being normal kids.”

Some normal kids drink Coors Light during the day and smoke joints in crappy vans. Some normal kids worry about a girl thinking they’re “a fucking pussy,” as Dolan writes on “Sloop Jay D.”

Most normal kids are not playing a lineup with White Mystery, Fat White Family and King Tuff, as Twin Peaks did a few days before Dolan and I spoke. Most normal kids did not stay the night at Sonic Ranch, where everyone from Band of Horses to At The Drive-In and Explosions in the Sky has recorded, the night before our interview.

So in a way, sure, Twin Peaks is made of normal kids, but, just like name-dropping Rolling Stones records as big influences, the band might be too ambitious, too hardworking for total normalcy. That is, after all, how they even got onto the fast-paced buzz-band highway in the first place.

“(We’ve) been playing as many shows as we can,” Dolan says. “When the time comes to record, [we’re] really banging it out. We’re the type of dudes who are already thinking about recording the next one. We want to push whatever we’re doing to the best of our ability.”