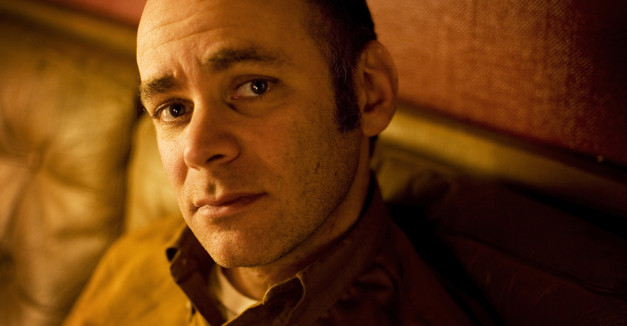 After undertaking three tours based entirely on ribbing and conversing with the crowd, Todd Barry is back on script.

After the last Crowd Work tour, the veteran stand-up is in the midst of short Midwestern run that sees him stopping Omaha tomorrow night at Slowdown for an OK Party Comedy-presented show. Tickets are $18 and are available here.

Often characterized as a comic’s comic, he has historically run in the same New York-centric comedy circles as people like Louis CK and Marc Maron. That feeling of onstage authenticity is no doubt enhanced by his excess of dryly-served observational punchlines.

Outside the stand-up arena, you’d know Barry from his multiple appearances on Louie, his role as Randy the Ram’s manager in The Wrestler and a few others.

We caught Todd Barry on the phone for a brief spell on his way to play Kansas City tonight. Read on as we chat about his current non-club touring mentalities and why seeing faces in the audience is important to him.

Hear Nebraska: In Omaha, you’re at a music venue, but what sort of stages are you doing for the most part on this Midwestern tour?

Todd Barry: Yeah, last night I did a rock club in St. Louis called Firebird that was really good. Tonight, I’m doing the Alamo Drafthouse in Kansas City which is like a movie theater. The shows in Fargo and the Dakotas are all in little theaters, not clubs.

HN: The reason I ask is because I’ve heard you talk about booking outside of comedy clubs to kind of hone the kind of people who might come in. Was that deliberate on this tour?

TB: Yeah, those are the kind of tours I’ve been booking the last few years. I’ll do an occasional club, but I’d rather do one night than six shows for no reason.

HN: That made me think, though, Todd, if you’re in a space where you think people are there to see you, I wonder if you feel like you’re at a point in your career where you know what a Todd Barry show will be like and who you want there, as opposed to doing six nights at a comedy club and trying to win over any and every stranger.

TB: Oh yeah, that is the advantage of doing comedy clubs. You do make new fans. But I feel like I’ve been doing this 26 years now, so at a certain point you just wanna play … as long as people are nice, I’d love to get new fans.

HN: You’ve been characterized for your mellow stage presence, but some of the inflections you hit and accents you hit in your delivery do have a subtle theatrical thing to them, and it reminds of probably why you’re a good voice actor. When you’re working on new material are you thinking, “Here’s where I wanna go low and inflect certain things?”

TB: Occasionally, I will. I’m quiet to begin with, so sometimes I like to whisper a punchline or single out a line in the joke I think helps it out. But I don’t think a lot about how I talk.

HN: Sure, but that’s why I thought the descriptor of you as “deadpan” never worked for me, because there’s a lot of little things going on in what you do. It’s not a flatline.

TB: Yeah, but some people think I’m deadpan. Maybe I am. A good deadpan comic: that works for them, as well.

HN: Because of the perceptible calm to the way you like to perform, was there a time where you felt like calm you wanted to exude on stage lined up with the relaxation you felt inside? I’m thinking about when inexperienced comics try and do something low-key but are obviously nervous, there’s a kind of dissonance that goes on there.

TB: I see more comics forcing high energy than low energy. I still, depending on the situation, will get nervous and be a little more frenetic with my delivery or physicality.

TB: Oh, it’s more if it’s an incredibly big place, opening for someone in a theater. Sometimes TV makes me nervous. Sometimes, if it’s a weird gig like a private party where so many things could go wrong.

HN: When you’re talking about how a big room might put you on edge, on the Crowd Work tours it must have helped to be able to see people’s face and pick up on their mood. Is it weirder for you to be in a big room with people you know are there but whose faces you cannot at all see?

TB: Well, when I do a big theater … when I’ve done shows with Louis [CK] he likes it pitch black, he doesn’t like to see anything. Which is weird and disconnected to me. I ask for the house lights to come up a bit, so I can see.

HN: Is that a different philosophy? Has he ever told you why he likes them off?

TB: I don’t know. I know people in both camps. I just like to see people because when it’s pitch black it’s just scarier to me. It’s good to see people smiling and pick a pocket of people and say, “Alright, I’m at a club right now.”