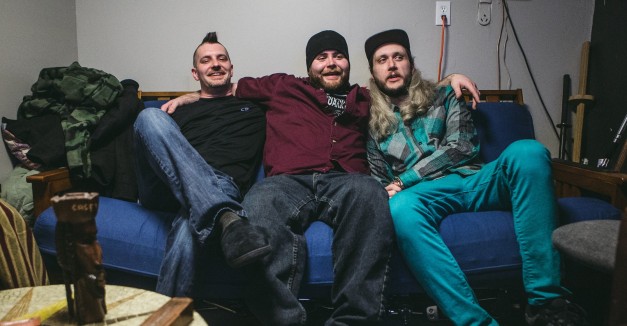 In DIY fashion, the space also serves as the Lincoln jam band’s studio, in which it recorded, mixed and mastered its Dec. 12 release Howl At The Moon. The five-song EP blends aspects of jam rock, blues and funk, unleashing fits of cranky blues guitar from beneath laid-back grooves.

“To The Top,” the track Commander Kilroy performs below for HN Live, maintains the same ethos as the space it inhabits. The rumbling rhythm section of Casey Fink and Andrew Hanna thuds forward as though orchestrating a pre-fight action movie soundtrack before Dylan Fink’s Stratocaster explodes with a hazy wah-wah solo. Casey sings as though he were proclaiming a mission statement of a band on its way to bigger things. It’s a mixed collection of sounds and styles picked up along the way.

Commander Kilroy next performs Feb. 12 at Bodega’s for Lincoln Exposed, and again Feb. 18 at Vega with Garfan and Altura (RSVP here). Watch the trio rehearse “To The Top” in its home practice space: