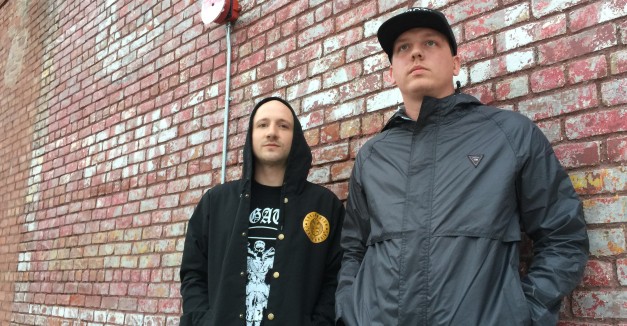 Third Eye Merchants emphatically introduced itself and its brand of tough and gritty hip-hop to the local music scene in December. Since then, and through its partnership with Make Believe Records, the duo has vied for more than just local attention.

That was apparent when I sat down with them Sunday night at Benson’s Aromas Coffeehouse. Jacob Adams, aka Static Soul, and his friend “Downtown” James Brown formed Third Eye Merchants in late 2014 and have been performing and recording since.

“We’re on the ground we’re doing hip-hop music for what it represents, which is a culture and gathering people together who believe in the same ideals,” says Adams during a recent Sunday night at Aromas Coffeehouse in Benson.

Adams, originally from Lincoln, moved to Omaha four years ago to be part of the bigger city’s music scene. Now, he and Downtown James Brown, an Omaha native, are becoming local hip-hop regulars. On Dec. 1, they released their debut EP, Visions, recorded at Make Believe Studios in midtown Omaha.

Their sound is gritty and tough accompanied by lyrics and delivery reminiscent of artists like Atmosphere. At their sharpest, Adams’s rhymes can be ominous, truthful and motivating: “You can never be old and wise if you never roll the dice,” he rhymes on “Who Can You Trust.”

The duo recorded Visions in January 2015, the release of which was a dream come true. They’ve both been big fans of the hip-hop since they were kids. Brown harkens back to when he was 11 or 12 and heard Gang Starr’s “Moment of Truth” on a Dave Mirra BMX video game.

“I got really interested in it and was interested in hearing where the samples came from. And I’ve been in love with it (hip-hop) ever since,” Brown said.

Adams can also trace his hip-hop roots back to the 1990s. His mother listened to TLC’s CrazySexyCool — which featured the pop hit “Creep” — and he was inspired.

“I was so intrigued by it,” Adams says. “I thought it was more wild than anything I’ve ever heard.”

Though Third Eye Merchants positions itself far from the erstwhile trio on the hip-hop spectrum, Adams’s early introduction left him inspired. Now, he’s is expressing himself through his more aggressive version of hip-hop. Active since the mid-2000s, he delivers his lyrics quickly with deep, looming messages.

“I want them to make you mad. Because the world isn’t really right now. I want to inspire you to … just to do something,” Adams says.

Brown has been mixing beats for about five years and on Visions, he includes quite a bit of old school jazz and soul, and some more beats from more modern-day artists.

Their unique style and sound formed organically, the two say. They began hanging out about four years ago, having met through some Make Believe Studios connections, namely producer Keith Rodger.

Brown and Adams wrote a song together for fun in late 2014 and thought it’d make sense to create an official duo and start making music. Eventually, Make Believe Records offered to help them record their music.

“I was very proud to see our hard work manifest. That was my first release as a hip-hop artist,” Adams says.

Brown is happy to see that the group is getting coverage through blog posts in places like New York and Chicago. He said that he wasn’t so concerned about the EP getting noticed here, but he wanted to get it noticed in the “underground market.” They have been resourceful about using the Internet to distribute their music through SoundCloud and YouTube, where their video for “Red Death” lives.

With help from Make Believe New Media, the duo shot in a day the VHS-style, double-vision video in the basement of Brown’s former apartment, an old environment that was well-suited for the eerie-sounding music. Local hip-hop artist Articulate’s rough and tough vocals and DJ Really Real’s scratches add their special touches to the video and song as well.

Third Eye Merchants, continues to write new music while juggling day jobs. They are also working on getting a couple tour dates set for the late summer/fall. Eventually, they say they’d like to tour Europe.

Adams wants to take a simple and effective approach to his group’s art.

Mark Hayden is a Hear Nebraska contributor. Reach him through HN’s managing editor at andrews@hearnebraska.org.