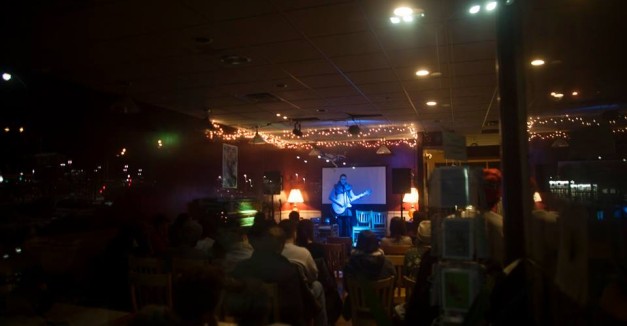 We take a look at some of the recurring musical events around Lincoln and Omaha. Mark your calendars and hit up these great live shows, showcases and dancing lessons.

Cover: $5 for the class, open dancing is free

A staple in House of Loom’s schedule since its opening in 2011, Salsa Sundays gives people the opportunity to learn new styles of dance no matter their skill level. Beginners can take the class earlier in the evening before joining the others on the dance floor.

Blandon Joiner, dance instructor, says both regulars and new attendees alike can enjoy Salsa Sundays without a partner. He says the class is fun and hands-on, but people stay to dance all night to his salsa music picks.

“We sometimes have people dancing all the way till it’s done at 2 in the morning,” Joiner says.

Aspiring singers and musicians test out their talent at Crescent Moon Coffee Thursday evenings during a 3-song open mic. On the first Thursday of the month, a specific artist is featured and opens up the show with a longer set.

“We try to give everybody a chance if we can,” says Mark Lowe, the event’s organizer. He says the open mic features a slew of regulars, but artists from as far away as Kansas City have headlined the event.

Songwriter Sundays started in January but have already become a popular mainstay for the quiet coffee shop, partly thanks to the help of Lincoln’s musicians.

For its March 1 show with I Forgot to Love My Father, blet launched a mini social media outcry to “sell out the ‘Lark” and was successful — the coffee shop reached capacity.

“It’s been successful so far,” says organizer Will Hutchinson. “I originally planned to just have a show whenever we had the opportunity, but we’ve been able to get a show going every single week.”

For nearly a decade, Jazzocracy has made its home on Zoo Bar’s stage. The five-piece jazz band has a solid lineup, but sometimes plays with

“The Zoo has this atmosphere of being a really good place to do jams,” trombonist Tommy Van Den Berg says. “[The original lineup] started playing and it became a regular thing.”

Trombonist Tommy Van Den Berg says the band mostly plays covers — he mentions Miles Davis and John Coltrane — but has played originals in the past.

“It’s the one place we get to do our thing and improvise,” says Van Den Berg.