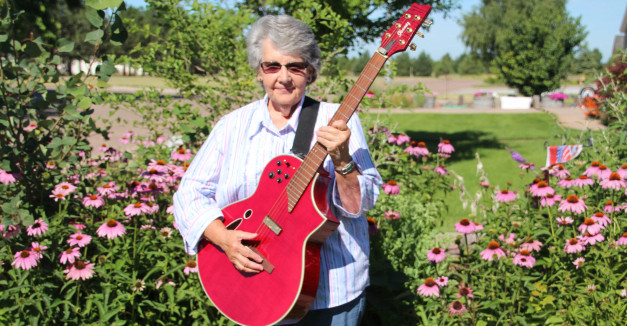 Ask former Chase County Grade School science teacher Marla Smith for a favorite memory from the grade-school science camp she co-founded 26 years ago — or her much longer run as a music teacher — and there are simply too many to rank.

Instead, she looks to one powerful, overarching image that drives it all home.

“It’s that glow in their eye that says, ‘This is the best day ever and I never want it to end,’” Smith says. “That’s how you know it’s made an impact on them.”

Sitting in a booth in the Sweden Cream soft-serve, fast-food restaurant on Imperial’s main street (appropriately named Broadway) her familiarity with each passerby is near constant. She asks about progress with an instrument or a kid’s studies or carries a conversation with their parents.

In large part, this is due to her relevance and impact on the community. Not only has she taught science for four decades in the town of a little more than 2,000 — and innovated in the process — she has instructed music for even longer.

Smith, 66, grew up on a farm just outside of town in a house full of musicians who played by ear. Her father played banjo, drums and mandolin. Her mother played piano, and her brother played saxophone. Though she was a multi-instrumentalist herself, her first love was accordion.

“I went to a lot of contests,” she says. “Accordion was the instrument back then.”

Music was always a community endeavor for her, an experience to be shared among friends and loved ones. As a family band, the Smiths performed at everything from PTA events to talent shows to dances. It’s what replaced sitting in front of the tube.

“We didn’t watch TV that much,” she says. “After we had supper, we’d just sit down and play music.”

Smith gave her first guitar lessons while earning her undergraduate degree at Chadron State College. She describes them as casual; she knew how to play the guitar, and thought she could at least communicate the basics to someone willing to try. She began teaching science and giving formal, private music lessons soon after graduating in 1971.

In 1989, she co-founded S.C.O.R.E. science camp with fellow teacher Sue Renken. That same year, Smith, Renken and others established the Imperial Grade School Foundation as a platform to launch projects that benefitted students. S.C.O.R.E. was its inaugural program.

“She was really good at getting the community behind her,” says Shelley Clark, former Chase County High School teacher and fellow S.C.O.R.E volunteer. “She [brought out] a lot of dedicated people.”

Smith says many students who go through the camp return as middle and high school volunteers. The additional help ensures that S.C.O.R.E. is financially operable, but to Smith, it also says something about what the experience of camp instills in its alumni.

“It’s just very rewarding to see the kind of character that they have developed and how they’ve grown as young people and are willing to not only give back to the S.C.O.R.E. program but to the community as a whole,” Smith says.

There’s an ebb and flow to Smith’s schedule — S.C.O.R.E. runs every other year — and the off years give her more time for private lessons. She teaches all sorts of instruments, depending on what students want to learn: beginning keyboard, accordion, guitar, bass, some ukulele (she describes it as a fad) and mandolin.

More students means more opportunities for her budding musicians to learn to play together. Twice a month, she hosts what she calls “guitar jams,” and when S.C.O.R.E. isn’t running, she’ll prepare a recital with her students. The latter, she says, not only urges them to be well practiced, but provides valuable experience.

“When you get up in front of an audience and if you’re playing a solo, it’s nerve-wracking,” Smith says. “But the more they do it, the easier it gets for them, and that can carry over to a job interview or to performing on stage.”

On occasion before her retirement, she used to mix her passions, bringing her guitar to school. She would use it to teach the concept of sound, or to sing songs that related to the topic of the day. A personal favorite of hers, John Denver’s Earth-conscious music, often made the rotation.

“The crazy thing was they didn’t run me out of the classroom,” she says of her students. “Whether they admitted it or not, I think they enjoyed it.”

“[She has had a] huge impact on the educational growth of students over the years,” says Clark of her former colleague. “[She’s] talented, caring. All the qualities you want in a teacher.”

As Smith reflects on her teaching career, she seems pleased to simply be sharing what drives her, whether science or music.

“If you can share what you know and what you like, it inspires [others] to develop their talent and abilities as well,” she says, “and that’s very gratifying.”