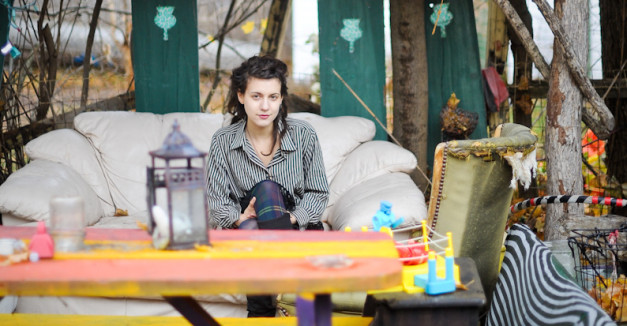 It’s not so difficult to nab a stylistic takeaway from Hana Zara’s third album The North. It’s spun throughout with doleful and narrative folk, made touching by its singer’s fervent voice.

But the more unshakable characteristic of the ten songs is a kind of simmering, hard to pick out in the music, but undeniably born in the experience of listening to Zara’s often-five-plus-minute folks songs in a row. With lyrics like portraitures, the repetition, the subtle variations in Zara’s verses, catch up with up with slow dance of the melodies. And somewhere in the middle of so many of the songs, Zara lays a hint more exertion on her neighing vocals, full of teetering vibrato. The result is a pressurization.

And it’s a fitting feeling to accomany the push-and-pull ideas the album comes to posit about hometowns, old friends and venturing lonely, vast terrain. Though the acoustic instrumentation is typically spare, The North is an album of great vision.

Zara, also known as Hana Kornbluh, in a Nebraska native who returned to Lincoln in late 2014, after a few years of living in New York, Vermont and Spain. However biographical or not, the album certainly lets on the dreams, confessions and preoccupations of a traveling soul drawn back toward home.

“Did the magnets of this city pull the iron in our blood?” Zara asks in the album’s opening track, the minor and restless “Day of the Dead.”

Listen to The North below. It’s been out digitally since March.