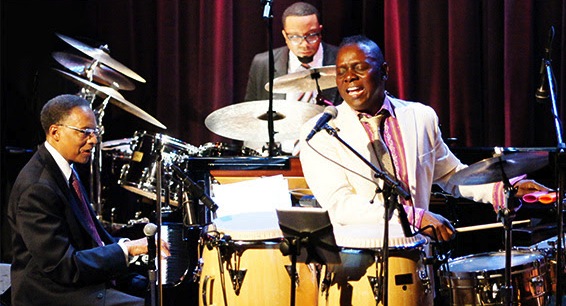 The soul-pop behemoth Earth, Wind & Fire has paid Philip Bailey’s bills for 45 years. Best known for a string of hits in the 1970s and early ‘80s, like “September,” “Shining Star” and “Boogie Wonderland,” the ensemble’s combined past and present roster is the size of a couple baseball teams.

And when I called Bailey at his Los Angeles home last month, the lead vocalist and drummer is trying to remember if he’s coming to Nebraska in October for one of Earth, Wind & Fire’s many “corporate gigs.” He’s thinking of Springfield, Missouri, but the lingering point is understood: Earth, Wind & Fire is something of a machine.

Now, had it been the focus of the interview, Bailey would have undoubtedly offered, as he has many times, that Earth, Wind & Fire accomplished something new and sustaining in pop music and for Black musicians.

But today, that band is the day job, the self-propelling sure thing. And it’s allowed the striking vocalist a four-decade solo career that’s taken his skying falsetto into rock, gospel and, most importantly, jazz.

“With jazz, I just dive in,” Bailey says over the phone in a somewhat deep and breathy speaking voice. “It’s exploratory. I don’t necessarily have to depend on it to make a living because of the nature of my career. Earth, Wind & Fire has given me the opportunity to do [jazz] from a pure place and for the love of it.”

Among the artistic opportunities afforded to Bailey by his long-term success is his relationship to famed Chicago jazz pianist and bandleader Ramsey Lewis. Their old friendship has seen them performing together all over the United States the last two years, and as far away as Japan, South Korea and Bahrain.

With both artists on their own global touring schedules, the Omaha performance is essentially a one-off show, an opportunity that pops up on their calendars a few times a year. The nights showcase Lewis’ Grammy-winning compositions on piano and keyboard, reprise the odd Earth, Wind & Fire hit and reliably highlight “Sun Goddess,” the jubilant eight-minute jam that initially brought Lewis and Bailey together in 1974. At that time, their connection was Earth, Wind & Fire co-leader Maurice White, who departed the Ramsey Lewis Trio to form the titanic pop act in 1969.

In 20 minutes, Bailey calls his relationship with Lewis “a treat” five times.

“As a vocalist, piano is the ultimate accompaniment,” Bailey says. “It is the hand-in-glove instrument for you. If you have a great pianist, you don’t have to do a whole lot of stuff.”

By “do a whole lot,” Bailey might mean the flourishes and quick vertical movements of his distinct, four-octave range, the one that famously rings out in “September” and the choruses of most Earth, Wind & Fire mainstays. In 1984, Bailey lent it to the care of Phil Collins, who produced Bailey’s second solo album, Chinese Wall. That album, in a discography of ten pop, world music and gospel outings, yielded one smash hit, “Easy Lover,” and an array of odd, globe-trotting electro-pop and rock. Bailey’s falsetto, while persistently peaking higher than seems possible, exotically mews in the album’s horn-popping title track and projects a fragile mortality in the haunting record-closer “Children of the Ghetto.”

“If I was going to do a solo project,” Bailey describes his thinking at the time, “I wanted to do something that was different and challenging, and Phil was able to really help make that happen in a major way.”

As for the voice, caring for his peerless musical gift takes some diligence at age 64.

“The first question you asked me — this morning, where am I, I’m at the gym,” Bailey says, referring to the opening of the call. “Taking care of myself is part and parcel to maintaining the instrument. There’s a personal awareness to be proactive.”

It’s an idea of self-preservation highlighted when Bailey shares the stage with the 80-year-old Ramsey Lewis. Bailey remembers a 22-year-old version of himself at Lewis’ home cookouts and alley-way basketball games when Earth, Wind & Fire would visit Chicago.

“He’s a very genuine and gentle man,” Bailey says of Lewis, who is nearing 80 albums in his still-expanding discography.

But Bailey’s attachment to Lewis also stems from a deep-seated love of jazz lore. The vocalist has long called the genre his first musical love, and grew up idolizing the likes of Miles Davis and John Coltrane.

All the way back to the early ‘70s cookouts, Bailey would ask Lewis for stories about the jazz greats of the past generation, digging for brushes with Louis Armstrong, Ornette Coleman and Coltrane.

“In those days?” Bailey asks rhetorically, “I pick his brain now! It’s a beautiful thing. A lot of stuff that we want to know, he’s forgot about already.”