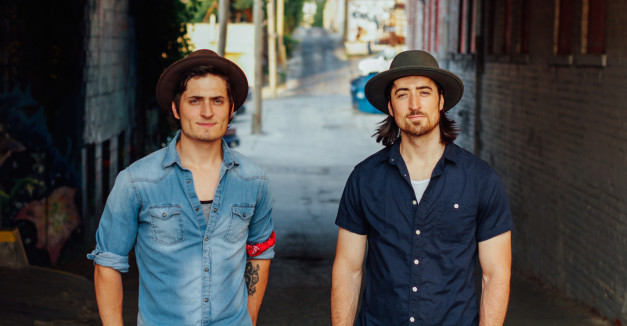 There’s nothing odd about the image in and of itself: a musically gifted teengar teaching himself the instrument and learning covers, maybe 3 Doors Down in this case, Tyler remembers.

It was the configuration of the bedroom that made the difference. Performance ready, it was organized like a stage to the outside world, Nick singing into a microphone for no one.

The day they added a second prop microphone for Tyler, who’d been singing in his school choir, meant a lot, in retrospect. The literal door opened for the Talbott brothers to become The Talbott Brothers.

Ten years later, the brothers have toured to both coasts with three record releases to their surname. A second tour to the Pacific Northwest is slated for the fall. The Talbott Brothers play the Imperial stop of the Good Living Tour on Friday, July 17 with Omaha’s See Through Dresses and Lincoln’s The Bottle Tops.

“I’d like to say we were the best of buds [before music],” Tyler says, “but we didn’t connect on any sort of level.”

Two years apart in the southwestern Nebraska town of Imperial, the brothers were always proxemically close; there was no other way at the K-12 Chase County School. There were sports, of course, and bike rides on Imperial’s expansive, flat streets, but it was the collaborative nature of music that mostly put a pin in the competitive side of their relationship.

“I think [music] was the one thing we felt we didn’t have to battle each other on all the time,” Nick says. “It was more something we could do together to go out onto the battlefield.”

Since then, the brothers have had ample time to test the galvanizing power of their musical partnership and take a professional approach. In 2013, Tyler told Hear Nebraska their East Coast tour had proven cold, lonely and challenging. Together, they’re managing the band’s finances. Even out of their new homebase in Omaha, the brothers are constantly tackling the well-paying, but time-intensive gigs at Central Nebraska bars and vineyards.

“We call it work whenever we’re working on music,” Tyler says. “There’s no clock-in and clock-out, but we know when we’re gonna be working on something all day. It starts to look like a business.”

They say that attitude stems from a combination of workmanlike ethos inherent to small town life, but also a work-as-play stimulation that came from a quiet youth. Hacking away for hours on the guitar as kids is akin to their building dirt bike tracks or making up elaborate imaginary games.

“I think everyone who comes from a small town has a little bit of pent-up feeling,” Tyler says.

Working those feelings out was part of the draw of songwriting, expressions of anxiety and ambition and drive that dot the Talbotts’ work all the way up to their new debut full-length, Places. Released digitally in June and physically on July 9, the record finds the brothers forging through classic and country rock with earnest introspectiveness. Whatever “making it” in the music world looks like, Places comes from a place of questioning.

“How are we going to remain a band? How do you remain an artist that stays true to what you want to do?” Nick frames as the record’s central questions.

Even through tireless tour booking, making inquiries about LLC status and going to the bank together, the occasional sibling contest will subconsciously rear its head — two sets of instinct wrestling to play quarterback, leading man, bandleader, even if by complete accident.

“There’s still times where we’ll be rehearsing,” Tyler laughs, “and I’ll be playing electric [guitar] and Nick will play electric and all of a sudden we’re both playing a lead part.”

Then, they have to stop. But the deciding question is a mature one, not about who’s playing with the superior virtuosity or speed or flashiness.

“What’s better for the song?”