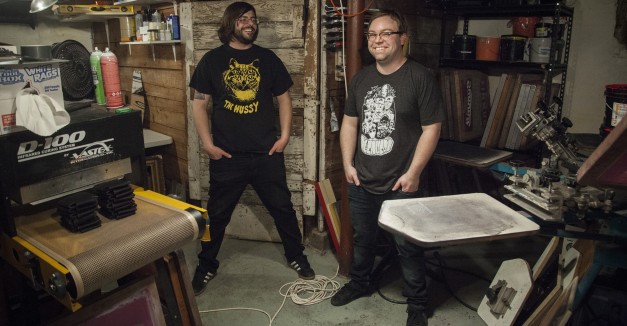 Rainy Road Record celebrates its sixth birthday Saturday at O’Leaver’s with performances by Worried Mothers, Kool 100s and It Really Is. Discounted tapes, LPs, shirts and koozies will be on sale. The 9:30 p.m. show is $5. RSVP here.

In the digital age, with access to most any single song at listeners’ fingertips, there remains a DIY old-guard committed to preserving physical methods. Kevin Cline and Ben Allen are two of them.

The pair of Omaha residents established Rainy Road Records in March 2010 as a way to help friends in bands looking for promotion. In the six years since, the tape label has released 26 total cassettes, defining itself by a lo-fi, trashy punk and garage rock sound. Label artists include band slike Brimstone Howl, Snake Island!, Touch People, Kansas City, Mo., band Kool 100s and others across the nation.

Though they’ve eschewed hand-dubbing tapes in their basement — an all-night affair — Cline and Allen still screen print covers, tapes and posters for professionally duplicated small-batch runs. Especially within their niche, they say there’s something special about the raw, dirty quality of a tape.

“Listening to a whole album from front to back definitely has a better effect than listening to a playlist,” Cline says.

We visited Cline and Allen at their Omaha workspace, affectionately called “DIY House,” to talk about their first recordings, dubbing tapes in the basement by hand and the allure of physical media.