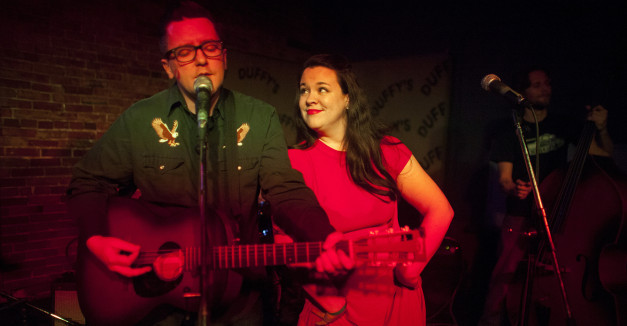 Listening to the song, which will be released first on our Hear Nebraska Vol. 3 compilation and later on The Bottle Tops forthcoming sophomore full-length, that imagery sticks. The snare-heavy percussion churns like rail wheels and the stand-up bass pumps steam from an old engine’s smoke stack. A guitar solo freewheels through the song’s middle third under a wide open night sky.

“The Farmer’s Hill” is one of ten tracks from a diverse array of Nebraska musicians on our compilation, which will be released on mixed-color vinyl later this month.

Semrad calls that speeding-train energy perfect for the song’s subject matter, about young, frustrated teens lighting a massive fire in a country field.

“That is what the song is about: a time in my life that was unstable, unsure, and rebellious,” he says via email. “There was a lot of vandalism, drinking, and many nights of nowhere. Spending my teen years growing up in western Nebraska, there was no real direction for the lot of us. And, most of the time, this predicament got you either in trouble with the law or, worse, back at square one. We all were trying to find our ticket out.”

He says “The Farmer’s Hill” previews new Bottle Tops material as a representation of the band’s willingness to experiment. For one, the band recorded the song practically backwards from how they usually would — laying down guitar tracks first and the track’s rhythmic foundation later.

“I have to say we’ve come a long way as a collective group of music makers,” Semrad says. “I am taking more risks with my songwriting, especially while writing my solo record in tandem.”

The Bottle Tops will play our Lincoln compilation release show on April 17 at The Zoo Bar with Jake Bellows and Universe Contest (RSVP). On April 18, Bellows, Both and Ladyfinger will play a release show at The Waiting Room (RSVP).

Listen to “The Farmer’s Hill” for the first time here: