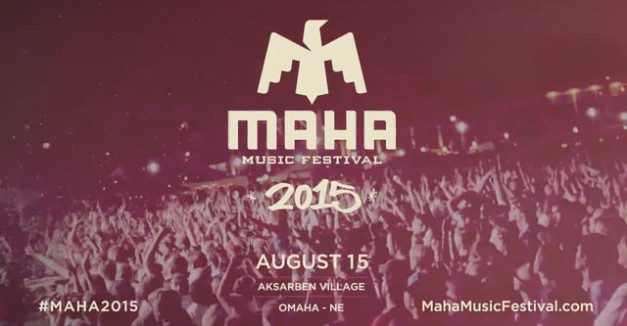 [Editor’s note: Hear Nebraska is a media sponsor of the 2015 Maha Music Festival, as well as a participant in the community village]

In every measurable way, Maha Music Festival has grown each year since debuting in 2009. From bigger-name touring acts to fast-rising local bands to its burgeoning community village, the festival has staked a claim as the most vital music event in the state, and embedded itself into Omaha’s larger cultural fabric.

Attendance has jumped each year, growing at a fast pace since moving into its current home in Aksarben Village. The biggest leap came in 2014, where it jumped from 5,300 in 2013 to more than 7,000. Organizers have already confirmed that this year’s turnout will trump it’s existing record as it approaches a sell-out.

“If Maha did not sell another ticket, it would still have greater attendance than last year,” co-found Tre Brashear posted this week via Facebook. “Consider this a friendly warning if you are a ticket buying procrastinator.”

If fear of missing out isn’t enough of a draw, peruse the tastefully curated lineup of local and touring acts. This year is heavy on the indie and garage rock aesthetic, with bands like Ex Hex, Alvvays, Wavves and Speedy Ortiz beefing up the heart of the order.

And that’s to say nothing of the dream headliner. Maha organizers crowdsourced fans after last year’s festival to find the next headliner, and Modest Mouse was an overwhelming candidate. Thus, many festivalgoers may feel ownership of the veteran indie band’s appearance after cries for their inclusion. The anticipation built by their confirmation promises to burst once the band, fresh off of its first record release in eight years, hits the stage. In that way, Modest Mouse is similar to last year’s headliner, Death Cab for Cutie, as a solid, can’t-miss indie rock attraction.

The local selections might provide the most sonic diversity. There’s hip-hop duo Both, which tops the festival at noon. Freakabout will follow as possibly the hardest rocking band on the entire lineup. All Young Girls Are Machine Guns should add a desireable soulful flavor to the midday slot.

Examine the list closely enough, and Maha breaks the festival mold in other socially important ways. Earlier this year, Pixable ran a series of .gifs in which major festival posters were shown twice: once with all of their acts and again with the all-male acts photoshopped out. The results are perhaps not shocking, but certainly unsettling, given the barrenness of the photos post-edit. Apply the same exercise to Maha, and only one-third of the bands disappear. Not only do its organizers curate genre diversity, but also gender inclusivity.

That’s just one of many reasons to be proud of this Saturday’s 7th-annual event. In 2013, the OK Party Comedy tour and Louder Than A Bomb poetry slam were added to the festivities, and return this year for a third appearance apiece. The alternative programming provides a break for those looking to add variety to their day, and another feather in Maha’s cap.

With a turnout set to break records and a fun, glowing atmosphere (and Atmosphere), Maha looks more and more like a festival that merits national attention. For now, here’s to another successful weekend.

Tickets to Maha Music Festival in Aksarben Village are still available at $50, and can be purchased here. On Saturday, those jump to $60. One all-day pass grants access to all 12 bands on both stages, the OK Party Comedy and Louder Than A Bomb Poetry Slam Event, a community village full of exciting organizations and vendors and the ever-popular ferris wheel (RSVP here).

Use our preview guide below to prepare for each of the 12 acts over 12 hours.

The Omaha hip-hop duo of emcee Scky Rei and DJ INFNTLP is a punch-in-the-mouth way to kick off a festival. Its new EP, BOTHsucks, is possibly the densest Nebraska EP in 2015, combining imaginative production with thoughtful, biting commentary on partying and drug use and introspection and self-awareness. It’s an act constantly on the quest to find itself, and as it winds up to perform in front of the early crowd, it seems to be drawing nearer all the time.

The Lincoln-based rock quartet of vocalist Cortney Kirby, guitarist Aaron Galvan, bassist Alex Drvol and drummer Zach Zoellner have been on fire in 2015. It released a debut full-length, Don’t We All. The band has toured extensively already, and plans a month-long jaunt across the Midwest with New York punks American Pinup. Toss in two music videos, an addition to the Sept. 3 Trapt billing at Vega in Lincoln, and now a Maha appearance, and it makes for a fantastic run. With Kirby’s captivating stage presence, the dual riffs of Galvan and Drvol and Zoellner’s furious drumming, the group — Maha’s only capital-city act — should make a strong showing in front of a larger audience.

It’s really silly and pointless to fall into a pattern of describing punk rock bands with Ramones comparisons just because you can. But with full-on fuzzy distortion and straightforward 4/4 time coupled with punk veteran Mary Timony’s (Helium, Wild Flag) bummer-scene-setting lyrics, and the line connecting the two draws itself. The D.C. trio of Timony, bassist Betsy Wright and drummer Laura Harris adds its own bit of cool into the classic garage rock sound. The group released its first LP, Rips, late last year.

The sunny beach pop quintet from Toronto released its self-titled debut LP in July 2014, and Alvvays’ outlook has been rosy ever since. The LP topped college charts the next month, adding to the indie-cred head of steam gained by touring with the likes of Peter, Bjorn and John and The Pains of Being Pure at Heart. Vocalist Molly Rankin’s dreamy, dreary vocals sound as if a moody Dolores O’Riorden was born two decades later, in California instead of Ireland.

Formed in 1985 near the genesis of alternative rock, The Jayhawks fill the older-rocker slot that in the past has included J. Mascis, The Flaming Lips, The Millions and Domestica. The alt-country fivesome was largely influential in its hometown of Minneapolis before calling it in 2005 after 20 years and seven studio albums. The band reunited in 2009 and release Mockingbird Time two years later. The Jayhawks appear Saturday as the band’s 1997 iteration.

All Young Girls Are Machine Guns is sometimes a single singer-songwriter on her ukulele, and sometimes a seven piece doo-wop and soul band. Saturday, attendees will get the Omaha soul outfit full bore, complete with powerful female vocal harmonies and fleshed-out brass section. Formed back in 2009, AYGAMG has taken the last five years to develop its sound from a mish-mash of pop, jazz, country, and blues and fine tuned it into a consistent sound.

As has become custom, Vintage Paisley, formed out of this year’s Omaha Girls Rock sessions, will appear at the midway point.

What started as Sadie Dupuis’ summer-camp solo project in 2011 has blossomed into an indie-darling foursome. Speedy Ortiz’s 2013 full-band debut album, Major Arcana, scored “Best New Music” on Pitchfork Media, and the band released its second LP, Foil Deer, in April. Dupuis’ songs often start like a leisurely neighborhood walk, but soon the boundaries blur and come unglued by searing guitar leads and a pounding rhythm section that threaten to swallow her whole.

The Rhymesayers duo of rapper Slug (Sean Daley) and DJ Ant (Anthony Davis) have been at it since 1997. The group’s eighth studio album, 2014’s Southsiders, was recorded in south Minneapolis and Oakland and is a shout-out to their native neighborhood. While it is a celebration of Atmosphere’s fortitude, it is also deeply introspective. The group’s unique sound — featuring vibrant, live instrumentations and Slug’s often-weighty subject matter — continue to push indie rap’s boundaries.

Emerging out of an eight-year hiatus, The Good Life has never been afraid to switch up their sound, refusing to be ascribed as one thing or another. Tim Kasher’s lyrical content and deliberate, for-project songwriting remain the common thread across the band’s 15 year run. On forthcoming Everybody’s Coming Down, The Good Life experiments musically like never before, less ebbing and flowing from song to song than dunking the listener’s head underwater for a spell before yanking them back up. Meanwhile its frontman sticks to familiar lyrical themes of hopelessness, longingness and nothingness.

In a wave of garage and indie rock bands, Purity Ring stands as Maha’s lone “danceable” option. The Canadian duo of Megan James and Corin Roddick dwell in a dark, eerie corner of EDM, filling the vacuum around Roddick’s production with James’s robotic yet strangely comforting vocals. Its latest LP, Another Eternity, was released in February by British independent record label 4AD.

When Maha music festival crowdsourced for possible headliner candidates last year, bringing the indie rock stalwart to Aksarben Village seemed like a pipe dream. But fans lit up social media in favor of Modest Mouse, and the campaign apparently gained enough steam (along with hard work by organizers) to secure them to the bill. Modest Mouse comes to Maha fresh off the April release of Strangers To Ourselves, its sixth full-length album. It is a Modest Mouse album in every sense, a direct (if delayed) follow up to 2007 LP We Were Dead Before The Ship Even Sank. Expect the songs to explode in a live setting, and with all of the anticipation — built even before the band’s confirmation — expect the crowd to follow suit.

Louder than a Bomb Poetry Slam