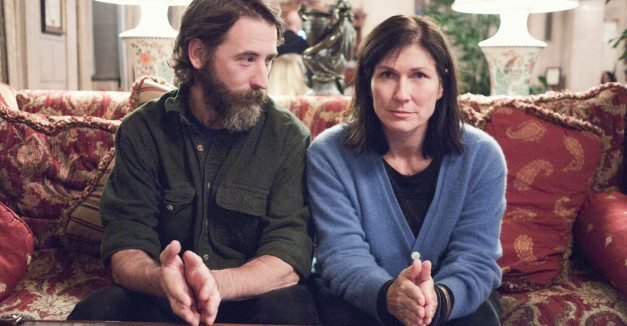 Catching an artist via phone the afternoon of a touring show, responses to a simple, “So what’s going on?” can vary.

Maybe: “Just had lunch at this taco stand we hit every time we’re in Oklahoma City.”

Maybe: “I’m good,” not bothering to hear or humor the question.

Kelley Deal’s mind goes immediately to the friend she and Mike Montgomery, the other half of R. Ring, are staying with that night. It’s in Corrales, New Mexico, a half hour north of their tour stop in Albuquerque. It’s beautiful there, Deal says.

In three decades on the road, as the guitarist for ‘90s indie stars The Breeders (with her twin sister Kim) and leading projects like The Kelley Deal 6000, it’s fair to assume Deal might have a friendly connection in every major American city. From her home base of Dayton, Ohio and spanning outward.

When R. Ring and Montgomery (known for his band Ampline) come to O’Leaver’s tomorrow night, it’s just such a social connection that firmed up the show with Miniature Horse and Gothko. RSVP here.

The last time R. Ring toured through Nebraska, playing The Waiting Room in 2012, Montgomery and Deal crashed at the home of Laura Burhenn (The Mynabirds), who took them to Isa Chandra Moskowitz’s house for brunch the next morning. At the time, Deal had no idea Moskowitz was a subcultural celebrity in the cooking world, for her successful line of vegan cookbooks.

Hitting it off, the R. Ring song “Salt” was later featured in a Moskowitz video, and the renowned vegan chef recommended O’Leaver’s for tomorrow’s show. The club, of course, is physically connected to Moskowitz’s new restaurant, Modern Love.

In carrying itself, R. Ring seems fundamentally based on an approach to music from different eras, interacting with the online music world only where it makes sense, where it feels humanistic.

On the one hand, Deal quite enjoys Twitter, where she’s active, engaging with fans about music and her knitting work.

But that lives beside a fiercely obscure kind of DIY-ness, that doesn’t just constitute nominal label independence. R. Ring’s available releases have been limited runs of hand-crafted 7-inches and singles. No binding record deals. No articulated plans for longer recordings. No overarching feeling that anything acutely official is coming.

In describing her reticence with other forms of social media, you get the feeling Deal’s remarks could be extended to blogosphere communique and the culture of streaming music, in general.

“… Updating all of these things, it takes a while. I just find it kind of boring,” uttering that last adjective in a kindly apologetic tone. There’s maybe a trace of knowing other artists self-dutifully bog themselves down in those channels hours each day.

Deal is playful and forthcoming on the phone, as she describes the bridge from R. Ring’s first thrust of touring and releasing music in 2012 to today, separated by a Breeders tour in which Montgomery came on board as a guitar tech for the band.

“Do you think he’d want to be a guitar tech?” Deal recounts the story in a high-pitched impression of the band’s tour manager.

“And she’s Australian, that’s why I’m doing this accent,” she laughs.

The imitation is in a youthful soprano, like her singing voice. And it’s mostly convincing, certainly a map pin somewhere in the British Empire of dialects.

Deal says she relishes in the chance to jump back and forth between projects. Her sister Kim and The Breeders’ Jim Macpherson have been rehearsing and writing new songs recently, which she, as an instrumentalist, sees happening from afar. It’s both stimulating and burdensome to be the voice of your band.

“I was just talking to Kim about this,” Kelley says, “[She was] spending the tour trying to not talk so she can sing and have it feel effortless and good. [Kim] spent a lot of time on [the last] tour making a sad face. And I’m talky-talky! Beause I’m just playing guitar, man.”

In R. Ring, Kelley has vocal duties in publicity and musical senses. The songs wind and entrance, and find her concentrating her hardest to date on the exposed vocal parts. On the recordings, you hear a zen-like focus to her falsetto and the high range of her chest voice, as she and Montgomery bond guitar lines. Hers is snakey and melodic, not unlike Breeders’ songs, and his percussive and guiding.

It’s spare, but not simple. In fact, structural complexity is a must for R. Ring to work in a live setting, Deal says.

“If we start writing songs in four-four with the accent on the one and the three … Man. Holy yawn. That’s not gonna fly.”

The traveling, the stages in small clubs across the nation are still key to the larger arrangements of Deal’s life. She lives in Dayton for all the obvious economic reasons a working artist might reside in the Midwest, but also simply: “Home is where your family is.”

But nor would that fly were she not on the road so much, hacking away at a job, sometimes wishing it were more of a roadtrip.

Deal notes she’s never been to The Grand Canyon. And it doesn’t seem like this swoop through the Southwest will allow the time either. Next go-round.