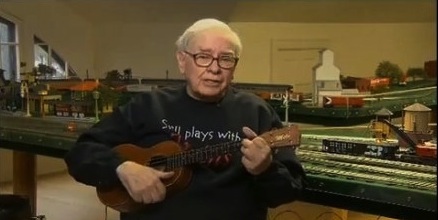 What inspired Warren Buffett to learn to play the ukulele?

It’s a tale as sweet as a Dairy Queen ice cream cone: In 1949, the 18-year-old future billionaire was home from college for the summer. He’d been attending the University of Pennsylvania but would soon transfer to the University of Nebraska. Warren took summer classes and worked a couple of jobs—supervising paperboys in the rural communities around Lincoln and selling men’s furnishings part-time at an Omaha JC Penney’s.

He’d also developed a crush on a girl named Betty Gallagher. Unfortunately, Betty had a boyfriend and wasn’t interested in Warren’s attention. Warren sized up his competition. What did Betty’s boyfriend have that he did not?  He came up with only one answer: a ukulele.

So he bought himself a uke, learned to play and serenaded Betty. The result? She still chose the other guy.

Yet Warren stuck with the ukulele, frequently playing in the JC Penney’s basement before his shift while other employees sang along. His ukulele chops came in handy the following year when he fell for a young Omahan named Susan Thompson, though he faced a similar dilemma at first: Susan was dating someone else.

Warren bided his time. He’d drop by the Thompson residence, and he struck up a friendship with Susan’s father Bill. Bill played the mandolin, and so Warren would often bring his ukulele along on visits. As Susan left to go out with friends or on a date with her boyfriend, Warren would spend the evening strumming tunes with her father.

After graduating, Warren moved to New York to attend Columbia University’s business school, yet whenever he returned to Nebraska, he would call on the Thompsons. Upon completing his master’s degree in economics in 1951, he moved back to Omaha, where he began spending more one-on-one time with Susan (or “Susie,” as he called her). Eventually his courting attempts—of Susie and/or her father, depending on how you look at it—worked. Susie and Warren wed in 1952.

The couple had three children—Susan, Howard and Peter—and bought a home in Omaha’s Dundee neighborhood in 1958 (it’s the same home that Warren lives in today). When the young Buffetts attended or hosted a dinner party, Warren was known to entertain guests by talking about stocks or playing his ukulele. Their son Peter, an Emmy award-winning musician and composer, told NPR in 2012 that Warren would often sing around the house, mostly classics from the 1930s and ‘40s. He really liked Glenn Miller.

Susie was a singer, too. Once their kids grew and moved out, she decided to hone her vocal skills. Susie’s nephew Billy Rogers, a jazz guitarist who played at Mr. Toad’s, Spaghetti Works and other Omaha venues, made a few instrumental tracks for her, and she started practicing by singing along and recording herself. She started singing at private parties with a local band, the Bob Edson Trio, and soon began receiving invitations to perform publicly. She was nervous at first, but Warren encouraged her. She eventually became a regular chanteuse at the French Café, a restaurant in the Old Market, where she sang cabaret and jazz tunes. Warren loved watching his first wife perform. “When Susie sings, it is so beautiful I can’t breathe,” he once told a friend.

More than 65 years have passed since Warren first picked up the ukulele. In that time, he’s worn many hats: husband, father, investor, Berkshire Hathaway CEO, billionaire, philanthropist. He’s been dubbed “The Oracle of Omaha” and, according to 2015 Forbes Magazine rankings, is the third richest person in the world.

And he still plays the ukulele.

Berkshire Hathaway’s annual shareholders meetings (or “Woodstock for Capitalists” as these gatherings have been called) attract nearly 40,000 people from around the globe to Nebraska, and attendees have heard Warren play on multiple occasions. So have guests at numerous fundraisers and benefits, such as those organized by Nebraska Furniture Mart, Forbes and Fortune. Warren’s ukulele skills have been seen on Chinese state television CCTV, where he appeared to wish viewers a happy new year, as well as on CNN’s “Piers Morgan Live” and NBC’s “Today Show.”

He has performed duets for charity with Jon Bon Jovi and Glenn Close, and this past April, an autographed ukulele he played at a Texas fundraising event for cancer survivors was auctioned for $25,000.

He’s turned some of his friends on to the instrument, most notably fellow billionaire Bill Gates, who Warren supposedly taught to play “Twinkle, Twinkle Little Star” as a lullaby for his then-infant child.

Warren also counts musicians Bono and Jay Z among his friends. With a shared interest in philanthropy–particularly concerning issues of global health and poverty–Warren and Bono have been close for many years. When Warren’s granddaughter was married in 2013, Bono flew to Omaha to sing at her wedding.

Warren and Jay Z met at a Forbes 400 Summit when they were asked to speak together about success and giving back. Jay Z guest-starred on an episode of the “Secret Millionaire’s Club,” Warren’s animated show for children that teaches good financial habits. Warren has also attended events in support of Jay Z, such as the 2012 re-opening of the hip hop mogul’s 40/40 nightclub in New York.

When it comes to performing, Warren doesn’t shy away from the spotlight. He has joined his son Peter onstage, making guest appearances on Peter’s 2008 tour, and has sung Sinatra tunes with Paul Anka. He’s even cameoed in commercials for Geico Insurance, one of Berkshire-Hathaway’s companies, dressed as an Axl Rose-inspired rocker.

In the ukulele community, Warren is recognized as a dedicated player. In a 2013 interview with the Omaha World Herald, musician Jake Shimabukuro (who’s often referred to as the Jimi Hendrix of the ukulele) said, “[Warren is] a serious player, man. He knows his chords and he knows his tunes.” In other interviews, Shimabukuro has expressed his delight in knowing that people like Warren and Bill Gates have an affinity toward the ukulele: “It blows my mind that these people, who have everything in the world they could want, have picked up the ukulele and found a little bit of joy.”

Shimabukuro is not the only performer to have acknowledged Warren’s dedication to the instrument. In December 2008, record producer Robert Greenawalt and composer David Barratt staged a tongue-in-cheek “benefit” concert in Brooklyn called “For the Benefit of Mr. Buffett.” The two invited guest artists and musicians–including Warren’s son Peter–to join them in performing ukulele-accompanied versions of every Beatles song in the 184-song catalog.

Warren may have seemed an unlikely recipient of a benefit concert, especially in the midst of the Great Recession: Why should folks raise money for him? And what connection existed between a bunch of Beatles tunes and Warren Buffett? According to organizers, the answer was the ukulele. Greenawalt has attested that all Beatles songs were meant to be played on the uke, and Barratt has initiated “Beatles Complete on Ukulele,” an ambitious re-recording project of every Beatles tune. Knowing that Warren, the richest man in the world at the time, was a passionate ukulele player, the two decided to hold the concert in his honor.

Fueled by playful irreverence and irony, Greenawalt and Barratt’s project lasted more than 14 hours and included 67 singers, 37 musicians and a Yoko Ono impersonator. They raised “hundreds of dollars”–$344.23, to be exact–and documented the project in this video, which includes a quirky conversation between the organizers and Warren about his affection for the ukulele.

Greenawalt and Barratt felt more confident in Warren’s abilities to wisely donate the money raised from their event than their own, so they handed over the funds to him (in a brown paper bag, no less). Warren used the proceeds to purchase 17 ukuleles from Dietze Music for the Omaha non-profit organization Girls Inc. After presenting the instruments, Warren also gave a lesson. Girls Inc. ukulele players have since performed publicly at the University of Nebraska Omaha and other Omaha-area events.

Though he is known to play Mele and Oscar Schmidt ukuleles, Warren also owns one of two custom-built Dairy Queen ukes. Designed by Gary Peare of Tesser and built by luthier Dave Talsma, both ukes were given to Warren in 2006 (fitting, as DQ is one of many Berkshire Hathaway holdings).

Warren kept one and signed the other (his autograph reads, “Warren Five Fingers Buffett”), which was auctioned to raise money for the Children’s Miracle Network Hospital in Omaha. It went for more than $11,000.

Four strings, more than six decades of strumming and a lot of big numbers behind dollar signs raised and gifted for the greater good–not bad for a guy who picked up the uke simply to impress a girl. Perhaps what Jake Shimabukuro says is true: If more people played the ukulele, the world would be a better place indeed.