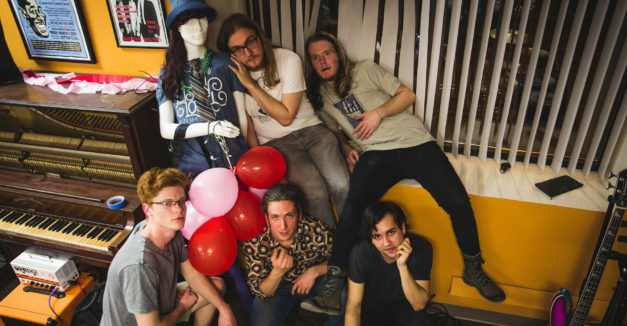 [The following was prepared for The Ambulanters’ on-air introduction prior to playing Hear Nebraska FM. Technical difficulties pushed the band’s start time to the final 10 minutes of the show. Imagine it as a live read. A brief Q&A follows. The Lincoln quintet releases its debut EP, Leave The House, Friday, May 13 at Chez Hay. RSVP here.]

Based solely on the talent of a music scene, there are two broad ways to determine its strength: by its established acts, and its up-and-coming ones. Break it down further by genre and gender and myriad other factors if you’d like, but suffice it to say broadly, in terms of who’s arrived, that Lincoln’s scene is stout and strengthening all the time.

But what about it’s future? In baseball, the prospectus of a team is based largely on its “farm system,” or series of minor leagues in which prospects work their way up to the Majors, honing their skills all the while. Though in a way, Lincoln has its own proving grounds, and fortunately for us, there are more than nine spots in a music scene. Consider acts like the band before us, The Ambulanters, akin to other sprouting ones like Mesonjixx, Better Friend, I Forgot To Love My Father, This Machine Kills Vibes. In bands like these, you have in place the building blocks for the next few years.

There are a number of characteristics to look for in a “prospect” that all of the aforementioned bands share.

Versatility? You bet. The Ambulanters’ — comprised of guitarists Jim Rhian and Sam Costello, keyboard player Mike Rhian, bassist Robert Specht and drummer Jarvis Davis — has been described as “post-folk,” but a recent concertgoer has seen the band spread into various volumes, styles and energy levels far beyond its perhaps out-dated classification.

Deference? Of course. During HN’s fifth annual Take Cover Lincoln — the same evening that Better Friend romped through Desaparecidos — Specht took front-and-center stage to give what can only be described as a shocking yet thrilling Teal Gardner imitation for the band’s cover of “GRIPS.”

In all, The Ambulanters are distinct descendents of a prior generation of revered Lincoln musicians, poised to grab the torch and usher in a new era. It has already started, with handfuls of recent shows and a forthcoming record release Friday, May 13. That’s at a downtown catering space at 14th and P with three of the aforementioned bands — a surprise to maybe no one, as aside from sharing members, they share a small stake in the future of Lincoln’s music scene.

Now, here is The Ambulanters with “Sweeper” and “The Storm”

Hear Nebraska: I met you guys over the last few months, some of you when IFTLMF came on. But a large portion of our listeners probably don’t know you. Give me the short version of how you formed?

Jim Rhian: We formed out of the remnants of a few different projects. Sam Costello and Jim Rhian met when we formed our first serious band, On Approach, which very early on featured Michael Rhian as a drummer for a short while, and in the last few years Robert Specht graced us with his cello playing. After recording our second EP, we ended up calling it quits. Around the same time, I had begun playing guitar and keyboard for Guilty Is The Bear, where I first encountered Jarvis Davis. Guilty Is The Bear went defunct as well, giving us an opportunity to pursue new creative outlets, and it was only natural for Sam, Robert, Jarvis and I to begin playing together. We wrote and practiced, playing sparingly for just under two years, until we decided to bring Michael into the fold.

HN: JP Davis filmed a live video with you all at The Big Hole in October 2014, on the cusp of your fourth ever show. How would you judge your growth since then?

JR: In the time between that video and now, the most noticeable change our band underwent was the addition of Michael Rhian, playing both the keyboards and percussion. Our music took quite a turn with the addition of a second drummer, and another melodic instrument, happening seamlessly together. It opened up a lot of possibilities for all of us to play more subtle and interesting parts. Writing and recording has consumed most all of our other time.

HN: Jim, you told HN before Take Cover Lincoln that a local barista mistook you for a Nebraska guitar legend. Tell us about that?

JR: Once while working a shift at Meadowlark Coffee and Espresso; a customer mistook me, after I told him my name was Jim, for UUVVWWZ guitarist Jim Schroder, whom I very much admire. I’ll admit I was hesitant to inform him of his error, but so it passed. Within the week, the very legend himself came into Meadowlark, which I couldn’t help but laugh about.

HN: Robert, knowing how wonderfully eccentric Gardner was at the mic with UU, how did you prepare for that?

Robert Specht: I had been preparing for that moment since 2009, when their self-titled album came out. 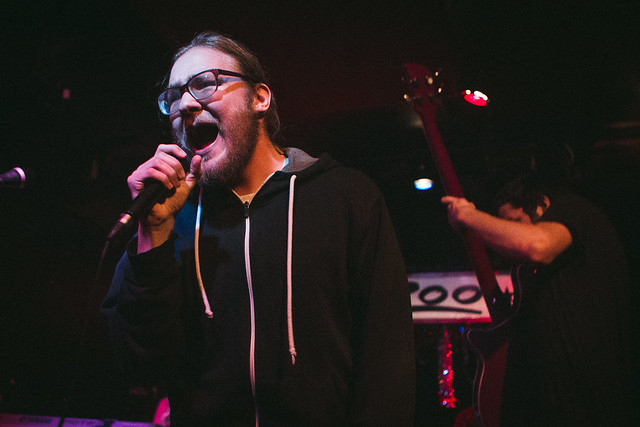 HN: What were some other Nebraska bands you grew up listening to that have found their way into your sound?

JR: Kasher and Oberst’s works, along with much of the Saddle Creek scene. Low Horse’s EP is gold.

HN: You recorded with producer Sean Joyce, at his studio. What was that process like?

JR: Recording with Sean was wonderful. We had prepared pretty extensively, and he was very open to what we wanted to do with our record. We had some very specific ideas for the guitars and effects, and our drum setup required some outside of the box engineering and mixing, which he definitely stepped up to. We are very proud of the finished product.

HN: What can we expect from the new album?

JR: Thrashing and grooving inside of a good cry.