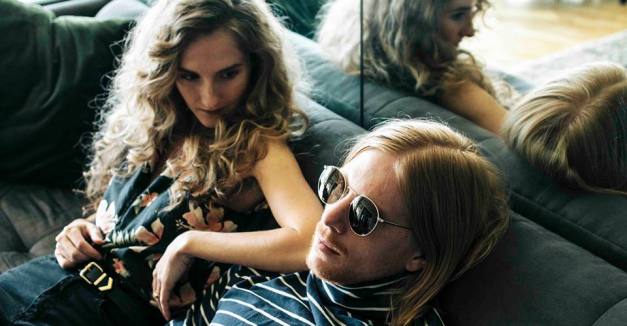 In an era when online streaming services like Spotify are a dominant force in music consumption, Tennis frontwoman Alaina Moore is one of many musicians lamenting the experience of the full album falling by the wayside. In fact, she yearns for the album-listening parties of her college days.

“I would buy a record and my friends and I … would go lay out under the stars and bring speakers outside and listen to a whole album beginning to end and just experience it,” Moore says. “I literally don’t know anyone that consumes [music] that way anymore.”

As the vocalist/keyboardist of Denver pop group Tennis, joined by her husband and guitarist Patrick Riley, Moore says she’s noticed a shifting landscape that favors the image and marketing of a musician — and creating a hit single — over the creation of a complete album.

“That means you only need one song and then a really good look, and you can get really far on that,” Moore says.

In the past, Tennis has been tightly bound to their origin story. Critics have written extensively of how they sold their possessions post-marriage and went on a seven-month sailing trip up the Eastern seaboard. While no doubt influential, informing their debut record, Cape Dory, the story and album together led to their critical pigeonholing as a “yacht rock” band.

On their 2014 full-length release Ritual In Repeat, Tennis has created a fuller sound while exploring more in-depth subject matter, a vast departure from their prior work. They play tomorrow at the Waiting Room in Omaha. RSVP here.

To fuel their transition, Tennis enlisted the services of three name producers: Black Keys drummer Patrick Carney, Spoon drummer Jim Eno, and producer Richard Swift (The Mynabirds, Foxygen, The Shins), each of whom worked on separate parts of the album. Swift’s resumé suggests a perfect fit, while Carney’s influence is tangible on album opener “Night Vision,” where the bump-bump of the bass recalls his own band’s work before yielding to a dreamy hook. Moore explains they sought each out specifically, so there’s a common thread that runs through the album, even with three different production philosophies.

“[With] Patrick Carney, we would start very foundational and examine everything under a microscope,” Moore says. “Whereas with Richard Swift … we would do more live takes with a lot of commitment. He would be more after just the sound and the vibe, the feeling of the performance was kind of privileged over everything else.”

Thanks in part to their choice production team, Ritual In Repeat sounds more developed than Cape Dory or Young & Old. The ‘70s pop atmosphere of the new record offers a foundation for strong vocal melodies and a layer cake of instrumentation. Moore’s self-proclaimed favorite track, “Needle and a Knife,” bounces along into a three-part vocal harmony that sends the chorus soaring into sweetly plucked guitar and gliding keys in the post-chorus break. The hazy disco nightclub sizzle of “I’m Calling” follows, again showcasing Moore’s emerging vocal confidence bolstered by Riley’s sharp lead guitar and grooving bass lines.

Jim Eno produced the album’s rhythmically swinging fifth track, “Bad Girls,” which provides a case study not only for the album itself and for the band’s writing style. Most often, Moore and Riley write songs individually while the other offers their instrument (Moore’s vocals or Riley’s guitar) to complete the other’s track. The pair’s individual musical tastes, at odds from the beginning due to Moore’s largely classical music upbringing, have become so divergent since the band’s inception that such a system has become necessary.

On “Bad Girls,” Moore wrote all of the lyrics, melodies, and chord progressions, leaving Riley to place the finish touches.

“He worked really hard to write this beautiful guitar part and this solo and build it into something more contemporary,” Moore says. The result is a soulful slow-dance led by Riley’s building riffs over which Moore displays the depth and breadth her vocal range.

The song is also deeply personal for the vocalist, focusing on the rigid morality instilled during her Christian upbringing and how her experience since has blurred those lines.

“I discovered that the world is very ambiguous, that things aren’t that simple, and it’s kind of just been this long unfolding reaction to that,” Moore says. “I spent a lot of time thinking about rightness and wrongness and identity.”

That sentiment, constantly searching for both the source and alleviation of her own moral schism, is echoed in other places throughout the album, as well. On “Night Vision,” Moore sings, “Looking past the street lights and the colors they obscure/straining for that visions for a glimpse of something pure,” as if both sorrowfully and inquisitively searching for truth.

That search certainly extends to their place in the evolving music industry. In Moore’s view, the giant cultural identities of, say, the Kanye Wests and Taylor Swifts of the world, have created a disappearing middle ground that leaves independent artists with interesting choices to make about how to earn a living.

“We feel pretty overwhelmed by the change, because we’re still operating in that old-fashioned world of writing a record,” Moore says. “I think that in order to be fulfilled with what we’re doing, we need to have that freedom to experiment and I don’t think that it’s very easy to market that.”

Even in an environment that favors the hit single or catchy hook for an Apple spot, Tennis feels much more at home with creation on their terms. When asked if their new record represented a conscious effort to break away from the oft-told story of their inception, Moore explains that it’s less a desire to craft an image than the result of their own natural musical evolution.