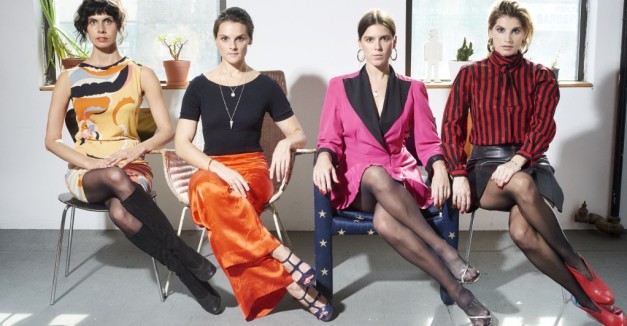 [This feature interview previews TEEN’s March 31 appearance at O’Leaver’s with Naytronix and Icewater. The show starts at 9 p.m., tickets are $8. RSVP here.]

Teen has battled one major puzzling conflict throughout its entire existence. The Brooklyn-based dream pop quartet is composed entirely of women — both a hook by which media and listeners identify them and a cloud hanging over their professional career.

From her tour van, frontperson Teeny Lieberson’s excitement bursts through the phone as I raise the issue so many interviews tend to lean upon. On one hand, she says it’s validating to hear from fans inspired by their work because of the band’s all-female composition. But that can’t be, and isn’t, Teen’s only redeeming quality.

“It’s good and it’s bad,” Lieberson says from the passenger seat of the band’s touring van. “I think the negative part of [being a female group] is when it literally becomes your genre. To say female music is a genre is completely ridiculous.”

A helpful bandmate takes the wheel for Lieberson as she chats for a few minutes. The Brooklyn-based band — comprising the sisters Teeny, Lizzie and Katherine Lieberson and Boshra Al Saadi — is heading to Baton Rouge, La., the next stop on their Love Yes Tour. That album, a synthpop feminist masterpiece, dropped Feb. 19 on Carpark Records. Teen plays O’Leaver’s, 1322 S Saddle Creek, March 31 (RSVP here).

As the conversation continues, Lieberson outlines a brief history of what the last few years have done to shape Teen as a band and slightly more extensive history of their relationship with the “all-female group” label.

Teen’s six-year catalogue charts the conscious materialization of strong female empowerment, from their lo-fi beginnings on Little Doods to the synthpop power-feminist vibes on Love Yes. The record focuses on the female experience in relationships and society in general.

It leads off with “Tokyo,” its female subject struggling with agism and her potential of joining the First Wives Club as her husband’s eye wanders, set to a dancy beat with driving vocals and irresistible melodic harmonies. Then “Another Man’s Woman,” where Lieberson writes about a woman exploring her sexuality and how that contrasts with her unspoken duty to be a “decent” wife. She laments, “what a shame,” over and over while she questions her own piety.

This dissonates sonically with “Free Time,” a Devo-esque, punchy piece about a woman’s need to satisfy her id. Unlike the slow unraveling of an unfaithful wife in the song prior, “Free Time” is aggressive in the way that makes the listener want to cry — and at the same time, mimic the subject’s every move. They insist, “yeah, I think I’ll have a drink on the hour!” as if they assume you will oppose, or worse yet, try to deny them.

The trials faced by Teeny and her bandmates in the past year are not reflected in their music, but definitely made their mark on the album’s creation. Over a year ago, Teen’s van was broken into and much of their equipment was stolen. After recovering their equipment and finishing their 2014 tour, Teeny felt her creative energy dissipating.

“You can’t be positively-generative all of the time, it’s just not natural, ” Teeny says.

Incidentally, it was Lizzie who wrote the album’s hopeful yet tormented first single, “Please.” She outlines relations with her father, classical music composer Peter Lieberson, and questions left unanswered in his passing. “Oh won’t you talk to me, yeah scream if you want, but please…” she pleads. As Lizzie was writing, Teeny isolated herself in a cabin in Kentucky to focus. The bulk of the record came from her extended songwriting sessions in seclusion.

The themes on the album are apt considering the makeup of the band, and there’s a part of them that enjoys the mythical “female music” characterization. Their lyrics connect deeply with their thoughts on the topic of feminism, but “female group” comes up often when critics describe the band. While accurate, it’s a double-edged sword.

“(Being) set apart (as a female band) can be positive,” Teeny explains, “You also just want to be recognized as a band.”

When asked where we are on the issue,Teeny says there is an upswing of females in the music industry which may be causing a downswing in what some think of as the “niche” category of females in a male-ruled industry.

Sexism in the music industry is not always limited to categorization. The next time you go to a concert and are pleasantly surprised by women on stage, you are experiencing the source of Teen’s conflictedness. While attention based on their gender (from both sexes) is inspiring for the band, Teen might ask that you take a step back and wonder why that detail pops out. Consider whether you’re enjoying them as a novelty which artificially adds a layer of excitement, or an accomplished assembly of musicians creating despite the stigma.

Brigitte Speicher is an elementary school teacher and first-time HN contributor. Reach her through HN’s managing editor at andrews@hearnebraska.org