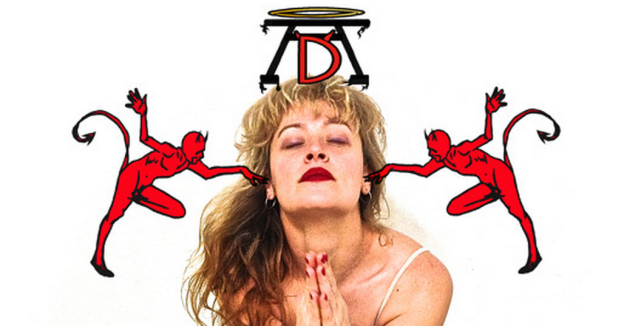 If it sounds like there are classic punk rock fingerprints on the new sounds from Lincoln’s Angel and The Devils, you guessed right.

The Nebraska trio’s new record, with the first release premiered below, was tracked at SST Studios in Taylor, Texas, the homebase for canonical punk band Black Flag.

A tastefully blurry lo-fi-ness is hazed atop the speedy two-minute punk song, given some anxious soul by singer Angel Settell’s deep, emotive voice. Through its short bursts, “Swimmin’ In It” always threatens a freakout, part of its allure, but comes cooly back to center with the title murmured in alignment with its hopped-up drum part.

RSVP to Saturday’s Zoo Bar album release show here. The billing also features Baker Explosion and Super Blues Party. You can also catch Angel and The Devils on June 20 at Omaha’s The Sydney.

Before the song, a few credits from the players of the two-year-old Angels and The Devils. Scott Trampe, who’s been known to play guitar, bass and sometimes drums in this project, has played in a slew of bands, including The Lucky Ones, the Fallenseventyseven, One Punch Homicide, Ha shaitan, Officially Terminated, Psycho 78, Skullskowski and Haggard Mess. Drummer JJ King’s credits include Pressure Drop, Mustaché, 4020, the Fallenseventyseven and more. And Settel’s prior and other projects include Howloosanation, the Fallenseventyseven, Useful Monster, Adventure Boat, Mannix Cattle, Drunken Text and more.

Now, here’s the premiere of “Swimmin’ In It”: