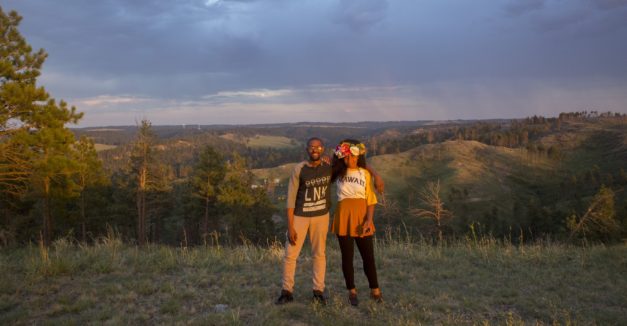 This HN Live video runs thanks to support from the Nebraska Game & Parks Commission.

The trails that lasso around Chadron State Park tour the enterprising hiker through some of the finest scenery Nebraska has to offer.

Start within the park’s center, amid cabins and open campground. Take a trail westward to the park’s southern edge, up one dusty hillside and back down into a small meadow lush with prairie grass. Head toward its northwestern corner, traversing another steep incline, and emerge atop one of the park’s higher elevated bluffs, where a large cluster of pines remain charred from a fire that four years ago scorched parts of the park and nearby national forest. The vista from Spotted Tail Shelter spans for miles — a hiker may double-take before realizing they are still in Nebraska.

On a warm August afternoon, first bathed in sun then quenched by an oncoming storm, the bluffs of Nebraska’s first state park, established in 1921, served as a stage for Mesonjixx’s ode to the beauties of nature. Mary Lawson’s voice is an instrument on its own, soulfully singing the joys of summertime as Kekeli Dawes baps a groovy beat.

Watch the duo’s performance inside Chadron State park below. Look closely enough, and catch a glimpse of the unexpected.