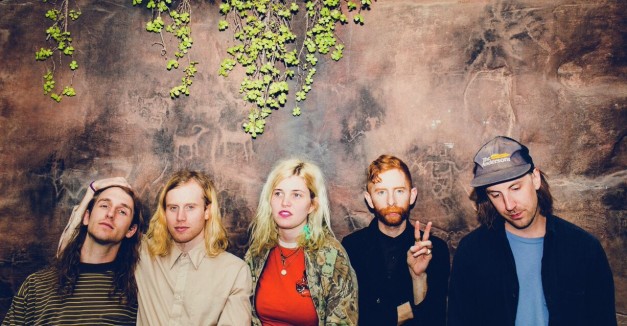 The opening line of Saintseneca’s new album reframes, maybe reverse-proves, a sentiment that populated the Columbus, Ohio band’s prior record. Whether the perpetrator is fate, self-abuse, falling objects or just time slowly pulling your card, our bodies are coming in for a beating.

“I defy the stars above to bash our milky heads in,” singer Zac Little warbles to start the title track of Such Things. He defies, yes, but detailing the image’s violence feels more like an astronomical invitation.

Such Things, out earlier this month on ANTI- Records, goes to the same school of pensive thought and musicality as last year’s Dark Arc, though it’s worked to a higher volume of instruments, sounds and surprising ways to say that we’re fragile beings. The new album is an ample second helping of producer Mike Mogis’ abilities and the musical prowess of Saintseneca’s five incredibly busy players. (Steve Ciolek and Maryn Jones are in the acclaimed and rising punk rock bands The Sidekicks and All Dogs, respectively. And Jon Meador and Matt O’Conke are in the lesser known Tin Armor.)

For a Wednesday show at Reverb Lounge, Saintseneca returns to Omaha, where it made Such Things at Mogis’ ARC Studios. And audiences will see if the band’s skinny, often acoustic-anchored, live show is bulked up by this increasingly layered new record. RSVP to the show here. The Sidekicks and another Maryn Jones project, Yowler, will open the show.

Such Things feels like an album of first thoughts, not because it’s at all haphazard, but because its album-bound commonalities seem like the result of following up on new instincts: the ones you develop from being a new band on the road for a year. And these 15 new tracks feed Saintseneca’s seemingly endless appetite for plucking, strumming, harmonizing, oblong poetry and pop songwriting. As with any 15-track record, you might have trouble commemorating love for every song. The pleasure, and for that matter the existential pain, is in the journey through the melodically accessible and the thematically distant. In multiple songs, Little’s voice – more of a thought explicator than a narrator — breaks into doubt, asking, “Who am I to ask the questions?” His nasally, verbose voice may be distinct, but it still wonders as to its own candidacy.

And across Such Things, it’s hard to say where Mogis’ influence shows up the most, though the credits reveal it’s at least in the presence of additive instruments, like pedal steel, marxophone and hammered dulcimer. Little, for his part, added about a dozen more. Really, take a look.

But you have to think Mogis is absolutely crucial as officiate to the marriage of simple pop-rock with the whims of a small, bizarro acoustic orchestra. You need the album’s sonic digressions and depth to keep the 13th track feeling like a gallon of water in a necessary pool and not a late entry to a growing list.

The marriage works best on songs like “Sleeper Hold” and “Bad Ideas,” where the chorus hooks pull the verses into focus. The latter song gathers up the poetic beauty of Little’s musings — ”Tell me this / if our sun is / arborist or arsonist” — into ear-worming vocal swoops.

Those moments are plentiful, and the way to enjoy Such Things is to be along for the ride. If you’re looking for a statement or a proclamation record, try an album that isn’t titled how you’d trail off while describing spare thoughts: “[This] and … such things…” But as a handcuff to Dark Arc, and an example of intellectual, structurally interesting pop, it’s as idiosyncratic as a bulbul tarang, and as reliable as a strumming guitar.