It’s OK to color outside the lines. Roughly, that’s the modus operandi of The Crayons.

Bassist and vocalist for the Lincoln quartet, Matt Wynn, says it, perhaps amused with the elementary-school cheekiness of the phrase. But really, if there’s a cohesive message or concept to The Crayons’ progressive punk, this one seems fitting.

It’s no surprise to see guitarist Brett Kelly, also of the Omaha-based psychedelic metal band Webb, churning out chromatic guitar riffs, or to see Wynn, who played in the now-defunct Solid Gold, a band that once dressed up as Russ’s Market employees on stage and said their sound was inspired by the smell of cat piss, performing, face painted, with rigorous and goofy enthusiasm.

But trumpeter David Tysdal’s presence does fall somewhere outside the lines that generally might trace the shape of a punk-metal band.

On stage, Tysdal works as much as a hype man as he does musician, dancing spastically when he’s not playing. The footwork is by no means technically impressive, as Tysdal bounces back and forth, slackened arms swinging whichever way momentum takes them, but it is unabashed, unconcerned with appearance, working almost as example and encouragement to The Crayons’ audience: don’t just watch politely, dance like you play trumpet in a metal band.

It’s the first in a pair of albums The Crayons have written; recording and releasing Orange is next on the band’s to-do list.

The album titles correlate with colors. Some shows feature coloring pages and crayons for the audience. Every now and then, each member dresses up as a different color crayon, and Wynn’s bass amp is painted like the standard five-set Crayola box. On Wednesday, Tysdal will take the shade of the green crayon, Wynn is always blue, Kelly maroon, and drummer Josh Kornbluh, also in Root Marm Chicken Farm Jug Band and Handsomer Jaws, the yellow crayon.

In a sense, it’s conceptual. But The Crayons aren’t hemmed in by any serious commitment to building the band’s version of reality. 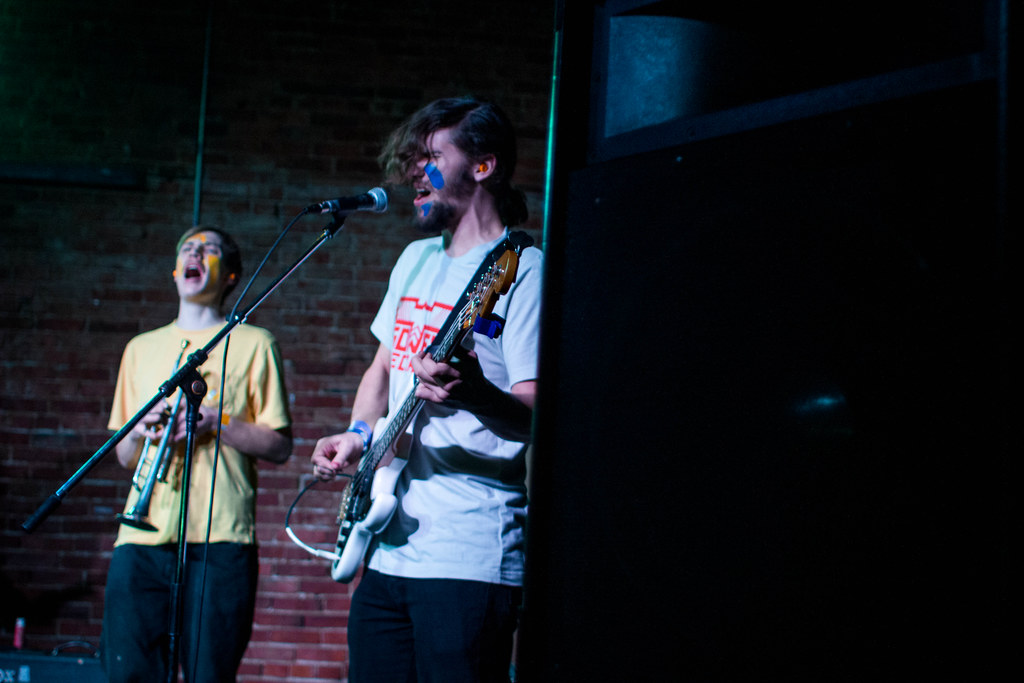 Fun like drawing a pentagram with a pink crayon on Minnie Mouse’s forehead, maybe, which might not be that far out of The Crayons’ realm.

The Crayons dabble in twisted Christian imagery with songs like “Satan was Framed.”

“We were all raised Catholic,” Tysdal says. “There’s that joke about recovering Catholics, I think it’s an irreverence that comes from growing up like that.”

“Jesus was my Friend” gives a voice to Judas Iscariot in the vein of inverted fairy tales like The Last Ringbearer and The True Story of the Three Little Pigs, finding empathy for the demonized character based on a mistrust in perspective.

“Judas feels bad about it,” Kelly says. “He didn’t really know what was going on. They used him as a pawn to nail Jesus to the cross. Judas is my patron saint.”

Kelly bought dozens of metal St. Judas medallions online for the band to wear at their next show.

“I just think that rock bands singing about Satan is an established funny thing,” Wynn says.

A band that traffics in humor and emphasizes fun isn’t necessarily a joke band, though, not in the way that Tenacious D might be considered one. Both “Satan was Framed” and “Jesus was my Friend,” at least in concept, make a compelling statement about subjectivity in storytelling.

And it’s not all religious distortion. Wynn has a pocket-full of songs that, while not performed without The Crayons taste for the peculiar, fall in a more personal realm.

“A lot of the non-satanic lyrics, it’s pretty dark stuff that I wrote when I was really depressed,” Wynn says. “I think it’s funny to perform those songs in such goofy ways.”

After the Crayons release Teal, and later Orange, they want to continue in the same direction. Wynn, a student at the University of Nebraska-Lincoln, says he looks forward to summer when he and Kelly have generally found the most time to write music.

“I want to get Orange out, write 12 songs to replace that,” Kelly says, “and then release an album every four months. That’s the best goal. Eventually someone has to listen.”