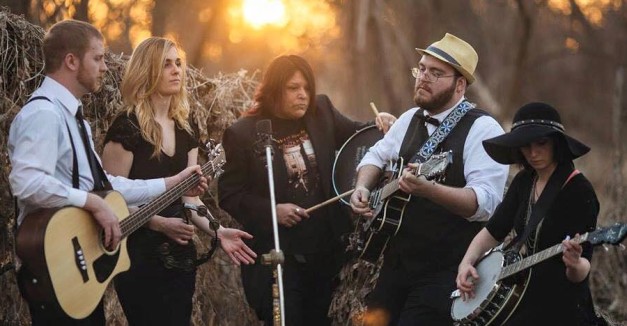 On May 9, I found myself at The Waiting Room to support some of my bandmates and songwriter friends in Edge of Arbor and Belles & Whistles. I’d seen the name of the headliner, Pleiades & the Bear, start to pop up on bills around town, but hadn’t seen any write-ups or real self-promotion to give me a clue as to what I should expect.

I arrived to The Waiting Room to find an unusual amount of fellow musicians there to support the show. The majority of them, from what I understand, are regulars of Aly Peeler’s Open Mic Night (currently at The Tavern), where the band has been gathering their legs. I was greeted at the bar by Pleiades’ then drummer Roselle Ledesma (Will Holdcroft has since taken the reigns of the rhythm section). She beamed like a mother hen and told me the band was anxiously awaiting the show in the green room. It was to be most of their first time on the big stage.

Pleiades (pronounced Plea-uh-deez) closed out the night with an outstanding set. The songs were interesting, felt orchestrated and purposeful. A lofty mix of vocal harmonies, bluegrass-tinged instrumentals and a thoughtful rhythm section gave the five-piece band a vibe resting somewhere among Phox, My Morning Jacket (they did a solid cover of “Golden”), the Gaither Vocal Band, and felt a little like being surrounded by an audible production of the O Brother, Where Art Thou soundtrack. It was a sort of Appalachian Southern Gospel Indie, with Daniel Butler as the Southern Gospel Preacher, Karmen DeLancy and Victoria Blodgett the Choir of Angels, and Roselle and her rhythm section the Truth. They got their message out to an engaged room — hardly a body at the bar  — and this at The Waiting Room (which, if you’ve never played, is like trying to herd cats). Keep an eye out for these cubs. I tell you, in six months if they get in some good stage time, they’ll be unstoppable.

I managed to contact Butler for a copy of their EP Still The Night. The five-song stunner gave me a clearer picture of what I believe the group is trying to accomplish (it looks like there will be a full album follow-up in the coming months). I grew up in the church, singing from hymnals, listening to The Gaither Vocal Band on TBN, listening to impassioned preachers with their redemption songs, and while Butler told me they were reaching for a more literal Bluegrass-driven, foot-stomping edge, I can’t help but feel this EP is drawing from a certain musical heritage that is maybe purely accidental to them. The songs are not inherently Christian, nor are they preaching the Gospel, but if you grew up subscribing to that belief, there are one of few cultures you find yourself immersed in, and you feel the ghost of it here. This is not at all a loss and nothing to be afraid of.

It looks like DeLancey and Butler do the lion’s share of writing, but the songs are certainly a group effort. Butler’s writing on songs “Love In the Valley,” “Straight and Narrow,” and “Still the Night II” do give these songs that more literal bluegrass-driven, foot-stomping edge he spoke of, whereas DeLancey (who has writing credits on all the songs of the EP saving the previous mentioned “Straight and Narrow”) brings these songs their tentative approachability. DeLancey’s influence is the morning fog in the trees, the Emmylou Harris/Gillian Welch/Alison Krauss siren’s song, her influence facilitates unfettered and effective vocal harmonies and pairs engrossing lyricism with a meandering, dreamy musicality. The one thing that seems to be sorely lacking on the EP (although it makes a quiet appearance on “Songbird”), and that I hope will be added to the full album is Blodgett’s banjo. Live, it fills out their sound, but I believe in the intimate setting of these recorded songs, a little more banjo would serve to support the idea that this is, in fact, a bluegrass outfit. It is Ledesma and Jon Knobbe’s rhythm that bring the deliberate, decisive, and “indie” feeling to these songs. While sticking to traditional train beats when necessary, Roselle breaks from the expected when she can, and the songs are better listening for it.

One last note: While I imagine we’re supposed to assume Butler and his booming voice is the bear, I pose that it’s DeLancy. Check them out with me this Friday at The Waiting Room Lounge for the Omaha Entertainment and Arts Awards Summer Showcase and tell me different.