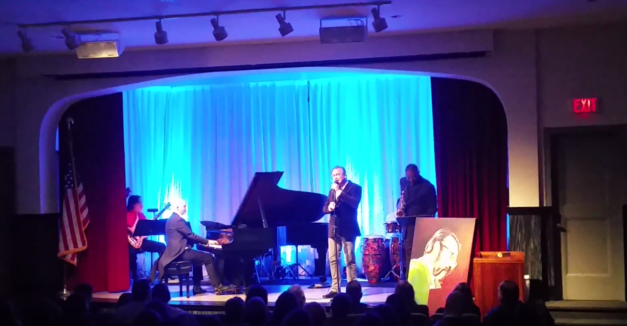 It took the death of a music icon to bring Stephen Sheehan back onto a stage for the first time in 10 years.

Clad in a white t-shirt with “ᖷuck Canser” plastered across its chest, the former frontman of defunct Omaha post-punk band Digital Sex, joined Omaha tribute band Bennie and the Gents in its January 2016 David Bowie tribute show at The Waiting Room. He took the mic and offered a rendition of the late singer’s “The Jean Genie” just one week after his death.

Following the show, Sheehan took to Facebook to share his gratitude for the chance to sing live again.

“thank you. all of you. that was massive for me. fucking massive,” Sheehan posted, along with a photo of him on stage replicating Bowie’s Heroes album cover pose with one hand across his chest and one toward the sky.

Sheehan hasn’t regularly played in a band since 2002, when Omaha ambient pop band Between The Leaves broke up. In a recent phone interview with HN, he says he has floated the idea for years of a retrospective show with songs spanning his career, but he’s never been fully inspired to do it. That is, until the “Bennie do Bowie” show.

“My activity has been cyclical,” Sheehan says. “I’ve been really, really active, and then there have been longer stretches where I’ve been dormant. Getting involved with Bennie and the Gents sort of reignited that activity.”

Sheehan returns to the stage with a full band on Friday, Aug. 18 at Reverb Lounge to revisit his prolific back catalogue of music from his Omaha bands Digital Sex, The World and Between the Leaves.

Of the three bands, Digital Sex goes back deepest into Omaha rock history. The post-punk trio, which formed in 1983, released its only studio album, Essence, in 1985 on the band’s Post Ambient Motion label. The band went through a number of breakups and drug-induced conflict, and the record struggled to find airplay in Omaha.

Oddly enough, however, Essence somehow reached and impressed a small record label in France. In 1986, Sordide Sentimental Records released an extended edition of the LP, titled Essence and Charm, which combined all of Essence with drummer Dereck Higgins’ solo material.

The record garnered positive reviews from The Los Angeles Times, Interview and Reflex magazine, and it received airplay as far away as Pittsburgh. The Pittsburgh DJ re-released Essence in 1994 with a number of rarities tacked on; it was aptly titled Essence and Rarities. The compilation spurred a short-lived reunion for the band, but soon fizzled, and the band has been dormant since.

But after Sheehan’s first Bennie and the Gents show, he said crowd members came up to him, prying him for a steady return to music.

“I heard that for years from well-meaning people, and I never really gave it any serious consideration,” Sheehan says. “But this time I just started to. I thought if I don’t do it now, then when would I?”

For Friday’s show, Sheehan recruited a quartet of long-time Omaha musicians with Dan Crowell — from Digital Sex’s 1994 lineup — joining on drums and guitarist Ben Sieff, bassist Randy Cotton and keyboardist Donovan Johnson joining from Bennie and the Gents. Each member is an Omaha scene veteran in his own right, uniting backgrounds from hardcore bands like Ritual Device (Cotton), metal outfits like Nightmare (Sieff) and indie groups such as Guerrilla Theater (Crowell) and The Matrix (Johnson).

“When I first saw them, it was evident to me that their musicianship was sky high,” Sheehan says of Bennie and the Gents.

But while Bennie and the Gents’ objective is to precisely perform each song as they sound on record, Sieff says he and the rest of Sheehan’s band intend to re-interpret rather than recreate each song.

“In many ways, our approach is to do [the songs] the way they would have been done today, which makes them feel very fresh and new,” Sieff says. “I think it’s a great snapshot of where the bands may have evolved today.”

And unlike Sheehan’s past musical projects, the band’s collective years of experience have translated into a cooperative unit that has avoided any “speck of drama or crisis.” With the pieces of the band in their right places, Sheehan’s just left to execute the show he envisions, which is calculated down to the opening band and the show’s date.

The show falls the night before Maha Music Festival, not to mention Lady Gaga’s Omaha concert. With a huge weekend of live music already on tap, Sheehan saw it as a no-brainer to add his show to the mix.

“I thought ‘why not have this the night before Maha so we have a weekend of interesting music to attend?’” Sheehan says. “I just thought I would contribute my small part to a great weekend of music in town.”

Omaha’s The Sun-Less Trio opens the show, adding its jazz-tinged rock to the dream pop and new wave that defined much of Sheehan’s career. Given the band’s avant-garde ethos and frontman Michael Saklar’s history in Ritual Device, The Sun-Less Trio’s inclusion will set an apt tone for the show, Sheehan says.

Sheehan will preserve that tone with a set that he expects to span close to fifteen of his songs, plus a new one that Sheehan labels a “pop” song that most clearly recalls the early work of Digital Sex.

So, finally, after more than a decade after his departure from the music scene, Sheehan is back on stage and writing new music. But this new project’s future is still up in the air.

“There are no plans after the show,” he says. “At this point, this is a one-off performance, and I wanna gauge the interest, frankly. People ask me ‘are you gonna keep doing this?’ Hell if I know.”