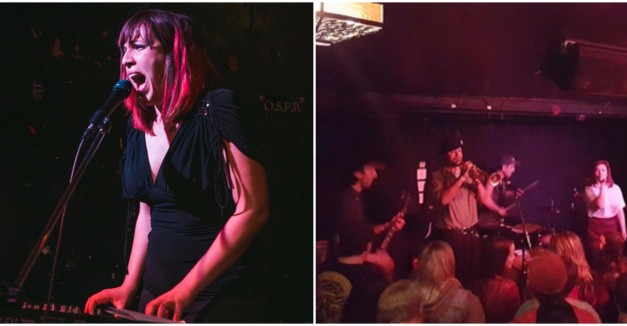 I could hear the punching sounds of Lincoln ska group Mad Dog and the 20/20s from the sidewalk as I approached its practice space near 33rd and Vine streets. It was a cold and bitter Monday night, but the band waiting inside was quite the opposite.

Frontwoman Madeline “Mad Dog” Christensen opened the door with smiling eyes, leading me past the shameless post-Super Bowl kitchen, down the stairs and into the small backroom of her and band/room mate Jarett Eaton’s basement. There, I found five of the six 20/20s, who’d put their practice on pause to welcome me in.

“You might need these,” drummer Anthoni Antillon said with an outstretched arm, offering me a pair of headphones which I respectfully declined. Ten minutes into Mad Dog and the 20/20s’ loudly energetic practice set, I realized that perhaps I should have taken his suggestion.

The young 20/20s come from a string of common places and interests, four of them from Kearney, Neb. Since June 2015, these small-town ska lovers have fearlessly inserted themselves into the Lincoln scene. Mad Dog and the 20/20s will close out Lincoln Exposed this Saturday at Bodega’s Alley at 12:20 a.m. RSVP here.

Just one year ago, bassist Danny Peck moved from Kearney with high intentions of pursuing music.

“At one point it seemed like a pipe dream to start a ska band,” Peck said.

Peck didn’t realize this so-called pipe dream would become a reality, even after he and Eaton played in a punk band together in Kearney. The two of them also befriended Antillon, but didn’t cross paths with Christensen until they all met up in Lincoln.

After Eaton approached Christensen about leading vocals for the group, her yearning voice soon became the missing piece to the puzzle. Later, the 20/20s were completed with the brassy additions of trumpetist Wil Gleason and Nick Brady on the tenor sax.

Christensen says the 20/20s owe it to their friends and family back in Kearney who’ve given them endless support, and to the Lincoln scene that’s welcomed them with open arms.

“The music scene in Lincoln is great,” she said. “A lot of bands have just came up to us and asked to play a show together. It’s not like we had to go knocking on doors.”

They group is playing a handful of upcoming shows in Lincoln, Omaha and Kearney, and they’re excited to announce their CD release show with I Forgot To Love My Father and The Ambulanters, happening at The Bourbon in mid-April.

As Mad Dog and the 20/20s sat around a coffee table cracking PBR’s and jokes alike, it became clear this group is more than just bandmates.

They laughed while telling the story behind their name, which came from a bottom-shelf wine called “MD 20/20.” They raved over the term “skanking,” which “isn’t what it sounds like,” they emphasized, just a form of ska dance.

Peck put it simply: “We wouldn’t be doing this if it wasn’t fun.”

The Morbs: Reaching a Physical and Musical Community 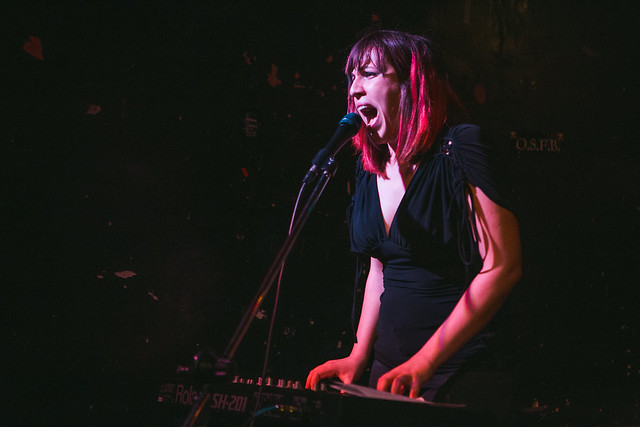 Maya Khasin has been hustling on a new community project for the last couple of months, one that would merge communities both physical and musical.

It’s called Porchfest, an outdoor event modeled after the noted Ithica, N.Y. festival in which musicians play all over the neighborhood. The goal: all-inclusion.

“I wanted something that’s all ages and all people across the neighborhood could participate in that people would feel represents the neighborhood,” says Khasin, who plays synth in Lincoln/Omaha garage trio The Morbs.

Like many of her fellow Near South Lincoln residents in the midst of the South of Downtown project conversation, her neighborhood pride swells along with her contempt for outside influence. What actual good is a revitalization project if it doesn’t account for the needs of its current inhabitants?

“It drives me nuts when people call it the ghetto,” The Morbs synth player says, her frustration with mischaracterization palpable. “I thought it would be nice to have Porchfest in the area where SoDo was supposed to be, just to be like ‘look people care about this neighborhood.’”

Just south of where she envisions Porchfest, I meet Khasin on a sundrenched Saturday afternoon in a bustling Meadowlark Coffee. It’s one week before The Morbs’ Zoo Bar set at Lincoln Exposed (RSVP here). I ask, and she gushes about the opportunity to see so much in one weekend, and to be a part of it.

“You could’ve knocked me over with a feather,” Khasin says.

For Khasin, it’ll be the first time at the festival as a performing musician. She and bassist Chelsea Egenberger began jamming over the summer after discovering their mutual interest. The two were at a Root Marm Chicken Farm Jug Band show (Chelsea’s brother Ian fronts the band), and in talking about starting one of their own, her current bandmate told her she’s kind of a punk rocker.

“I was like ‘Oh man I don’t know if I have the street cred to pull off punk rocker,’” Khasin laughs. “So we settled on garage.”

Her comment is at least partly in jest, but still I ask about their meeting in the middle, stylistically. They play a bouncy, out-front brand of garage rock, and lyrically it’s quite quirky, with references ranging from snarky gender-norm and social commentary to internet comments sections and house pets. But their collaborative mindset opens room for creativity.

“It’s not like a compromise where we don’t do what we want, we just kinda try to follow each other’s’ instincts,” Khasin says. “God bless, they let me write songs about cats.”

The pair soon joined forces with Manic Pixie Dream Girls drummer Monica Maher, and at first planned to take things slowly. Maybe play a show that autumn. Then Egenberger was contacted by Do-It-Ourselves Fest organizer Margot Erlandson about bands to fill the live-music lineup. She jumped at the slot.

“It was a bunch of poetry, acoustic stuff and us,” Khasin recalls from the SP CE Commons show. “[They] asked people to get up, ‘We are going to have a rock show now.’”

Khasin admits to being a little self-conscious when it comes to talking about the band. Her background is in piano, and at times she feels more comfortable discussing classical music than garage rock. In essence, it’s about respect. She holds her bandmates’ talent and creativity in high regard.

“Every time I’m tempted to be insecure or not confident in my own abilities, I sort of have to realize that that reflects on them too,” Khasin says. “And I’m really confident in their abilities.”

Khasin’s enthusiasm about performing tomorrow night echoes her community mindedness. Lincoln Exposed provides a unique opportunity to communicate a message and receive feedback, no matter how personal or widely applicable the message.

“Songwriting is … both public and private,” Khasin says. “People write songs that they feel need to go out into the world for one reason or another, and that can be really personal. But when you perform it it’s a public thing that everybody participates in. That’s a really special thing to be a part of.”