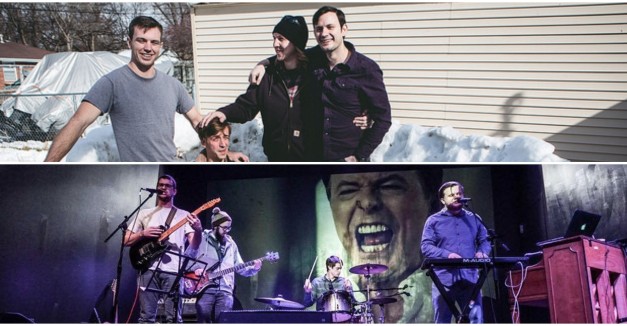 In the 70-plus-band Lincoln Exposed tidal wave, it’s easy to forget that, like every year, some acts will be onstage for the extravaganza for a first time. Even more so with the addition of Bodega’s Alley, another first for the downtown festival.

Yet here they stand, ready to break into the spotlight of the scene. While these bands are certainly not unknown or inexperienced, the spectacle of such a crowded four-bar event is a different animal than the average show.

To help capture the moment, our editorial team sought out a few first-timers for brief chats. In the first of a two-part series, we hung out with post-rock quartet Cassandra and the Told Ya Sos and funk band The Magnetic Souls at their respective practices. Read on for their stories (and watch for part two Thursday).

Cassandra and the Told Ya Sos: Fighting the Playfully Incessant Ringing

It was New Years Eve, hours before Cassandra was due to perform in the Tree House basement, and drummer Dan Sullivan’s ears were ringing. So much so that he was becoming nauseated.

Per custom, the four-piece practiced in the basement at Sullivan’s home in Lincoln’s Witherbee neighborhood, as they do before every show. Crammed into the cinderblock furnace room, and missing earplugs, the ringing was progressing quickly.

By the time the show started, it was almost unbearable. His bandmates say he was grinning stupidly trying to hold back vomit. He finally cracked, begging guitarist Tim Gaydusek to cut the volume.

“I was rattled,” Sullivan says, nodding and smirking.

Sitting in the living room above their practice space on a gloomy Sunday afternoon, it becomes remarkably clear how much shit these guys give each other, mostly because of their long friendship history. Though Cassandra has only coalesced as a band within the last year — playing its first show last Spring at The Bourbon, where it’ll play Thursday for Lincoln Exposed — its members have lived together in some combination throughout the last few.

A half hour earlier, before packing into the backyard snow fort for a photo and before gliding dreamily through two of its shoegazy numbers, I catch the first glimpse of their playful ribbing. Martin, Gaydusek and bassist Dylan Pester tune up for practice, surrounded by empty coffee cups, nursing hangovers. Sullivan waltzes in, half-feigning irritation.

“I really thought I just cleaned this place,” he says pointedly.

“You did,” Kyle observes. “And then you brought a bunch of derelicts over.”

That somehow translates to musical chemistry, apparent from the first glistening, reverb-drenched note. Gaydusek and Sullivan have played together the longest, adding Martin to the mix after watching him plod his way through video game tutorial Rocksmith. He says he played maybe three chords during that first session. Sullivan carefully suggested variety.

“I immediately got lessons,” Martin confesses. “It was so embarrassing it propelled me forward.”

Cassandra completed its lineup about 18 months ago with Pester, who also fronts Lincoln metal band Kill It With Fire. His dynamic instrumental abilities allowed him to click right into place.

As they describe it, their experience thus far sounds like what many bands endure in their early stages: jamming a new riff that blossoms into a song, crashing and burning in public on another. But it’s a humorous, self-deprecating attitude that helps keep things in perspective.

It’s why Martin can joke about Sullivan chiding them to stay on task when the rest of the band gets too excited about success, even in the basement. It’s best not to get too out of sorts, lest the ringing in your ears takes over.

“‘You guys are so full of your own shit,’” Martin mocks.

Sullivan shoots back: “I’m preparing you for real life, Kyle.”

The Magnetic Souls and the Lasagna of Funk

The Magnetic Souls meets in its practice space, accompanied by Zip Line brews, a Willie Nelson poster and a Bigsby guitar on display.

The Magnetic Souls future goals include playing more Omaha shows and “ruling the world.” This funky four piece will meet the Bourbon stage Wednesday at 11:40 p.m. for its first ever Lincoln Exposed set.

“We’re playing before Shithook,”  Placzek said. “So that’s like the biggest honor of all.”

After sitting in on a song or two this past Sunday, I noted The Magnetic Souls is a band of equal parts. The eclectic sounds of this new-found group are apparent in their single, “Where Are My Drugs?” where they combine funk and soul with progressive rock. From Morris’ snapping fills and thuds to Schultz’s nimble beats, The Magnetic Souls bridge gaps between multiple genres, but their sound can be described with one word: “danceable.”

Placzek’s role on guitar and vocals is a new endeavor for the multi-dimensional rock artist who previously played drums and bass in other musical projects. Placzek shares the mic with Mason, whose laid back bass notes bring a jazzy flair to the group.

In the past three months, The Magnetic Souls have been working hard on songwriting, and will take a short break to record several singles in the next month. The group says they’ll be back playing shows by March, comparing the recording process to a slow-cooked comfort food.

“You know, it’s kind of like cooking a lasagna,” Mason chuckled. “Recording takes time, but when it’s finally done it’s so delicious.”