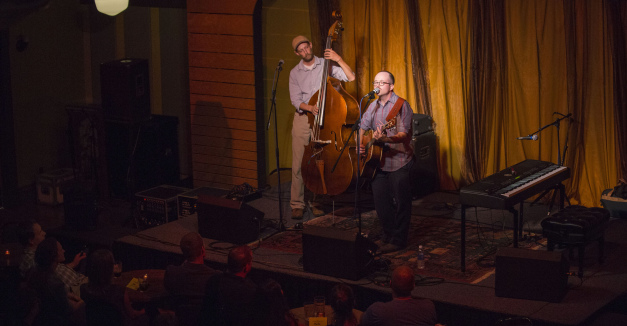 When I talk to Nick Talbott on the phone in September, The Talbott Brothers are on their way to Johnson Lake, 15 miles south of Lexington, to play a show at the Lakeshore Marina, a waterside bar and grill that hosts weekly live entertainment on a deck over-looking the water. The next night, they’ll be 50 miles north, playing Sylvester’s Lounge in Broken Bow.

It’s a working man’s bar with cheap drinks and a dark and smoky atmosphere even years after Nebraska’s smoking ban banished all the cigarettes to the bar’s patio.

Nick and his brother Tyler originally hail from Imperial, far enough to the west end of Nebraska that it’s closer by an hour to Denver than it is to Lincoln.

On Sept. 19, the folk-rock band played Mac’s Creek Winery and Vineyards in Lexington.

In late September, they’re playing more familiar city names: Denver, Laramie, Boise, Portland. The Talbott Brothers have made a habit of hitting those places with a trip to the East Coast in 2013. You know, cities. That’s where bands play, right?

Take Skrillex. The pioneering dubstep artist played an outdoor show in downtown Lincoln to around 1,400 people on Oct. 16. The night before, he played in Boulder, Co. Two nights later, Chicago.

Skrillex and just about every other musician that tours the Midwest must, at some point, drive Interstate 80 through the Platte River Valley, the 500-some miles between Omaha and Denver. And no honest person has called it an interesting drive.

The problem with driving the valley is that it’s maybe the country’s best place for an interstate — almost mind-numbingly flat and straight. But if you’re on the road to play some shows, there’s a reasonable cure for those flat-line blues in the form of all the mid-sized towns scattered along it: Hastings, Kearney, Grand Island, Lexington, North Platte, Ogallala and, if you’re willing to deviate a little, Broken Bow, Holdrege, Gothenburg, Scottsbluff and more.

If you draw a north-south line through York, around one million people live to the west and while it’s something like 61,000 square miles of space, those scattered towns are connected by highways, commerce, high school football games, families. It’s a tightly-woven network.

So why not split that drive up? Skrillex, stop in Kearney or somewhere and sell out a show to scores of people too far from both Lincoln and Boulder to make it to the show.

Muriel Clark, North Platte’s Assistant Director of tourism, says that towns along the interstate could make themselves viable tour stops.

“If venues can generate a loyal following for weeknight concerts, they’ll have no trouble getting bands to stop over on off-nights,” she says via e-mail.

A night and partial day off in Chicago is great. There are museums, an impressive lake and skyline, great bars and food and an odd metallic bean-like structure in which you can see yourself. But for an uninitiated touring band, those scattered, practically isolated towns strung loosely to I-80 offer something else, maybe rarer, in terms of experience.

Ask Nick Talbott and he’ll talk about the people.

“It’s such a community thing in smaller towns,” he says. “Everybody gets involved.”

In those music-sceneless communities that populate the miles of mostly-agrarian land between Lincoln and Wyoming or Colorado, the occasion of an out-town-band coming through is rare, monthly at best in many places. That’s a stark difference from Lincoln, Omaha, Denver, Des Moines, Kansas City and others, where national offerings occur nightly.

“The hardest part is getting bands here the first time,” Fred Schumacher, owner of Sylvester’s in Broken Bow, says. He tries to host bands monthly, more if he can, but it seems like there’s a small pool of bands that know Broken Bow (and by extension, so many places like it) is an option.

Lincoln’s Emmett Bower Band and Omaha’s Matt Cox Band have made recent stops there. Paisty Jenny, Kris Lager Band, The Innocence and more have made a habit of Sylvester’s.

“But once the play here, they like it. They want to come back.”

And, he says, if the band fares well the first time, they can expect a bigger and bigger crowds each time they come back to play the small stage tucked into the corner of the bar without a dedicated sound engineer.

To Lager, playing a small town doesn’t have to be any different from playing Denver or Omaha or Kansas City.

“People everywhere just want to congregate and have their spirits lifted,” he says.

Play a show at a place like The Listening Room in Hastings (where Hear Nebraska hosted Omaha’s McCarthy Trenching and locals The Mrs. Dunbars this summer), and expect a warm crowd, gracious crowd.

The audience, around 60 people for the McCarthy Trenching show, sits around small round tables pressed close to the stage, candles on each flickering an intimate ambience. To the rear, a rich stained-wood bar built by the the venue’s owners serves a full roster of drinks. 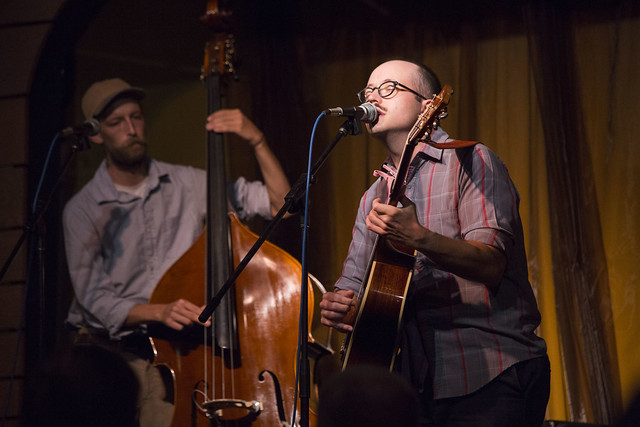 McCarthy Trenching at The Listening Room

Robin Harrel, who books The Listening Room concert series, located at The Lark, says she typically books three to six months ahead. Knowing what her audience will take to is part of her job.

Tastes vary geographically. Roots, Americana, country and rock are overwhelmingly favorite genres, the kind the Talbott Brothers and Kris Lager Band play. But, as Harrel notes, other genres, like electronic music and hip-hop, haven’t really been tested in many out-state Nebraska venues.

“We haven’t booked a band like that before, but I’m leaving that door open,” Harrel says.

As someone who books everything from classical music to jazz to bluegrass to rock music, she says a performer’s personality and accessibility is more important than the type of music they play.

Likewise, Schumacher says he’s been trying to book a wider of variety of acts, a gamble he hopes will pay off. On Friday, he had Cornerstone Dub, a reggae act.

As is the case with many facets of the independent music industry, no one is going to get wealthy touring the rural Nebraska circuit, but in a relatively gas-friendly touring van, you’ll spend about $126 getting from Omaha to Denver in gas alone.

Break that up. Pick up $50 or $100 (the average range for what The Listening Room pays opening acts) in Hastings and suddenly bearing that cost is not so dire.

“Venues must be more receptive to hosting live music, week-in, week-out and paying bands whether or not they break even,” she says. “Bands have to understand that they’re part of building the foundation for live music in the future and if they have lucrative gigs (in Omaha or Denver), then reducing their fees to an affordable rate.”

Clark helps put on NRoute summer music series at Fort Cody Trading Post’s parade ground in North Platte. The series draws around 100 people each week during its 9-show run, which included Nebraska’s Belles and Whistles and The Littlest Birds from California. She says they offer bands $200, plus lodging and food.

Publicizing shows can also be different in Greater Nebraska. Where in Lincoln and Omaha, drawing a crowd can be as simple as hosting a Facebook event and sending out a couple Tweets, social networking is not as prominent in smaller communities.

But a little extra leg-work on the publicity-end should be worth food, lodging, a healthy financial guarantee and the opportunity to play to connect with a brand new audience.

Greater Nebraska is ripe for those connections — entire towns of people who don’t often have the chance to share the live music experience.

He notes that a well-liked band in Broken Bow can draw people from the area to shows nearby, places like Kearney.

Lager, who has toured as far as China,  says he enjoys playing new, off-the-beaten-path places as a way to serve that community, share an experience with untouched audiences.

“Playing music became a lot more fun once I started making it about the people, not about me,” Lager says.