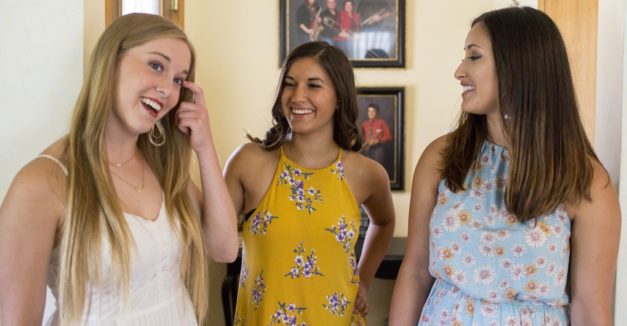 The most familiar song to us as Americans — except for “Despacito”, apparently — is our National Anthem. By the time most of us hit our teens, we have likely heard it countless times, in myriad configurations and volumes, in different settings with varying levels of ostentatiousness and splendor. Especially in the sporting arena, it’s as ubiquitous as home-team colors.

When McCook’s MajorMinor3 sings the Star-Spangled Banner one Saturday afternoon, it is crisp, clean and engaging. The trio — Shelby Stevens, Riley Rambali and Tyler Rambali — weaves their voices into and out of each other in three part harmony, the path of complementary notes taking wide paths to one emphatic, vaulted finish.

Knowing their history, it shouldn’t be a surprise to hear such a crystalline rendition of the song. Aside from the young women’s own original, largely Christian compositions, Francis Scott Key’s ode to the flag is their bread and butter. The trio was named the 2016 Cornhusker State Games National Anthem contest winner, beating out a cadre of in-state choirs, ensembles and vocalists.

Watch them perform the Star-Spangled Banner below.